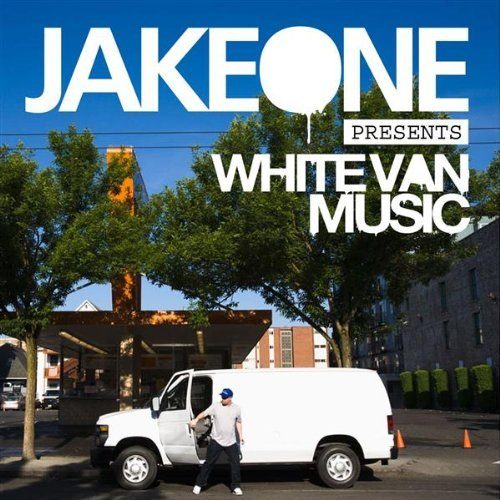 Jake One is the producer you love, but don’t know. You’ve heard his work before, you’ve nodded your head to his music, but you never bothered to check the liner notes to learn his name. His production credits boast everyone from De La Soul, MF Doom, Young Buck, 50 Cent, and John Cena. That’s right, all you wrestling fans can thank Jake One for that tight music played every time Cena hits the ring. Don’t be ashamed if all this is news to you, Jake One just isn’t the type of producer to try to steal the spotlight. The man quietly makes banging, soulful beats that translate into banging, soulful hits. His first solo album comes on Atmosphere’s label, but it still packs plenty of balance and variety. This balance and variety are what make Jake One stand out so much. In a business that is many times divided into underground and commercial, Jake One zips between those two worlds like some sort of musical shape shifter. His official solo CD features everyone from M.O.P., Young Buck, and Freeway to Brother Ali, MF Doom, and Black Milk. There’s definitely something here for everyone.

To run through every dope song on the album would take too much time, but the highlights are very indicative of the high quality found on this album. “Gangsta Boy” features a funky, bouncy beat with plenty of soul and M.O.P. straight tear the track up. Reading the liner notes we find out that this track was originally meant to be featured on M.O.P.’s shelved G-Unit album. It’s a damn shame that album was never released given the dopeness of this track. “The Truth” was the official lead single off this album and features Freeway and Brother Ali trading verses. Believe it or not, Freeway outshines Brother Ali with vicious lyrics:

“All my real fans did you miss him?
These younguns might not know him but they feel him
Freezer starving, I ain’t stopping til the mill-ions
I’m as raw as picking cotton with your bare hands
This is State-Prop gang, Roc-A-Fella fam
I’m your favorite flower’s flower, you can call him and ask him
He’ll tell you that he spit it like I spit it before
this Roc-A-Fella we invented the flow
Was bagging dimes in my cellar when Nas had the tech on the dresser
Now I pass checks to bank tellers, nigga
Philly freezer had a black Smith and Wesson
when black Smif N Wesson started wrecking the show
They was entering the stage, I was entering the stage too
You just start doing it, I did it before
Who you? Free original
I’m in the building with a hardcore vintage flow
I get the dough, I’m the truth”

The beat itself is another dope, soulful concoction. Jake One blends some deep bass lines, funky horn samples, high-pitched voice samples and cascading strings. He drops this musical melting pot over a pounding drum beat to make one crucial track. Street rap fans can also count on “Kissin’ The Curb” where Bishop Lamont and Busta Rhymes trade verses over a g-funk influenced track driven by sparse horns and a synth bassline. The dopest street track comes from Keak Da Sneak who spits his “Soul Raps” over a high-pitched synth-driven track with plenty of funk in the bass. Underground rap fans are not ignored with plenty of dope tracks from the likes of MF Doom, Little Brother, and Casual. MF Doom shows up on two short, but sweet, verbal assaults. Casual sounds reinvigorated as he spits a modern day version of B.D.P.’s “Still #1.”

Jake One is truly a dope producer. There isn’t one weak beat on the 20 plus tracks presented on “White Van Music.” The mixture of emcees is also unique and ideal as there is something here for all tastes. Furthermore, the dope production might even get you to start liking emcees you usually wouldn’t have peeped. Producers have historically had a difficult time with albums, but Jake One shakes that trend and comes through with a hot album. Rappers, underground and mainstream alike, should take note and try to lock the man down before he truly blows up. His new school soulful sound is unsurpassed and he has the ability to make hits. Overall, “White Van Music” is highly recommended to any fan of rap music.