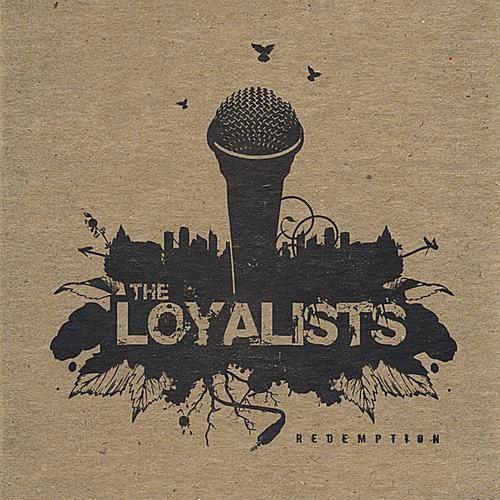 The Loyalists are a hip duo from San Francisco by way of Burlington, Vermont. MC Framework and DJ/Producer E-Train have been making music for over twelve years. “Redemption” is their third album, and their first as a duo after losing third member Touch Phonics last year. Touch Phonics may have officially left the group, but he still turns up as a producer on two tracks on “Redemption,” as well as mixing the entire disc. Clearly, there is no bad blood between him and his former bandmates.

The Loyalists have a background in turntablism, and it shows in the dusty beats that E-Train composes. He bases most of the tracks around a solid, snapping snare drum, and then fills in the cracks with layers of samples, everything from horns to pianos to old soul songs to strings. On the whole the beats are more muted and introspective than banging, but whatever they might lack in dazzle they more than make up for in quality. These are the beats of a true cratedigger, and you can practically smell the musty vinyl coming out of your stereo.

Framework is a skilled rapper, layering his verses with complex rhymes. He tends towards good old fashioned battle rhymes, clearly taking inspiration from classic microphone fiends like Rakim. He makes it clear from the first track that he stays true to the old school, explaining that “with no love, it’s like getting money for sex/and I’d rather make a living off of coming correct.” On “Gasoline” he declares:

For the most part, Framework takes the serious, battle-rap approach, but he lightens up occasionally, like on “Machine Gun,” where he offers up some rapid-fire verbal acrobatics in a golden-age lilt. He is also backed up by guests like the Aztexts, Louis Logic, and Planet Asia. The guests add some welcome variety to the album, and point out one of the (minor) weaknesses with “Redemption”: since it is essentially a two-man show, the record sounds a little samey at points, with the songs not always sounding very distinct from one another. The flipside of that is that the Loyalists’ have a great sound and the tracks are all solid.

“Redemption” is eleven doses of well crafted hip hop steeped in a love of turntablism and golden age rap. Anyone with a love of real hip hop will want to cop this. At the very least, the Loyalists offer redemption from the buckets of mindless, commercial hip hop littering the airwaves.