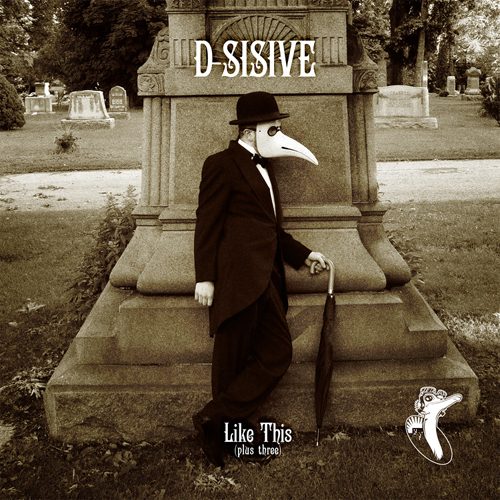 Only a couple of months ago, staff member Nervous wrote a review of D-Sisive’s full-length, “The Book,” giving the release very high praise as a short but sweet effort. Usually when an artist follows up so shortly after the results are usually just scraps from the original project–think “More Fish,” or the more painful “Nastradamus.” D-Sisive manages to avoid the traditional pitfalls of quick follow-ups with a very solid Single/EP in “Like This (Plus Three).”

Kardinal Offishall is currently the most recognized rapper from the Toronto rap scene but that may be a result of him landing on a rap label that is commercially-friendly. Kardi is a fine rapper indeed, but URBNET might have the very best Canada has to offer right here. The disc starts off with “Like This,” which is the marquee track as clearly stated in the title. He works here with two of the underground elite; both the producer/emcee Black Milk and DJ Grouch, respectively. The cuts by Grouch and production by Muneshine compliment each other perfectly as the samples of classic tracks will appeal to almost any listener. The slamming beat builds towards the an aggressive lyrical display, particularly from guest Black Milk:

“What it don’t motherfucker!
I’m against the grain
Shotgun buckle, one pull spills your brains
From the block where they slapbox and pack glocks brutal
Our sidewalks could cook noodles
Pen game insane, I scribble the riddle
Brain untamed you lames cannot drizzle
Official I cannot be stopped
I cause wrecks like Brandy stops
Off ten Brandy shots
Alcoholic gutter emcee
No matter how you call it
Pull guns take wallets
Soon to big like Chris Wallace
Hopefully bigger
Get brolic I choke me a nigga Go loco
Throw away tres ochos
Shoot do-do’s
Hollow tips slay po-po
Decisive Detroit connect
Gunmen waving tech’s when we take your check”

The bass guitar-driven backdrop keeps the head nodding throughout the entirety of the track.

Though “Like This” might be the most entertaining track the others, “Up (Muneshine Remix),” “Flintstone,” and “Outro” seem to have more meaning. The Muneshine Remix of “Up” is a more upbeat (from a production standpoint) reworking of a track of the same name and lyrical content found on “The Book” LP. Check D-Sisive’s stellar second verse over rousing trumpets:

“She looked up
Staring at the ceiling for an answer
The phone rang ignored again
She was too exhausted to speak
And tired of the old ‘gotta stay stronger’ speech
There’s no up to a woman that’s down
So there is no use trying to ‘u’ up that frown
She was given three months to breathe
Which was off by a month and a couple of weeks
Her family saw it as a blessing
All she saw was up, pull the plug
She was never really one to whine
She would just wonder why
She couldn’t be up while the sun was high
Please put me down so I can start my climb
Towards up, I know I’m too young to die
But this is not what I call being alive
She looked up”

This bridges into an equally strong chorus that pulls all of the subject matter together nicely:

The only question mark is whether the beat really matches the dark nature of the track. Surprisingly, “The Flintstones” treads just as somber waters but the ominous backdrop is more effective in matching to the tone of the joint.

Then “The Outro” is a special track because at this point most listeners will be expecting a bunch of meaningless banter over a beat on a track named as such. Not the case here, D-Sisive attacks the beat, celebrating the quality of this excellent CD.

D-Sisive is a name to look out for in the underground hip-hop scene. To me, he has single-handedly reversed all of the negative connotations associated with white rappers from Canada that I originally derived from hearing Snow. Go make a D-Sisive choice to peep some of his material and you will see what we are raving about.

D-Sisive :: Like This (Plus Three)
9Overall Score
Music9
Lyrics9