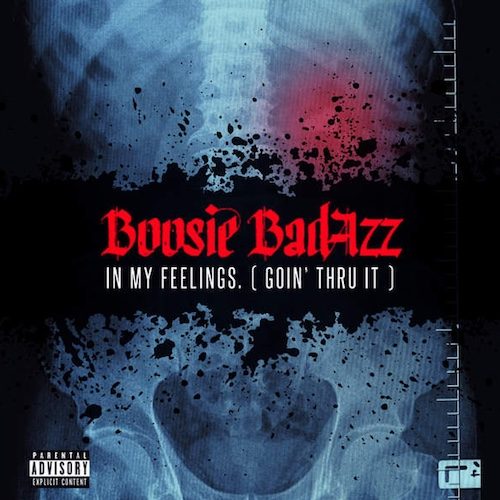 Boosie BadAzz :: In My Feelings (Goin’ Thru It)

Torrence Hatch can’t catch a break. The artist formerly known as Lil Boosie and currently known as Boosie BadAzz has had legal problems for most of his career. He’s been tried for drug possession, drug dealing, and murder, spending several years in prison. When he was finally released on probation in the spring of 2014, it seemed his luck had turned. Then he was diagnosed with kidney cancer this year, and had to undergo surgery to remove the cancer. “In My Feelings (Goin’ Thru It)” is a somber examination of the trials and tribulations of this Baton Rouge rapper. As he put in his Instragram post announcing the album:

“Last Christmas was the greatest. I was healthy n with family. This year I’m rehabbing from cancer surgery, me n a few people that’ it, no Christmas tree, my kids not even here, but I’m still here n ain’t going nowhere str8 up.”

I’ve never known Boosie to be a particularly deep lyricist, but he surprised me on this album. I was expecting the usual Southern street rap about cars, drugs, women, and partying. Boosie can do that, but there is also a more thoughtful side to him. For example, there is the obligatory women problems track “Stressing Me,” about a jealous girlfriend. However, where most rappers would make it a track about their girlfriend getting mad about all the women they have on the side, Boosie is rapping about how much it hurts him that the love of his life doesn’t trust that he is faithful:

“And I don’t know what to do sometimes
Loving you will make me lose my mind
You went to really tripping, your stomach got bigger
Now you think the baby is going to stop me from being a hundred with you
We can make it is what I truly believe
And I want you to change, but I don’t want you to leave
And I feel all alone when you ain’t next to me”

“Cancer” is about his struggles with the disease, as well as all the relatives he has lost to it.

“I’ve been stressing so bad, my nigga
Praying to the man with both hands, my nigga
Just want to be around in my family chilling
Lost three aunties to this pussy ass disease
while you keep beef with my family, nigga
Leave us alone, my God, we need some answers
Leukemia at 10 years old, please heal this cancer
My aunty Keisha just left, it’s real with cancer
Stress ain’t do it to her, ma, she was killed with cancer”

He closes that bar asking, “How long can I live with my kidney gone?”

The album deals with some somber topics, and the beats match that mood. It’s mostly stripped down synths, snares, and hi-hats. “Cancer” and “Stressing Me” almost sound like Bay Area rap circa 2000. The rest has the feel of Southern trap music, but much more subdued. There is only one song, “Roller Coaster Ride “, that can be described as upbeat. The rest of them are downtempo. The album ends with Boosie singing mournfully on “I Know They Gone Miss Me,” with straddles the line between being heartfelt and maudlin.

Nothing on the album hits anywhere near as hard as “Mr. Miyagi.” From that perspective, “In My Feelings” is a bit of a disappointment. The upside is that, given how prolific Boosie is, he’s bound to release three more albums in 2016 so fans won’t have long to wait for another Boosie banger. I personally appreciated Boosie going out on a limb and dealing with some real life issues. Ultimately, the strength of “In My Feelings” is Boosie’s honesty, and the way he applies his sharp tongue to dealing with illness and mortality.

Boosie BadAzz :: In My Feelings (Goin' Thru It)
7Overall Score
Music6.5
Lyrics7.5