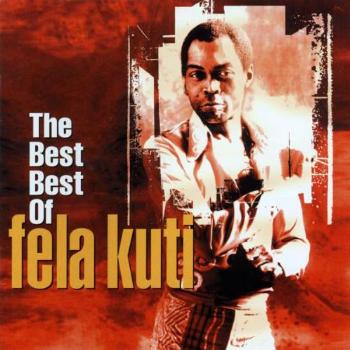 The Best Best of Fela Kuti

Fela Kuti was born in 1938, when his home country of Nigeria was still under colonial rule. He studied music in the UK at University, and returned home to play jazz and high-life in his newly-liberated country. He spent some time in Los Angeles in 1969, where he met some Black Panthers and was introduced to the ideas of Malcom X, Eldridge Cleaver, and other African-American activists. He connected their writings to the writings of Kwame Nkrumah and other Pan Africanist, and saw the similiarities in the Black experience around the globe.

This international focus is clear in his music. Fela Kuti didn’t play Nigerian music; he played something that incorporated elements of music from all of the places he’d been, and ended up with Afro-beat, a combination of African music, funk, rock, and jazz. There is a little James Brown, a little Herbie Hancock, and a little Sly Stone in Fela Kuti. He sang in pidgin English so that people outside of Nigeria could understand his lyrics, and the band was met with great success, despite the fact that they would almost never play a song again once they had recorded it, and one song could take up the entire side of an album.

“The Best Best of Fela Kuti” opens up with the squalling saxiphone of “Lady”. There is a long keyboard solo, under which the drums, bass, and guitar percolate in a relentless rhythm. Like all of Fela Kuti’s songs, “Lady” is long, clocking in at over 13 minutes. It’s not until the six minute mark that Fela’s vocals come in, making fun of African women who embrace Western ideals of feminitity. Like a lot of his music, “Lady” is concerned with Africans who adopt Western ideals and manners. “Gentleman” takes on African men who adopt Western dress. “I don’t be gentleman at all!” Fela proudly asserts. “I be African man, original. You say you’re gentleman/you go hungry/you suffer….me, I don’t be gentleman like that.”

Fela’s music has a wonderful way of combining a powerful message with uplifting music. “Shakara,” for example, criticizes braggers, but also has an infectious funky guitar riff. People might come for the message, but they’d stay for the music. These weren’t boring protest songs, they were a celebration. The government of Nigeria recognized the power of Fela’s message, to the extent that they raided and burned down Fela’s estate in 1977. This was partially in reaction to the song “Zombie,” which was critical of the Nigerian soldiers. The fact that Fela had declared his compound the independent Kalakuta Republic didn’t help matters, nor did an incident when some of Fela’s bodyguards beat up two soldiers and burnt their motorcycle. Fela wasn’t just preaching revolution on stage; he was practicing what he preached, and suffered the consequences of it. Thirty-two years later, “Zombie” remains a powerful song, and it’s not hard to believe that it incited riots.

Fela’s music wasn’t all fire and revolution, however. Tracks like “Sorrow, Tears, and Blood,” a touching eulogy to those killed an injured in the army raid on his estate, and “Water” are beautiful testaments to Fela’s gentler side. “Water” appeared on the 1975 album “Expensive Shit,” so named after an army plot to convict Fela of possesion of marijuana by planting a joint on him. Fela ate the joint, and then was brought into police custody while they waited for him to pass the joint, thus proving him guilty of possession. Fela managed to smuggle his feces out of jail, making it some very expensive shit.

The attacks on the Kalakuta Republic (which resulted in the death of Fela’s mother) didn’t dampen Fela’s spirit. If anything, it made him even more fiery and pissed off. Some of the playfullness of his earlier material is missing in his output on the second disc of this two-disc greatest hits set. Instead, there is a palpable sense of anger and injustice, calling out the Christian and Muslim clergy on “Shuffering and Shmiling,” and criticizing the army and government on “Army Arrangment.” On “Coffin for Head of State” Fela sounds world-weary at first, before getting his wind back, calling out corruption by declaring “Waka waka waka/I go many places/I go business places/I see see see/all the bad things they do.” The album ends with “ODOO,” a criticism of military governments. The chorus of the song, “soldiers come/soldier go,” became a rallying cry at street protests against Nigerian president Olesugun Obasanjo. These protests took place in 1998, a year after Fela died of AIDS-related illness, proving the power of his music. (It is a sad irony that Fela died of a disease he didn’t believe existed).

Fela’s political beliefs make his music all the more powerful, but you don’t have to know his biography to get into “The Best Best.” Even without the riots, the army assaults, the Pan Africanism, the attacks on colonialism and organized religion, Fela’s music alone is a force. It is funky, energized, and sounds enough like Western music to be familiar while still maintaining a thrilling uniqueness. It’s no wonder that he has become a hero of both the white hipster crowd and hip hop heads like Chief Xcel, who remixed Fela on 2004’s “The Underground Spiritual Game.” There is a lot going on in his music, and it can be appreciated on a theoretical level and a political level. Most importantly, Fela Kuti’s music can be appreciated on a gut level, because once the relentless beat hits you, you won’t be able to sit still. “The Best Best of Fela Kuti” is an essential album, and a great introduction to one of the more important artists of the 20th century.