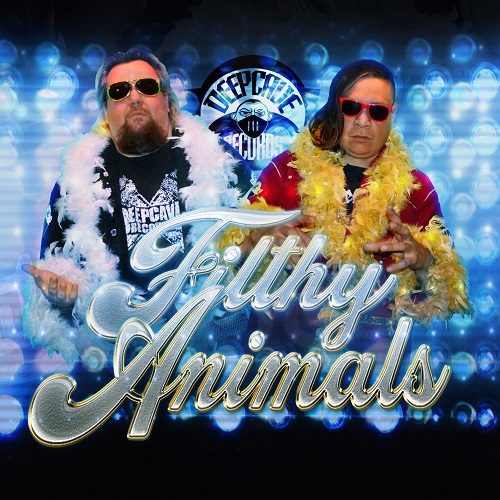 Search for “Filthy Animals” online and the first hit you’ll get is a pro wrestling stable from the now defunct World Championship Wrestling. If you add the keyword “rap” you’ll eventually get directed to the hip-hop group from Winnipeg, Manitoba, Canada. The press release indicates that “Still Filthy” is their third album but this is the first one I can recall listening to. Given how ambitious Hand’Solo Records is I have to believe they’ve been on a compilation album I previously reviewed since their career dates back to 2007… but with all apologies to Big Bear and Pnutty Goldust I just don’t remember it. They certainly got my attention with the opener “Purple Rain” though by chopping up and rearranging Migos’ hit “Bad and Boujee.” It’s amusing if not a little bit weird to hear rough Canadian emcees flowing on this syrupy Southern track.

Dissecting who did what on this album is remarkably easy — all tracks except for “Rambler” were produced by Pnut himself, and all lyrics are written by Pnut and Bear except for the guest stars. That’s a welcome change of pace given most albums I review these days feature a dozen different producers and writers. Examining the liner notes also gives me a twinge of remorse for saying I don’t know or remember the non-WCW version of Filthy Animals. The author (I’m presuming it’s Pnut) talks about the “roller coaster losing key people from death and Bear’s personal health issues.” Damn. I’m glad they were able to pull it all together and release unapologetic rap songs like “Not Sorry” — which humorously enough follows the song “Sorry.”

The longer I listen to their release the more apparent it becomes that they enjoy sending up modern hip-hop with their own twist. Just as “Purple Rain” rearranged “Bad and Boujee” in a cleverly funny way, “Filthy Gang” is a send-up of “Gucci Gang” which also shows that the pro wrestling group name is not a coincidence when you hear the line “reach down my sweats and I pull out Mr. Socko.” You’re never going to insult me by working the squared circle into a song but people who don’t follow Mick Foley will probably have to Google that one too. “Rambler” continues the trend with references to being a “venom injector” and “my clique is the nWo b—h.”

For better or worse I get a little bit of an Insane Clown Posse vibe from the album and not just because of the wrestling references. Songs like “Freddy on the Block” try to dip straight into the same vein of dark and psychopathic raps that ICP has always floated in and out of. The coincidences don’t end there — both groups have a penchant for saying comically absurd and gross things to get your attention, both are composed of a part of white boys (that’s not a bad thing it just is what it is) and both have a devoted cult following, although by the press release’s own admission Filthy Animals’ is “Western and Central Canada” as opposed to a worldwide posse of Juggalos.

It would be an exaggeration to say I either “love” or “hate” the Filthy Animals. Pnutty is a competent producer, both members of the group know how to stay on beat while flowing, and although I know even less about their guest stars (40, Lev, Bang Em and Kode to name a few) than the group none of them ruin a song by their appearance. Unfortunately none of these songs pull me in and make me want to listen more than twice other than the opener and closer — “Purple Rain” and “Freddy on the Block” respectively. That results in a 40 minute album that’s just average on the whole with very little that stands out or demands further inspection. I can’t say it’s a throwaway album, but I can picture most people buying songs a la carte instead of the full CD.