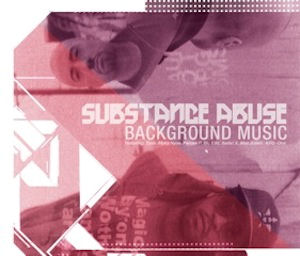 Last week I denoted certain difficulties while reviewing the Liotta album I had been sent in the mail – chiefly in the area of Google searching for anything about him without getting sidetracked by unproductive “Goodfellas” references. In hindsight that was a cakewalk compared to looking up Substance Abuse. Even if you add keywords like “rap group” you get endless editorials decrying the abundant abuse of both legal and illegal drugs in popular music. Were it not for the helpful publicist who sent me both the “Background Music” CD, a digital copy and a link to their bio online, I would have been almost completely up a creek without paddles or even a boat. Thankfully they’ve also got a few videos on YouTube – “What It Takes” and “West Los” – and to make it easier on us all I’ve included both below so your search results will be more cohesive.

Neither of these songs feature any guest appearances, but for Eso Tre and Subz that’s almost the exception rather than the rule. The number of known and big name artists on “Background Music” is to say the least impressive – Tash from Tha Liks is on “Don’t Get Us Wrong,” KRS-One blesses “Rear View,” Sadat X can be found on “Three Sheets to the Wind” and even veteran Compton rap legend MC Eiht shows up on “Flossin’.” The group isn’t shy about sharing the wealth though with lesser-knowns, as you can find Mawnstr on “Crew vs. Gangs,” Hanif Hobbs on “Young Hollywood” and Waes One on the album’s title track just to name a few. “Goon Hand” is a solo track that represents their vibe well.

“Draw circles ’round your want ad, interview in a wifebeater
Convince you I’m a high achiever, huntin the tightest beaver
without a Nike sneaker, why don’t you be a quiet keeper?
I mean keep it quiet
Cause you know there’s nothin sweet in my diet
Peep the diabetic, dyanetic psychedelic”

While they have the flavor and feel of a left coast progressive rap group, they don’t push experimentalism at the expense of substance (no pun intended). “Flossin'” is actually a carefully measured study of whether or not the materialistic values expressed in so many rap songs are appropriate any more, while “Rear View” is a chance for all involved to both appreciate the old school while recognizing we can’t go back and live in that era any more – time has marched on. Substance Abuse are elemental in their hip-hop approach, having come from an era when graffiti was an art, and now tags can be viewed as a threat – a topic addressed on “Crews vs. Gangs.” To make a long story short, the one thing you can hold true about this group and this CD is that they are NOT abusing the substance of hip-hop – this is an hour of well produced music with a meaning and a purpose you won’t find hard to enjoy.