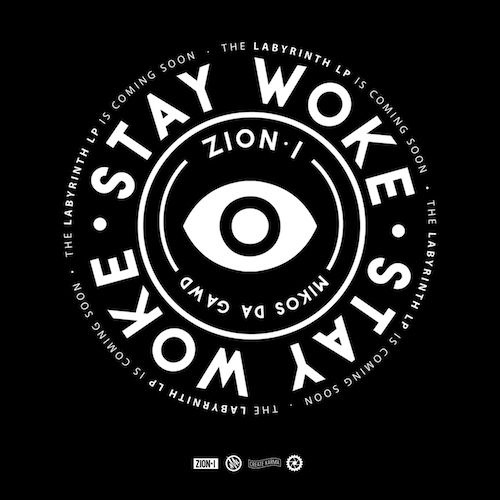 Trying to correctly explain Zion I’s status in 2016 shouldn’t involve a half dozen rewrites in my head and a half dozen more in print but here we are. Last I knew Zumbi and Amp Live had split up (amicably) and moved on to their own projects. I can’t say that wasn’t a disappointment given they made some of my favorite albums, but it was clear their as their output dropped and their side projects mounted up that enthusiasm for collaboration was waning and that moving on might just be for the best. Still it doesn’t seem that their Wikipedia page has caught up on their break up, insisting their status is “1996-present.” Okay then.

As if that wasn’t unclear enough, it appears that Zumbi has retained the rights to the Zion I name and intends to continue releasing albums under that moniker going forward. If you own a concert venue and want to put on a show you might book Zion I before Baba Zumbi so I can respect his decision, much like I’ve come to expect wrestlers released from WWE to continue using their names on the independent circuit (unless WWE’s legal beagles insist otherwise). The problem is that the waters get even murkier when you use the name as an imprint to present another artist If you’re expecting an album produced by Amp Live because it’s called “Zion I” then I have to say you might as well check out here. It would have been better if they called this “Zion I Presents Mikos Da Gawd on Production.” After all other artists “present” someone new on the regular. Given how poignant and powerful “Tech $” is though I’m willing to let all that slide.

The gentrification of Oakland is a real and ongoing problem that doesn’t get much press compared to the 24 hours a day coverage of what a buffoon Donald Trump is, but Zumbi puts a literal face on the issue as he and his family are evicted from a home his landlord wants to flip they can no longer afford to live in. “Motherf#$@#r can’t even afford to pay rent — too expensive out this b#$!h. Where’d the culture go? They bringing in corporate culture. What happened to the people?” All good questions which beg more than just glib answers, but it’s the same sad song I’ve heard from many friends in Cali who moved elsewhere.

Getting back to the confusion issue though, some sources list “Stay Woke” as a mixtape, while others list it as an album. What’s even more confusing is that there’s a new Zion I album called “The Labyrinth” due out next month. Now is that another “Zumbi uses the name Zion I as he chooses” album, or is that an actual reunion of Zumbi and Amp Live? While I try to sort out those issues in my head I’m listening to “Stay Woke” and have a generally mixed feeling about it. For every quality song like “Tech $” there’s another like “She Love Me” that’s completely forgettable that feels completely phoned in.

At only 35 minutes long it’s actually a lot shorter than most of what gets called or distributed as a “mixtape” these days. I think ultimately (and a bit regrettably) I have to take this album as not being something I’d really call a Zion I album. There are certainly some quality moments on here like “Sriracha” featuring Deuce Eclipse and in particular “Only That Real” featuring Raashan Ahmad, but I’d expect a full CD of that from Zion I and this isn’t it.