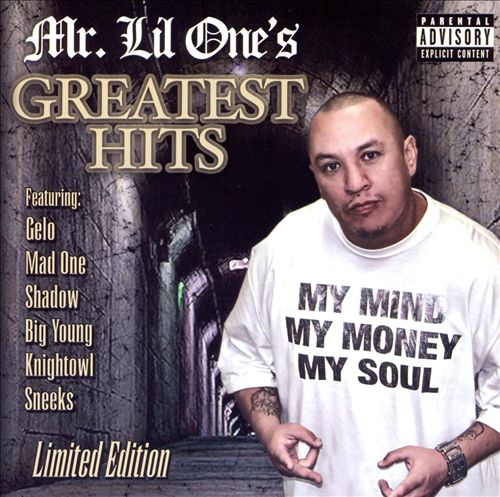 Often we incredulously remark on how prolific rapper X is despite receiving little mainstream attention. I know I still remain in disbelief that rappers like Messy Marv, Mac Dre, and K-Rino remain underground despite their long careers. I now am able to put those feelings in perspective. While Messy Marv, Mac Dre, and K-Rino at least develop some hype on the underground, rappers like Mr. Lil One get overlooked and ignored completely outside of hardcore Chicano rap fans. If this was his first album I might find it understandable, but Mr. Lil One is one of many Chicano rappers who is more than 20 albums deep in the game. In 2002 Mr. Lil One even out-hustled K-Rino, releasing 5 albums that year. With that much material, his “Greatest Hits” should have no shortage of worthy material. While other Chicano rappers choose a niche to focus on, Mr. Lil One’s forte is variety.

The collection kicks off with “Mr. Lil One” where the man is in full stereotypical Chicano mode. By that I mean he flips an oldie for the beat and hook. He switches things up a little by avoiding the usual summertime or love jam and talking a little trash on the track. While I still don’t understand Chicano rap’s obsession with oldies, I have to say it’s a nice little track. “I Don’t Know” finds a Kokane impersonator handling the hook while Mr. Lil One talks about his San Diego lifestyle. On “The Streets” Mr. Lil One once again big ups the streets and flips things yet again with a soul sample on the track. It’s an enjoyable tribute to the streets. “Who Be The Bad Mothafucka” is another style clash as Mr. Lil One comes at us with a Cypress Hill/Funkdoobie style, funky beat and all. By the time “La Puerta Negra” rolls around you are not as shocked as you should be to hear Mr. Lil One rap in Spanish over the instrumental from the Eurythmics’ “Sweet Dreams.” You read that correctly, and Mr. Lil One’s Spanish flow isn’t bad at all either. Mr. Lil One’s strong point is his ability to adapt and he shows it well on his greatest hits. While he covers a lot of the Chicano rap clichÃ©s, he also comes out of left field on a few of the tracks. The highlight for me is the fact that Mr. Lil One even ventures into the horrorcore arena on a few of the tracks, the highlight being the Mr. Shadow assisted “Highway 666:”

If that isn’t some horrorcore then I don’t know what is! It is also a contrast to Mr. Lil One’s more laid back side on “Stay With Me” where he pleads:

Now the hoes getting righteous, baby don’t like this
Move it like that, yeah I like this
What about foreplay? Beat it up all day
Will I still love you in the morning? Always
Show you what I mean every time that I speak this
You know what I mean girl, you know how I treat this”

Without Mr. Lil One’s melodic flow most of his lyrics would sound quite typical, but they work with most of his songs. His ability to flow in and out of different styles also takes the attention away from the simple lyrics. Still, even with his shortcomings Mr. Lil One shows us why he’s been around for so long on his collection.

If variety is your poison of choice, Mr. Lil One is the man for you. Turns out those Kokane-esque vocals come from the man as well, so his melodic flow also lends itself to singing. Mr. Lil One is sort of the Nelly of Chicano rap in that sense. He has a sing-song flow and adapts to what works. He makes some damn catchy music, which I assume has helped him stretch his career out as long as he has. If you can get over the simple lyrics, you’ll find plenty of enjoyable tracks. Even if the lyrics are your thing, I have to say the variety, beats, and hooks still keep this interesting.