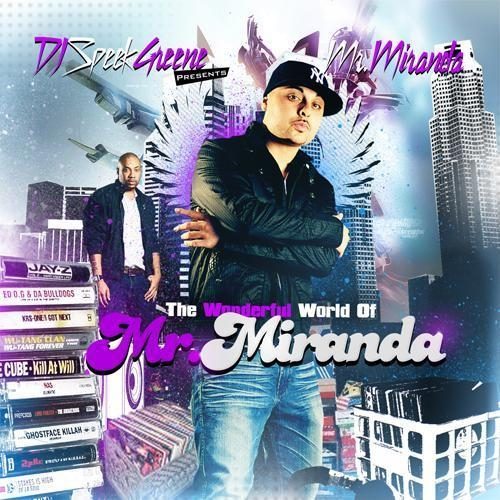 There’s a lot I can tell you about Mr. Miranda and DJ Speek Greene, and a lot that I can’t. Here’s what I am sure of – Miranda is the nephew of Ernesto Miranda, the same man who the “Miranda warning” all cops give during an arrest is named after. (“You have the right to remain silent. Anything you say can and will be used against you in a court of law.” Et cetera.) At various times in his rap career he went by the names 40 Oz, D-Latin, D-Smooth and just plain Smooth, but in his own words he says he’d rather be proud of the man he is today and his family’s heritage. I can dig that. Speek Greene’s bio is much harder to find, and to make matters more confusing there may be two different men by the same name – one in Arizona and one in New York. One of the two (or perhaps even both if they are the same man) was the DJ for Jaz-O, who you may also know as Jaz, the man who first put Jay-Z on. It would have been nice if the artists involved had sent me a one sheet to go along with this self-produced mixtape but that’s neither here nor there at this point. All I can tell you is I’ve got an album of 17 tracks (16 listed and 1 bonus) and that if you’re interested at the end of this review go to Miranda’s MySpace page to hopefully find out how to get a copy (though I didn’t see any obvious purchase links).

The “Intro” to “The Wonderful World of Mr. Miranda” sounds like someone reading from a Wikipedia entry on the life and times of Ernesto Miranda. Since you can read it yourself on the web, skip it. On the second track Miranda proudly states himself to be from Phoenix, Arizona and tells you what his life is like “In the City.”

“With they mindstates, some are in the penitentiary
Wishin they could go back and be in the detention see
‘stead of in a caged cell, livin in a grayish hell
Seems like, all the goals they made in life failed
Now they’re tryin to get it goin, and get up on the right track
Been pushed down so now they’re tryin to fight back
Tough is how they might act; aiyyo it’s rough in the city
sometimes homey so I had to write that”

That’s a promising start for Mr. Miranda lyrically, although the backdrop beat is either borrowed from or produced like a generic East coast mixtape freestyle. There’s no question about “Remind Me” though, because the beat is the EXACT same Patrice Rushen track that Junior M.A.F.I.A. (among countless others) used on “I Need You Tonight.” If you’re going to jack, you might as well jack something dope. Again Miranda’s rap rises above the background sound and plays the starring role as a down-to-earth dude trying to impress a girl by pointing out he’s NOT acting too flashy around here. That’s a refreshing twist. As the mixtape moves on to “Move Fast” I’m picking up on Miranda’s style, which is a speedier rap than many of his contemporaries, although we’re not talking Twista level fast. Still he’s very nimble with the tongue and has good diction to his flow, which just goes to show all those years of different rap names were just developing his rap ability to where it stands now. This may seem an odd description at first, but vocally I’d describe him as a mixture of Slug, Big Pun and Will Smith. I’ll break that down to make it clear – he’s got that little bit of hispanic bite to his vocals, he’s got a little bit of smooth player charm to his rap, but on songs like “Better Plan” he showcases a writing style that can cross over from underground to gain mainstream fans. He’s also old school enough to reference Dres from Black Skeep in the opening of “We Getz Down” by noting he’s “fresh on the scene, crispy and clean” – and that definitely won me over.

Miranda seems to be decently connected for an up-and-coming artist, having Random guest for the track “On Hiatus” and Mista Mista guest for the track “Ain’t No Love.” The latter has the two rapping over Morris Day & The Time’s “Cool,” which is both the strength and weakness of “The Wonderful World of Mr. Miranda.” As much as I enjoy Miranda’s rap style and the songs on it, I really can’t judge the beats since almost none of the music seems to be original or mixed in a completely original way. Credit goes to Speek Greene for “presenting” Mr. Miranda by using choice cuts, but I would much rather hear what Miranda can do on a full album of wholly original material. Since he’s already linked up with Random getting good production shouldn’t be that much of a problem. Mr. Miranda is a promising rap artist who has clearly been “up and coming” for a while now and will no doubt continue his come-up in 2009.