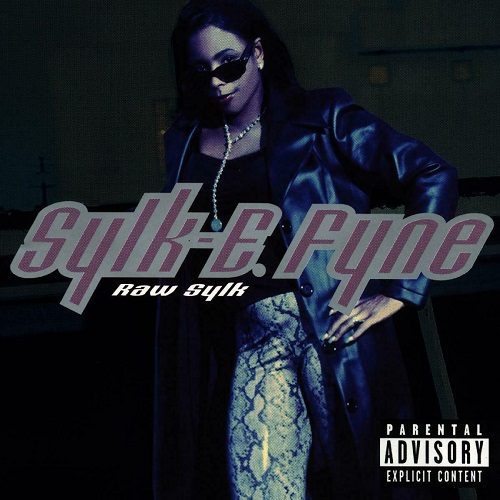 She’s rapped alongside 2Pac, Snoop Dogg, Eazy-E, Too $hort, E-40, Ras Kass, Suga Free, Bad Azz, Dru Down, Spice 1 and other West Coast luminaries. She had a single in the Billboard top ten. But with how many rap fans does the name Sylk-E. Fyne (spelling varies) actually ring a bell? Her latest random appearances were on Too $hort’s “No Trespassing” album, back to back on “Boss” and “Hey,” singing on both tracks and rapping on the former.

Legend has it that Sylk-E. Fyne was part of a girl rap group named G.B.M. Eazy-E signed to Ruthless Records in the mid-1990s. While there were no official releases, a couple of bootlegged songs have surfaced over the years. In 1998, however, a notable cameo on her mentor’s “Str8 Off Tha Streetz of Muthaphukkin Compton” already three years behind her and having graduated from college and given birth to a son, homegirl went solo on that ass. She did so with the help of original West Side Crip turned community activist Michael Concepcion, responsible for 1990’s “We’re All in the Same Gang” project.

Production was handled in-house by the duo of Gerald ‘Big Yam’ Baillergeau and Victor ‘Vino’ Merritt, who therefore also have a gold plaque hanging on the wall for “Romeo and Juliet.” Like other ’90s rap hits, “Romeo and Juliet” samples from an ’80s R&B hit, in this case RenÃ© & Angela’s “You Don’t Have To Cry.” In terms of its slower tempo, it’s very much in tune with the West Coast sound of the mid-to-late ’90s. Since Sylk is from South Central and her guest Tha Chill is from Compton (he used to be in fact in a group called Comptons Most Wanted), one might expect some Shakespearean set-up where lovers find each other across enemy turfs or something like that. That is not the case. Chill only performs the hook, and his “It’s like Romeo and Juliet…” analogy strictly refers to the depth of the love described. Sylk herself makes no reference to art’s most famous lovers and instead mentions that all-American crime couple Bonnie and Clyde. Musically inspired by Warren G and Nate Dogg’s “Regulate” and conceptually by the Jay-Z/Foxy Brown duets, “Romeo and Juliet” is a typical second-row pop rap hit that owes about 50% of the attention it got to its title. Still Sylk stays true to the love theme, rapping, “When you find good love, you best to keep it / I’m puttin’ all my sisters up on game, so won’t you peep it.”

One track later RenÃ© Moore and Angela Winbush are sampled again. It’s a loop rap listeners had heard a year before on “I’ll Be” by Foxy Brown and Jay-Z. “Grand Jury (Coming Through)” attempts to establish the Grand Jury brand, while Sylk envisions herself as “the First Miss on the West / with the platinum status, takin’ trips in high-class jets.” “Raw Sylk” is a testimony to the fact that in 1998 Lil’ Kim and Foxy Brown were the femcees to beat. Boasting “I’m iller than the Na Na” over a sample the Ill Na Na already put her stamp on is poor judgment. But otherwise Sylk-E. gives a convincing rendition of the ‘Beautiful But Deadly’ act. On “Material Girl” she jacks brothers for their possessions – not golddigger style, but rather how they (used to) do it in South Central L.A. So instead of sampling Madonna, she borrows some Zapp bounce to give her tale that particular West Coast flavor:

“As I rolls with my spliff
Pager blowin’ up, I check the code and it’s this trick
I met him off the ‘Shaw playin’ boss with his friends
The fool ain’t my type but I can tell he got some ends
As I hit the corner I drop the top – ‘What’s poppin’?’
He say, ‘What’s up for the night? Got some friends for my partners?’
‘Fa sho, how about you meet me after fo’?’
We know the sisters gonna get him for his dough
On the low I play him like it’s all good
but after tonight he’s gonna wish he never would
‘ve been a hound on the loose, out to seduce
but instead him and partners gettin’ juiced”

The story unfolds over four verses and ends with half-naked, handcuffed gentlemen while the girls “celebrate with they stuff.” As far as female gangster rap goes, “Material Girl” is actually one of the more convincing songs. Interestingly enough, this material girl opposes overly materialistic rap lyrics, for instance on “Lost in the Game,” where she also questions “the image we portray as rappers as hoochies, hustlers, gangster, ghetto-rich bastards,” adding, “There has to be a way to keep the stuff real.” She’s looking to “Keep it Real” on the very first song, but still has to state that “It’s about money and fame” in the self-sung hook. “Keep it Real” pledges allegiance to the streets and even threatens “females with fame” to strip them of “all yo loot, yo Versace suit, yo 300 L-e-x-u-s Coupe,” but the accompanying video copied very much Bad Boy’s visual formula.

The ‘Keep it Real’ slogan turns up again in “They’ll Never Be,” another pastiche of self-aggrandizement and what she describes as “reality-checkin’ hoes.” Rappers not named Mos Def or Talib Kweli didn’t think all that much about concepts like ‘community’ in 1998, but Sylk-E. Fyne proves that she does care. Arguing from personal experience, she puts America’s legal system on blast on “I Ain’t Down With the System” and remembers her grandmother and Eazy-E on “I Miss My Loved Ones.” On “Love No More (Look Into My Eyes)” she’s a woman who comes to the conclusion she has to end an abusive relationship and who is able to give advice to others by the end of the song:

“Too many women is dealin’ with abuse
always makin’ an excuse, so what’s the use?
Especially if you got a baby involved
Unsolved mysteries, check yo man history
Before you settle down be sure you’re safe
Keep God in your life and keep the faith
But if he beats you down, sister, you’re best to break
and take your life more serious, cause furious
ways’ll send you to your grave
It ain’t worth bein’ stressed or unhappy
cause a child is better off without a deadbeat daddy”

There isn’t an immediate comparison that can be drawn to her female contemporaries. Not to Kim, not to Foxy, not to Rage, not to Bo$$. Sylk-E. Fyne labels herself everything from “bad-ass mama” to “female Makaveli,” but across the rap posturing and her different roles the real person regularly shines through. The person who made a conscious effort to keep her lyrics relatively clean. The woman who decided to leave room for personal moments in those lyrics. Sarcastic folk might pick out a double entendre in the lines “I don’t sleep around because it’s sleazy / Good lesson taught by my big homie Eazy,” but Sylk is a straightforward rapper who tries to be as serious as possible. She isn’t blessed with abundant talent, but she has a clear and dominant delivery, uses her femininity wisely and emerges as a multi-faceted artist on her debut. Even though the opening duet with Too $hort, “Keep it Real,” stands as the album’s tigthest track, the music and message of “Love No More (Look Into My Eyes),” “I Ain’t Down With the System,” “Lost in the Game” and “They’ll Never Be” are absolutely noteworthy.