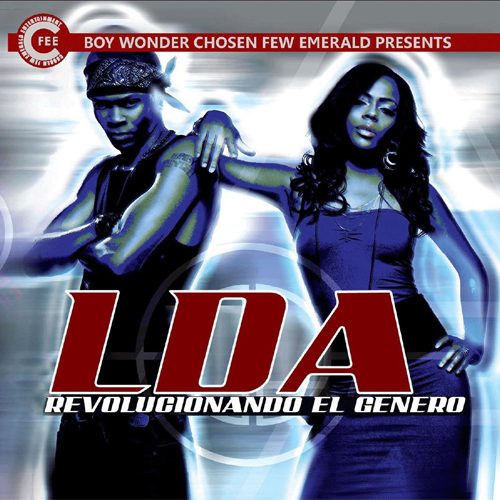 Reggaeton is a silent stalwart in the music industry. At first glance the genre is no longer the hot item it was a few summers ago when even Noreaga was planning on releasing a reggaeton album. Despite moving out of the limelight the last few years, the genre still is a relatively strong seller among the Hispanic youth. For this reason, labels have continued to push the genre in hopes of tapping into the plentiful market. Boy Wonder is a reggaeton producer who gained popularity with his compilation “Chosen Few El Documental” and is now pushing his own label. The first act is LDA, a male female duo of Dominican descent that hails from New York City. The duo is comprised of Baby Psycho and Orquedea Negra. Psycho supplies melodic rap verses, while Negra balances that out with singing. The production is handled by the aforementioned Boy Wonder.

LDA’s theme and album title is “Revolucionando El Genero” which translates to “revolutionizing the genre” in English. LDA tries its best to truly bring something fresh to the table with their album. The production is not your typical reggaeton production. By that I mean you won’t hear an up tempo mix of synths and double time snares on every track. Boy Wonder mixes things up and taps into the deep culture of Latin American music providing LDA with bachata and merengue inspired music. The typical reggaeton anthems are here as well, but the variety gives the CD a nice feel. There are even a few tracks that would be straight hip-hop beats such “Por Ti.”

As lyricists and song writers, Psycho and Negra rely far too much on their gimmick to set them apart. They claim to be the first male/female duo in reggaeton and while it may be true it is not enough. Far too often they fall into the same stereotypical and tired themes we’ve come to expect from reggaeton artists. Most of the songs consist of Negra singing a hook dealing with relationships while Psycho drops a few love related verses. Granted, reggaeton has never claimed to be more than party music, but LDA is far from revolutionizing the genre on this CD. Negra is a decent vocalist, but no Lauryn Hill. Psycho has an animated flow but lyrically is not that deep. Psycho’s melodic delivery and ability to sing adds a nice change of pace, but overall the duo’s topic matter fails to differentiate them from other reggaeton artists.

Overall “Revolucionando El Genero” is an average reggaeton album with some interesting elements. The male/female combination and emcee/singer mixture adds something to the album, but at the same time reggaeton artists are already known to utilize singers heavily in their work. The production is ambitious for a reggaeton CD, but ultimately the bulk tends to be generic reggaeton and hip-hop production. The duo shines best when they venture away from those genres and tackle the more traditional style of Bachata on “Miro La Luna” and Merengue on “Vente Conmigo.” Their updated vocal styles add something fresh to those traditional genres. Those songs, along with a few others, would be definitely recommended for fans of Latin American music, but overall the CD falls short of its lofty claims.