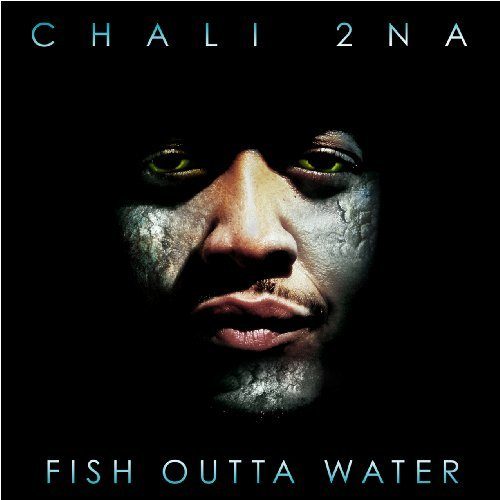 Chali 2na’s much-delayed solo debut “Fish Outta Water” was originally finished in 2005. Think of how much has changed since 2005: we have a new president, the economy has gone into the toilet, and, oh yeah, Chali’s band, Jurassic 5, broke up. Those changes were part of the reason for the delay, as Chali wanted to go back and update the sound and lyrics of the album to better fit the changing times. With new songs and a a new label (Decon rather than Interscope), “Fish Outta Water” is finally ready for its close up.

The title suggests that Chali is getting out of his element, and the music backs this up. I generally associate Chali with feel-good, old-school beats and rhymes. While that sound is represented here, there is also a more aggressive tone to some of the songs on the album. This is combined with production by Jake One, Scott Storch, and Vitamin D that is more club than backyard barbeque. This shift is also signaled by Chali’s geographic references. There’s a lot of talk of his home town of Chicago, and very little mention of Los Angeles, where he met Cut Chemist and formed Jurassic 5. It’s as if he is abandoning the sun and fun of the West Coast for the grittier, tougher life in the Windy City, both musically and lyrically.

The album starts off with the horns and bouncing funk of “Get Focused,” which bleeds into “International.” At this point Chali steers away from the golden age sound J5 favored, going in a more blippy, clubby direction, with Beenie Man offering his toasting abilities. “So Crazy” goes even further in this direction, with a minimalist electronic beat, and Chali rapping about how the stresses and pressures of life can drive you crazy. “Try to never let the pressure defeat you/Losing your mental faculties ultimately defeats you,” he advises. “Some of us can make this seem seamless, but then again insanity can really mean genius.” “Lock Shit Down” rides a sinister guitar riff while Talib Kweli and Chali trade licks. If the Black Star reunion doesn’t work out, Talib and Chali should consider doing an album together; their contrasting flows compliment each other, and there is a natural chemistry between them. “Controlled Coincidence” starts off with Ronald Reagan’s infamous quote that “Government is the problem,” before going into a fierce middle-eastern beat while Chali and Kanetic Source trade bars criticizing the government.

“Don’t Stop” returns to traditionalist territory, featuring a banging flute loop and Anthony Hamilton singing the hook while Chali urges listeners to not give up. “Keep Goin'” is a similar track, with a similar message, and a female R&B singer on the hook. It’s also one of the weaker songs on the album. The music is syrupy R&B, and Chali’s positivism comes off as preachy. He has better success fusing hip hop and R&B on “When Will I See You Again.” The track features verses by Elzhi, and smooth beat that reminded me of Q-Tip.

“Righteous Way” is one of two deeply personal tracks on the album. The song details his father’s struggles with drug abuse, his siblings’ strained relationship with their father, his own failed marriage, and the birth of his children. The album closer, “4 Be Be” touches on the death of a friend, the 2000 bus accident that left him with a metal plate in his head, and a concert fiasco where the police started macing the crowd when a fight broke out. These two tracks show a more sensitive, subdued side to Chali, in contrast to his generally positive and oversized persona.

In some ways, “Fish Outta Water” reminded me of a less commercial, less obnoxious version of the Black Eyed Peas. Like the Peas, Chali mixes in dance beats, reggae, and R&B to create a multi-hued version of hip hop. He sounds out of his comfort zone on some of the harder-edged tracks, and his upbeat baritone is better suited to the more old school songs. Still, while he may be reaching, he never tries to be something he’s not: this isn’t Chali’s version of “The Funky Headhunter.” “Fish Outta Water” is a bright, colorful album that does an excellent job of incorporating different styles into a cohesive whole. It’s the sound of a man trying out new sounds and new materials after years of being part of a group. Chali 2na finally has his moment in the spotlight, and he delivers the goods.