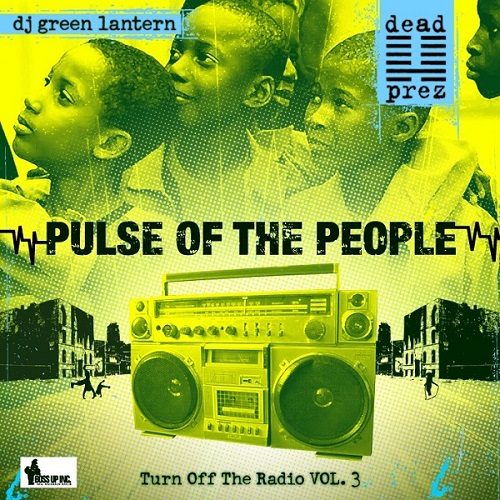 dead prez, the lower-case duo consisting of M-1 and stic.man, have been making their revolutionary but gangsta music since 2000’s “Let’s Get Free.” They combine radical leftist ideology, Malcom X’s “by any means necessary” mantra, and a healthy dose of street philosphy. dead prez speak truth to power, criticizing the U.S. government, capitalism, the NYPD, white people, and even Barack Obama. I’m an Obama fan, but it’s refreshing to hear people call him out for his shortcomings, and not treat him as if he were a Magical Black Man come to cure America of all it’s problems. Anyone afraid that dead prez would chill out now that we have a Black, democratic president don’t have to worry: they are pissed off as ever, and the current economic crisis is only adding fuel to their flames, and making their revolutionary rhetoric that much more appealing.

“Warpath” is a good example: it’s a fantasy about getting back at the police. “Murderer, terrororist, racist, supremacist,” they rap, “Terrorize the residents, intimidate the innocent.” At the end of the song, they get their revenge on the “redneck Lucifer”: “I ran up in the precinct and I shot the sheriff.” It’s a little “Fight the Power” and a little “Fuck Tha Police,” proving their claim that they are “somewhere between Public Enemy and N.W.A.” “NYPD” criticizes the New York police, New York itself, and the system in general. “Gangsta Gangsta” attemps to redefine a gangsta as someone who is a leader and protector of the people. It’s similar to 2Pac’s “Thug Life” philosophy, in that it tries to apply revolutionary ideology to street living. “Afrika Hot!” takes it back to the beginnings, tracing African-American’s back to their roots in the Motherland.

“$timulus Plan” criticizes how the corporations got bailed out while ordinary Americans suffered, and questions the capitalist system:

“They call it freedom
It’s a cold game
And it’s the same from the top of the food chain
All the way down to the little homie in the street gang slanging cocaine
That’s how they do things
It’s the American way
Imperialism – have it your way
Whatever it takes, whoever gets fucked in the process, that’s ok
That’s how they play
So you can’t blame us
Them dead white men on that paper ain’t us
So we still got to hustle for the benefits, man
My grind is my stimulus plan”

Anyone drowning in debt, suffering from layoffs, and/or underwater on their mortgage understands the concept of “whoever gets fucked in the process, that’s ok,” and it’s great to hear someone calling out the insanity of the current economic situation.

dead prez are unique in that they rap about real issues with the aggression and anger generally associated with more hardcore or street rap. They aren’t jazzy bohemians getting all Michael Franti on your ass. This isn’t music for hippies or coffeeshops. They sound like gangsta rappers who realized that they were better off rapping about killing the Man rather than killing each other. They fill a huge void in hip hop today for music for the streets that is about real issues, and promotes a positive message rather than the same old hedonism, materialism, and glorification of drug dealing and violence. Even more remarkable is the fact that dead prez do this without sounding preachy or corny.

While I was totally on board with their message, after listening to this album all weekend, I still wasn’t feeling it. The problem is Green Lantern’s production. At it’s heart, “Pulse of the People” sounds like a street rap record, and that’s a sound I’m not a huge fan of. It’s loud, it’s bombastic, it mixes in elements of rock, and it wasn’t rocking my world. “Runnin’ Wild” isn’t wild so much as it is cacaphonous; “Life Goes On” is cheesy alterna-rock; and “Don’t Hate My Grind” has wicked organs on the verses but a limp chorus, which repeats one of the most overworked phrases in hip hop. Bun B.’s presence almost redeems the song, even when he’s dropping dubious lines like “getting fucked like a pussy.” There are bright spots as well, like the mellow soulful “Summertime,” the intense drums of “Afrika Hot!,” and the Funkadelic sounds of “Warpath!” In general, though, the production is pretty average. Of course, this is coming from a guy who passed on “The Carter III,” and doesn’t understand why the Diplomats or Khaled are famous. It would probably defeat the purpose of being revolutionary but gangsta if dead prez went with Madlib or Flying Lotus for their beats, thus alienating the very people they are trying to communicate with. At the end the day, dead prez’s delivery makes “Pulse of the People” worth hearing. Hip hop would be a much better place if there were less people rapping about cars and clubs, and more people rapping about institutionalized racism and the prison-industrial complex.