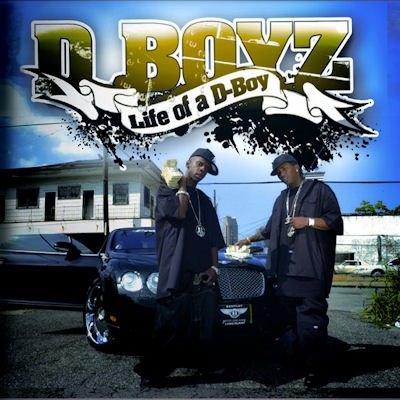 This is a REAL album? No no no I didn’t sign up for this. Here we go… oh dear. Is this really what passes for “music” nowadays? Forgive me for sounding like my Dad for a moment, but honestly. I could write a review for this claptrap in about fifty words and you would get the message to steer clear. I just don’t understand who on EARTH would buy such a nonsensical, dull and pointless album. I don’t think even the D-Boyz themselves would bother buying it. Or downloading it. Honestly. Production? Absolutely appalling: it sounds so amateurish and uninspired, tinny and childish (beep beep beep BEEP beep beep beep beep BEEP makes this more like decoding a Morse Code message). Lyrics? In fairness, the technical aspect of the D-Boyz lyricism isn’t that bad at all: they can string together words with occasional aplomb, their voices are solid and if their subject wasn’t so SINFULLY BORING then maybe it would have saved the “Life of a D-Boy.”

And what a ridiculous life they must lead. Drug dealing or making music, which should they choose? WHO THE FUCK CARES? How should they spend the $35m in their pocket? Which bitch to fuck, which ho to nut, which CLICHÃ‰ TO UTILISE â€“ AAARGH who authorised this shit? If this were buried in a time capsule, and music historians in a hundred years were to dig it up and try to pinpoint why hip hop LEFT THE EARTH then this album would provide Columbo 2109 with ALL the answers. A waste of time, money, resources, talent, paper and plastic. Hey man, I appreciate the “grind” and the “hustle” just as much as anyone, but their target market appears to be drug-dealers that like shit music. Is that really a demographic worth pursuing? Does selling ten copies of an album really fund the purchase, I’m sorry, rental of the Bentley that is on the cover of your LP? How could this possibly break even unless they attached a vial of cocaine to the CD case? This is 1.2 hours of my life â€“ albeit stretched into what felt like three days â€“ which I will never get back. What pisses me off is that the MC’s have talent and a way with words, but they are so narrow-minded as to look at the hip hop scene and think that this is actually what people like. Even if they sell 50,000 copies of this, I don’t care â€“ that means that 50,000 people got duped. So, in conclusion, The “Life Of A D-Boy” is the audio equivalent of getting swine flu.