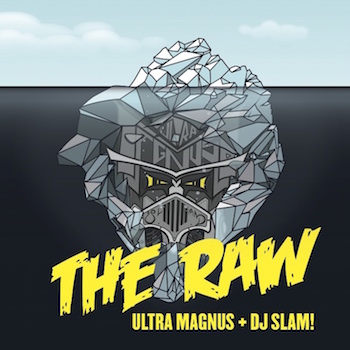 Within the first two minutes of listening to “The Raw,” rapper Ultra Magnus is giving me flashbacks to early 1990’s Jay-Z, the fast tongue flipping Jay-Z, and to follow up that DJ SLAM! starts sampling from and scratching Transformers dialogue fromScourge. Of course that was to be expected since Ultra Magnus is himself a reference to the robots in disguise, but still I had a good vibe that I was going to enjoy the flavors “The Raw” had to offer.

The press release for “The Raw” was modest and self-deprecating by hip-hop’s braggadocious standards, noting that they are only the latest DJ and “the 10,000th rapper this week (and from Canada no less).” That’s one of the refreshing things about the Canadian rap scene though – it seems to be more permissive to have a sense of humor about your importance to the genre. In an era where even your run-of-the-mill GarageBand produced Bandcamp rap artist has to act like they’re the greatest thing since poutine, out of some misplaced idea of self-preservation that you’ll be eaten alive for not acting super cocky, it’s nice to see this duo and many other North-of-the-border rappers are able to dial the bravado down a notch.

Speaking of North-of-the-border, Ultra Magnus & DJ SLAM! are working with their friends on “The Raw,” and the results is that names you’ll know from similar releases show up on the tracks – like Wordburglar on “Yogibear.” The predictability of the samples on the song doesn’t make it any less enjoyable – in fact it’s precisely the opposite – you’re rewarded for expecting Hanna Barbera inspired clips and rhymes on this track.

Don’t mistake their playful sense of humor or their ability to make music without mean mugging as being softness or weakness. “Hell-O-L” sounds like a friendly track by name alone, but it’s one of the hardest DJ SLAM! tracks on the whole album. There’s a sense of hip-hop continuity weaved into the lyrics, as we go from references to Slug & Murs to Lord Chief Rocka in the same verse, with Samurai sword sharp double entendre like “Your girl calls your dick a comedian/she laughs when it does stand-up.” OUCH.

It sounds like an unreleased Swollen Members track in the best possible way, and only increases my respect for the unconventional and skilled Ultra Magnus. There’s no shortage of gems on “The Raw” though, including the intentionally bleeped out and covered up lines of “Censorship,” the guest produced Sean-One track “Microphone Thrillah,” and the somber “Final Battle (It’s Over)” featuring singing from Maya Killtron. “I can’t front like I didn’t want a little bit of fame” says Magnus, but I think if he keeps making music like this he’ll have more than a little bit – and he’ll still be able to keep his playful side or walk around the city rapping in his bathrobe.