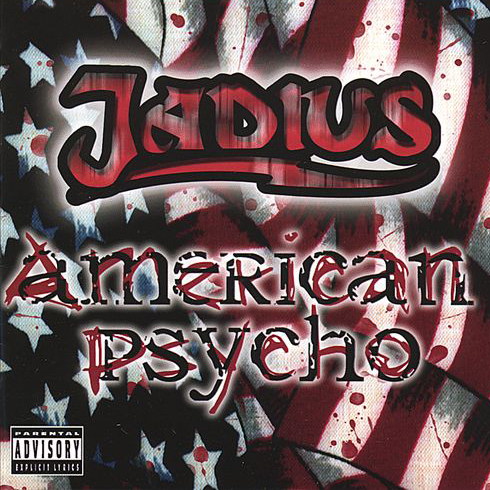 Jadius is one crazy guy, and he’s really angry about pretty much everything. This is both the dominant theme of “American Psycho” and the foundation its music is built upon. Accentuated by some ridiculously sociopathic skits (“I want to stab you to death and play around with your blood” opens the album), “American Psycho” plays out like Jadius’ violent fantasy.

Violence in rap is hardly anything new or revolutionary in 2007, so the question is whether Jadius’ bragging and posturing is supported by good music. This question meets with mixed answers. Granted, nothing here is bad at all. Jadius is unfailingly consistent, and the production is usually above average. The album’s title fits it perfectly, and Jadius treats it as a concept, playing the role for the entire album with an impressive swagger.

That said, nothing here is particularly exciting or surprising. By the time the third song plays through the album, Jadius has run out of new ideas, and starts repeating himself over and over again. He’ll hurt you, or kill you if you piss him off. He’s mad at everything about his life, and he might kill you just because he’s pissed off. Choruses consist of vague threats and pleas for violence, verses are much the same, with an added sense of arrogance. All in all, Jadius’ attempts at intensity come off bland and stale by the end of the album.

The production fares only slightly better. Just as aggressive, the music hits switches up more in sound than Jadius’ deliveries, and so keeps the listener’s attention easier. While most of it is not very exciting, there are exceptions. “Take 1” takes a chopped B.I.G. sample with a pounding bass line that will have any rap fan’s head nodding. In other places, Jadius uses samples that have already been used, so its effect will depend on how much rap you’ve heard.

Even though the production has its strong moments, it is mostly as bland and simple as the lead rapper. Much like Jadius, it uses aimless aggression as a crutch, becoming tired due to lack of true creativity. Jadius does not have any particularly strong moments, so the album’s entire appeal rests on the inconsistent production. Otherwise, despite Jadius’ best intensions, “American Psycho” comes off as forced and lazy.

It’s a rare album, even in rap, that is this focused on aggression. The constant posturing is done without any real type of skill, and it pounds without creating any sort of impact. It is consistent, but in this case, the consistency is flaw because the mold the album is built on is weak. Rappers like Eminem have been able to be successful because behind their violence is a strong wit and musical savvy. “American Psycho” ultimate fails because it possesses neither of these things, and stalls out in first gear.