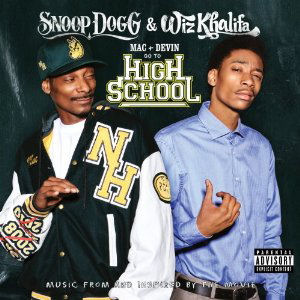 From rap music, to appearing in Chrysler ads, “The Price is Right” and “Starsky & Hutch,” Snoop Dogg is the quintessential hip-hop icon and mogul. He’s also made an equal amount of headlines for his status as hip-hop’s marijuana ambassador, either through his songs or many brushes with the law. Fittingly, the D-oh-double-G has decided to follow in the footsteps of Method Man and Redman’s “How High” and share a blunt with another weed connoisseur, Wiz Khalifa, as they both star in the upcoming film “Mac & Devin Go to High School.” Released in December 2011, Snoop and Wiz are featured on every track of this record as they attempt to combine their creativity on the mic and produce a quality soundtrack for their film.

As a duo, Snoop Dogg and Wiz Khalifa sound like they have been rhyming together for years. From the start of the record, the chemistry between the rappers is apparent as they both give off a fresh energy that differs from their solo albums. A good example of this is the funky, atmospheric “You Can Put it in a Zag, I’mma Put it in a Blunt,” where both emcees cleverly trade joint-influenced rhymes every four bars.

Though he won’t ever be known as a top lyricist, Wiz sounds more engaged on the mic with Snoop than he has shown to be in the past. The lead single “Young, Wild & Free” featuring Bruno Mars is another solid tune that contains a simple piano loop with bottom-heavy drums. It represents the soundtrack’s emphasis on setting mood above all else with easygoing lyrics mentioning weed, girls and high school. The standout track from “Mac & Devin Go to High School” is the late-night groove “That Good,” which contains high-pitched spacey synths and a thumping bassline. Snoop and Wiz sound especially smooth on this tune while flossing about the good life:

Snoop Dogg: “Snoop and Wiz, the new Cheech & Chong
We up in smoke, making street schemes
Smoking sticky green, having sweet dreams
Break it down, put it in the z-ig zag
And pull the top back and let the ass drag
Hit the switch, quickest way to get a bitch
Executive branch, get a whiff of this
Black car, sack a dank
High school nigga what the fuck you think
I’m passing all my classes with flying colors
And everyday I’m high as a muthafucker”

Wiz Khalifa: “Sun roof open, smoking while I’m rolling
My bitches only notice it if it’s potent
Bottle of Perignon, we can go kick it by the ocean
Get in between your legs
Join roaches and ashes all in your bed
You calling her babe, she calling me instead
‘Cause I put that game all in her head
Saw the crib, she know that I’m balling
When he ain’t have nothing they used to stall ’em
Now I with the Boss Dogg, all the bad hoes want him
And my pockets on swole, I’m talking Rick Ross big
Now when we shop we don’t care what the cost is”

The execution of this track is perfect with its outstanding production and solid lyrics by both artists, while also taking advantage of Wiz Khalifa’s knack for providing melodic hooks and bridges. The slow groove and 8-bit synths of “World Class” along with reflective lyrics from Snoop provide a nice departure from the rest of the soundtrack while Wiz adds extra flavor with a radio-friendly hook. Though the majority of the record is well thought out, a couple tracks do fall short. “French Inhale” featuring Mike Posner contains an exasperating chorus and concept as the two emcees speak about inhaling weed through their noses. This song makes the listener think the ganja talk has gone too far in some cases. “6:30” is also a disappointment as it features a lackluster hook and guitar-laden beat that seems out of place on the record, while Snoop and Wiz continue flossing in their raps.

The best element of “Mac & Devin Go to High School” is that for the most part the 12 song soundtrack flows well. Snoop Dogg and Wiz Khalifa sound like two homies who are genuinely having a good time and are not overcomplicating things or sounding contrived on the mic. As well, the production and hooks propel the quality of these tunes as the lyrics could have been sharper at times. Regardless of how much weed, high school and braggadocio talk are on the record, the duo are able to stay artistic and produce a worthwhile soundtrack that gives the listener an authentic sonic embodiment of their upcoming movie.