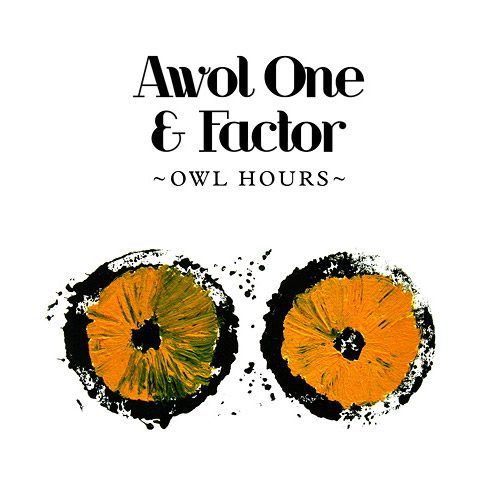 Awol One and Factor :: Owl Hours

“Owl Hours,” the second collaboration between Shape Shifters crew MC, Awol One (short for A Walrus One), and DJ/producer, Factor, is a self-professed party album. This description is a strange one. Awol and Factor’s “party” vibe lodges itself somewhere between the nihilistic decadence of N.E.R.D. and the nebbishy extroversions of WHY?. The album is a more appropriate soundtrack to a nitrous oxide filled high school debate kegger than a night on the town or block party. Indeed, our Cali b-boy does not seek to host a normal bash but rather to explore hedonism’s dark, or at least awkward, underbelly.

It is not surprising, then, that “Owl Hours” hangs its hat more on uniqueness than musicality. The strangeness of the LP largely stems from Awol’s off-kilter style and bizarre commentaries. More than flowing, he employs a dead-pan sing-songy grumble, somewhat reminiscent of a more grating Buck 65. This delivery certainly gives the album a distinct sound, sometimes with success. On “Celebrate,” for example, One successfully mocks his inability to sing â€“ half-carrying a tune with a haunting desperation – as he proclaims, in a distorted croon, “the lord has blessed us/tonight we celebrate and we dress up,” over Factor’s dissonant buzzings. Moreover, although there was no need to repeat the line ten times, as our oft self-indulgent rapper does, his observation that a chick he sees out “looks sexy in tube socks” is both odd and funny. On “Waste Wine,” Awol’s off-key chorus, “Friends don’t let friends waste the wine,” successfully sets a tone of miserable, aimless joy-seeking. “Back Then” features Walrus One engaging in raw introspection about his callous treatment of his high school girlfriend, his nakedly under-produced attempt at melody giving the track a genuine and visceral feel.

Still, there is a fine line between having a “unique delivery” and a “weak flow,” and, more often than not, Awol tends towards the latter. His non-rhythmic mumblings are more distracting than interesting, the album’s atypical vibe more unpleasant than intriguing. It would serve this backpacker well to take his cues from P.O.S. or Sage Francis, who have mastered the art of being strange and expressive but still demonstrating a knack for rapping.

It is thus not surprising that Awol gets shown up by pretty much all of the record’s many guests. Aesop Rock Ems him something wicked on “Stand Up,” delivering more interesting lyrics with twice the flow. Tha Liks are more clever and more competent on “Waste the Wine,” playing with the beat instead of chasing it. Pepper and Ceschi provide the most interesting segments of the overall successful “Back Then.” Even the somewhat out of place Xzibit’s over-the-top chorus on “Brains Out,” “I’ve got a date with myself and I’m blowing my brains out,” is far stronger than Walrus’s annoying monotone. Plus, Xzibit spits the line, “You’ve got a lazy eye/I still think you’re cute,” which exemplifies the type of twisted humor Walrus is constantly knocking at the door of but never quite achieving.

Even though the album begs thematically for the production to come full force with the darkness, the beats take an overly supplementary role to Awol’s flow. Factor is obviously a talented beatsmith, most at home when he is underlying Walrus with the genre-challenging dissonance the record seems to require. His talents are most obvious on the opening tracks. On the opener, “Glamorous Drunk,” Factor lays down a dense and looming guitar riff, immediately setting the LP’s macabre tone. “Celebrate’s” playful childish melody is wonderfully eerie. The third track, “Official,” succeeds with its hard-hitting clap, backed by fading echoes and distortions.

Still, as the record unfurls, these more creative sounds become the exception to the rule. For example, while “Darkness” begins with a creepy, ambient female vocal, the majority of the beat is an indistinct and unnecessarily minimalist percussion. Factor tries to fill the empty space in “Brains Out” with a bass-laden synth, but the beat still feels empty.

I am somewhat hesitant to publish a review so critical of an album that seeks to thrive on originality. Maybe Awol One and Factor are trend setters, and I am behind the times. Maybe, in 100 years, they’ll be considered geniuses, and I will look like a fool. But for the time being, for all its eccentric stylings, “Owl Hours” settles in quite comfortably at â€˜mediocre.’