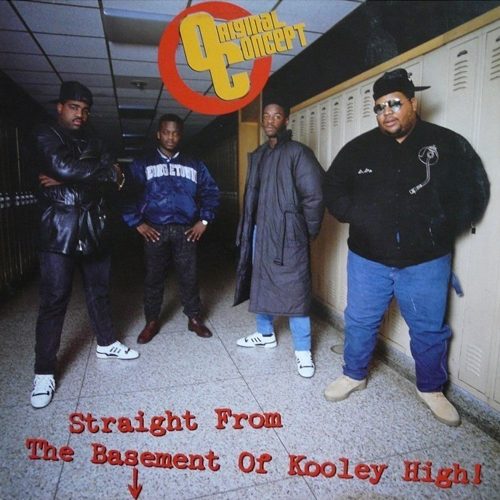 Original Concept :: Straight From the Basement of Kooley High

“Cooley High,” a major motion picture written by Eric Monte and distributed by American International Pictures, was released in theatres in 1975. “Straight From the Basement of Kooley High,” a not quite as major hip-hop album, was released by Def Jam and Columbia Records in 1988. Both turned out to have ramifications far beyond their original concept.

In the case of “Cooley High,” a high school coming-of-age tale about two young men named Cochise and Preach, the film is now regarded as a major landmark in black cinema and a seminal classic in Hollywood. In fact the movie was so popular that ABC tried to adapt it into a TV show. The initial pilot was a flop with test audiences, but you might be familiar with a revised version of the pilot written by Monte called “What’s Happening!!” Few people may realize the film was based on a REAL vocational high school which once served students from Chicago’s notorious Cabrini-Green public housing projects. The school has since been torn down.

In the case of “Kooley High,” a group of young men at WBAU-FM in the early 1980’s formed a hip-hop posse called the Concept Crew. If WBAU sounds familiar you may also remember a couple of up-and-coming rappers named Carlton Ridenhour and William Drayton Jr. who formed the Spectrum City DJ’s during their time there. No? Perhaps you know them better as Chuck D and Flavor Flav after they changed their group’s name to Public Enemy. WBAU produced a lot of future hip-hop superstars, and the Concept Crew was no exception. When they decided to record a rap album under the name Original Concept, the lineup of the crew included Tyrone Kelsie (T-Money from “YO! MTV Raps” fame) and Andre Young (Dr. Dre from said same) among others.

The movie? Well it’s still regularly shown on movie channels and film festivals, one of which I attended in college 20 years after the movie was first released. The movie was still funny, dramatic and at times heartbreaking despite the occasional dated slang and cultural references. The enduring popularity of the film and the TV show based on it can be found in numerous references to Cooley High in general, and to Preach and Cochise in particular, throughout the whole span of recorded hip-hop – including many rappers who like me were too young to see its original debut in theaters.

The album? Well the alumni from Original Concept have been more successful in their careers as radio DJ’s and TV show personalities than they ever were as rappers. To be sure the album is well-produced and mastered, but at 18 tracks it feels bloated and contains few true gems that are memorable. In fact the most famous thing to come out of this CD may be the song “Can U Feel It? 88!” There’s no rapping on the song whatsoever – it’s simply an Original Concept instrumental showing off their production prowess – but said same song was looped for Notorious B.I.G.’s verse on the song “It’s All About the Benjamins.” You know! “Fuck the state pen, fuck hoes at Penn State.” Never forget that in the words of Canibus, the greatest rapper of all-time died on March 9th. He owes the impact of one of his greatest verses to Original Concept.

Now I did say there were a few gems, but they are few and far between. “Legend” has a funky saxophone backdrop and simple storytelling lyrics that work. The P-Funk samples and Run-D.M.C. scratches of “Runnin Yo’ Mouth” also work. Dr. Dre and T-Money’s comical stylings on “Here Come the 5-Oh!” make it the least serious song about rappers run-ins with the law one can ejnjoy. “Fatlady” isn’t so funny but I can live with it just for the Fat Boys samples. Beastie Boys member Mike D even has a minor cameo on “She’s Gotta Moustache,” but you’d have to be an audio surgeon to detect it. “Pump That Bass” may be the track that best survives the test of time, as another instrumental with no rapping and a lot of enjoyable scratching, with guitar riffs like a lost Rick Rubin classic. This album is hit or miss, and often miss, but at least has the advantage of sounding like vintage 1980’s hip-hop in an era where nostalgia is in. That’s the good news – the bad news is that “Cooley High” the movie is much easier to find on DVD than “Kooley High” the album is on CD. My advice would be if you were only going to track down one of the two would be to buy the movie. It’s a better investment of your time with a much higher chance of being played more than once.