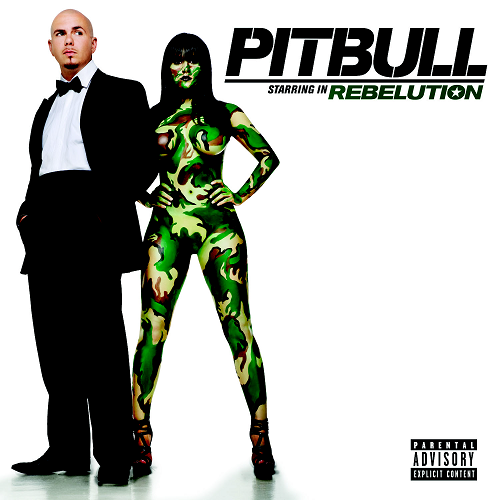 Last year Pitbull was one of the hottest free agents on the market, looking for a major label to sign him and put him back in the mix. It didn’t take long for the Miami reggaeton sensation to find a new home, and with the combined marketing power of Polo*Grounds, J Records and the entire RCA family behind him he was quickly tearing up the charts again in 2009. Three different singles charted before “Rebelution” was even released – the pounding “Krazy” produced by and featuring Lil Jon, the infectious and sizzling dancefloor sing-along “I Know You Want Me” and the electronic sex ode “Hotel Room Service” laced by Jim Jonsin. Somebody let the dog off the leash and he’s running wild!

These days it’s easy to buy singles a la carte though, so Pitbull’s success on the charts may unintentionally undermine sales of “Rebelution.” The Cubano sensation looks dapper on the album’s cover, a modern day reggaeton James Bond complete with stylish bowtie. Standing next to him is a mamacita either wearing a camouflage paint job from head to toe or a VERY form fitting jungle sniper outfit. She’s not exactly dressed to meet him at the hotel room, but the two definitely look ready to star in a TV show based on his life and times. Hints of that story have been heard in his previous releases, but the son of Cuban exiles is more interested in partying than the revoluciÃ³n on “Rebelution.” Out of 14 tracks on the album, “Triumph” featuring Avery Storm comes the closest to showing off his pride, not to mention his underrated lyric writing ability.

The rest of “Rebelution” takes you on a dizzying whirlwind tour through the Miami party scene, offering you a variety of sugary and colorful drinks to keep your head buzzing and pushing you closer to an inevitable musical hangover. The Clinton Sparks produced “Shut it Down” featuring Akon is almost exactly what you’d expect before even listening to it, which I fear may be a backhanded compliment. “Moved up from the streets/graduated hustler/on his way to an entrepreneur… my life’s a movie, call me Martin Scorsese.” That’s true, but this song isn’t that movie – it’s an ode to getting punani with Akon playing the wingman. “Girls” doesn’t vary far from this theme either, featuring a woman who repeats the old “tri-sexual” joke in the opener to set the tone. The Dr. Luke & Ammo beat is reggaeton – heavy electronic beat and tempo, which makes it as perfect for the dancefloor as it makes Pitbull’s rhymes irrelevant. “Can’t Stop Me Now” features a crew of New Royales that aren’t memorable or identifiable which again leaves the beat the key feature – this time done by DJ Khalil – along with an unidentified female crooning the hook.

So it goes throughout the rest of “Rebelution,” an album whose only real act of rebellion is to keep partying even during an economic downturn. The sexual metaphors aren’t even subtle on tracks like “Juice Box,” and when Pitbull unapologetically says he’ll “Give Them What They Ask For” he means both the many females he pursues and the listeners he hopes will purchase more than the singles. That may be a tough sell though given the album’s best songs already hit radio and what’s left are lesser versions of the same topics & themes. There can be no doubt though that Pitbull is giving the majority of his audience exactly what they asked for though – club music. My own expectations and perception of Pitbull’s ability to deliver for more than just for the dancefloor present a bias that’s quite possibly unreasonable in context. If all you really want to do is party, there’s nothing wrong with “Rebelution” whatsoever – Pitbull makes some of the best party music in hip-hop today. The dapper James Bond attire may lead one to think he’s on a secret mission to overthrow Castro’s communism, but in reality he’s dressed for a night on the town and a vodka martini. “Rebelution” will leave you shaken, but not stirred.