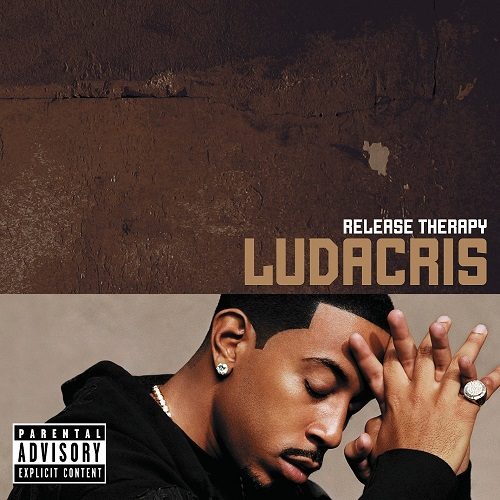 Christopher Brian Bridges. Wasn’t he that kid from Beverly Hills 90210 that thought he could rap? Hung out with the Pharcyde, put out an album nobody bought, all that shit? What – that’s Ludacris’ real name? Nah you’re playin’ with me. Seriously? Ludacris is Christopher Brian Bridges? Well I be damned. You know that’s almost as nerdy as… well… that’s almost as nerdy as Steve ‘Flash’ Juon. If I was him I’d call myself Ludacris too. The irony is there’s unlike that Brian Austin Whazhisname fellow there’s nothing ludicrous about his rap career at all. If Ludacris was really ludicrous that would mean his raps “merit derisive laughter or scorn as absurdly inept, false, or foolish” according to the good ol’ Merriam-Webster Dictionary. His raps do elicit laughter but not from scorn; rather Ludacris is the Champaign, Illinois born and Atlanta, Georgia rap version of Redd Foxx. If you find Ludacris offensive your funny bone has probably been surgically removed, and on “Release Therapy” he wastes no time getting raucous right from the “Warning (Intro)”:

“I be that nigga named LUDA give a round of applause
They say I’m up to no good, I’ll say I’m down for the cause
Down for whatever goes down, I’m strapped down to my drawers
So if you up for some stitches then I’m down for some scars
Down to make ’em GET DOWN, stop playin and pause
There’s two things I never break and that’s my word and my balls
So here’s a temporary fix for your permanent flaws
This album helps you to RELEASE cause life is irkin us all
Enough to make you wanna break shit, no longer will I take shit
From ANY of these clowns cause I’m TIRED of the fake shit
I’m ready for some action, ready with a passion
Like pots with the steam I’m ready to get it crackin”

You might get the impression Ludacris’ is going hardcore by the way he positively YELLS these lyrics into the mic, but rest assured Luda’s still got the wit and the good sense to make a smash hit. Of course it doesn’t hurt when The Neptunes produce it and Pharrell guest stars on it, but without Luda’s rap on “Money Maker” it would be just another Neptunes song. It’s his charismatic personality and brash lyricism that make the song a chart smasher:

“Luda! I’m at the top of my game
You want my hands from the bottom to the top of yo’ frame
And I, just wanna take a little right on your curves
And get erotic givin your body just what it deserves, and
Let me give you some swimmin lessons on the PENIS
Backstroke, breast stroke, stroke of a GENIUS!
Yep!! Call me the renaissance man
Get up, and I stay harder than a cinder block maaaan
Hey!! I’m just a bedroom gangster
And I been meanin to tell ya that I really must thank ya when ya
(Shake your money maker like somebody ’bout to pay ya)..”

Ludacris albums need to be a careful balance between his over-the-top lyricism and beats that can keep up with his bravado. None of his albums to date have been whack, but some have tended to skew too heavily towards one or the other without being just enough of both. This time on “Release Therapy” it seems that both the beats and rhymes were carefully measured out in just the right amounts. “Grew Up a Screw Up” has a pulsating dirty DJ Nasty & LVM beat that matches both the Notorious B.I.G. sample and guest vocalist Young Jeezy quite well. Atlanta’s native hitmaker DJ Toomp might make you think you’re listening to a T.I. track with “Mouths to Feed” but Luda makes it his own with his trademark punchlines such as “I stay in heavy rotation like a washing machine” and “can’t keep up with the news but I get that Daily Paper.” R. Kelly and Ludacris collide and collab’ on “Woozy” and Ken Jo makes sure the beat is smooth enough to slip into any mix. And when it’s time to get as serious as cancer Luda calls on Andre Harris and the two go to “War With God”:

“Look, I’m the best and there’s nothing that you can do about it
Never needed a publicity stunt, let’s tell the truth about it
Even in the core of the streets, you can’t sway the youth about it
But keep runnin yo’ mouth, and I swear I’ma knock a tooth up out it!
I never claimed to be nuthin but who the fuck I am
Never sold cocaine in my life, but I’m still the FUCKIN man
Understand, nuthin you did makes you better nigga
You claim the streets, but the streets respect that cheddar nigga
Luda got twice as much your life you can charge it to ’em
I fit four of your houses inside my daughter’s room
And still have room for young Karma to play
Givin back to the children of tommorrow, for good karma today
So you can say whatcha wanna say, and you can talk that talk
But real niggaz ain’t doin no talkin cause we walk that walk
Album for album you can see I got a multimillion plan
So call yourself whatever you WANT, except the multimillion man, nigga”

Despite the fact Luda feels the need to go on the offensive there’s really nothing to hate on “Release Therapy” unless you’re just a straight up hater. Even if the name on the cover was Christopher Brian Bridges or Chris Lova Lova you’d be hard-pressed to deny the dopeness of tracks like “Do Your Time” featuring Beanie Sigel and Pimp C, “Runaway Love” featuring Mary J. Blige and straight up crazy solo songs like “Girls Gone Wild.” There’s nothing ludicrous about Ludacris giving his fans exactly what they want, and it’s even less ludicrous that he will probably convert more new fans on the strength of “Release Therapy.” It is indeed a very therapeutic experience, one that will relax your mind and let your conscience be free as you get down to the sounds of the L-U-D.