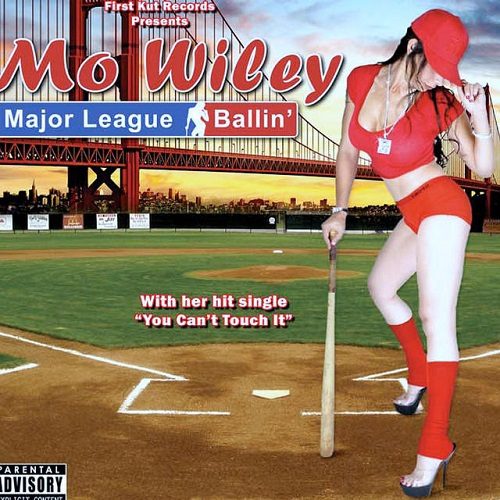 “I make love but I don’t do dishes
We can tell secrets, don’t dig snitches
Got an attitude, I’m the queen of the bitches
Whole world love me like Alicia
Jump in your ride, feel the breeze
Just turn the keys, I don’t need ya
Never seen Mo on her knees, please
Already got my wrist on freeze”

Kali-4-nigh-A look out! There’s a hot new hip-hop bitch in town looking to take over. Wait a minute – that’s not quite accurate. When looking at the album cover there’s no question that Mo Wiley is “hot” in the looks department, and if she says she’s the queen of the bitches, one can only take her word for it. Does this mean that Mo Wiley can take over and be the next Lil’ Kim, Trina or Suga T? Stay tuned for more on that topic – let’s introduce you to Wiley first. Described in her press release as a “Bay Area female gangster rapper” who is an “exciting entrepreneur [with] incredible business sense,” Mo Wiley got her start opening for Cappadonna at the 24K Lounge, and quickly moved up to performing with Layzie Bone and Tha Jacka at the 2009 King of the Streets Car Show. She has her own clothing line described as “sexy but not overly risque” and recently inked a deal with Morey Alexander, whose major claim to fame is managing the L.A. Dream Team along with Jerry Heller (who later formed Ruthless Records). On her debut album “Major League Ballin'” Wiley is Bay Area and proud of it as evidenced by her song “I’m From Da Bay”:

Unfortunately this reads better than it sounds, and it doesn’t read that hot to begin with. Mo Wiley has an incredibly stilted and unnatural flow, sounding like she’s trying incredibly hard to ar-tic-yoo-late every syllable of her rhymes. Having to double up your own flow instead of having a DJ screw or chop it is a little bit cornball unless your name is T-Pain, so that’s a fail too. The beat by Anthony Massaracchia leaves something to be desired, as it’s made up largely of two notes that sound like someone throwing pennies at glass bells. It’s not long in her song before this becomes headache inducing, and the minimal electronic melody and tinny drums don’t improve matters one bit. Let’s try her “hit single” as listed on the album cover instead – “You Can’t Touch It.”

“It’s the real bat swanga, I’m a baller
Ice on the wrist all the way to the collar
Swingin the whip, East Oakland now holla
A bad bad bitch they all gon’ follow
A bad bad girl in a bad bad world
Walk up in the club, you betta watch your girl
You can get your nut, but I ain’t your squirrel
A less plain girl, you see I’m diamonds and pearls
Pimp slick beats, yes I am
(Go get ’em Mo) Yes I can!
Got bigger balls than them other fuckin men
Female thug, yes I am”

Plus sides to the “hit single” – Mo Wiley’s flow sounds much mo’ natcharow err natural, and the bass on the beat is much heavier. This is a song one could believably ride around booming out of the trunk. Minus sides – Wiley’s lyrics are still incredibly simplistic, consumeristic and materialistic. Mo Wiley’s “gangster” as such seems to be how hot she looks, how much money she can make, how much she can spend, and how cool her cars are. Perhaps I have different expectations than Mo Wiley but when someone describes themselves as a “female gangster” or the “queen of the bitches” I expect her to thug it up a little bit. I want to hear how she pistol whipped any chick stupid enough to disrespect her, how she hustled on the street corner to get her paper, and how she filled her boyfriend’s car with cement when he cheated on her – possibly with him in it. If being gangster means knowing how to use a Visa card at the mall though, Wiley is as gangster as they come, a self-described “E True Hollywood Story” on “They All Like It.” Guess I’m not one of THEM that does, though she brags they like it most “when I back it up like that.” That part I can believe – she’s not an unattractive lass.

As bad as Wiley’s rhymes can be at times, it’s really the unappealing beats that hurt her the most, as there’s nothing to cover up how vapid her rhymes are or how poorly they are delivered. There’s a very repetitive sound to Anthony M. on the track, almost as though he finds one loop that doesn’t suck by trial and error then repeats the hell out of it. Sometimes being original ISN’T better than having good samples, and I wish to hell he had jacked some George Clinton or Isley Brothers. “My Ghetto” tries to make things beautiful with pianos and symphonics, but the elements aren’t balanced with each other well and when Mo’s not rhyming you can clearly hear there aren’t more than two bars of sound to it. “Mo Wiley” tries to go heavy on quick drums like a New Orleans rap track but Mo’s flow doesn’t change up with it, and the entire thing is a hot mess Juvenile would never touch. The closest anything comes to her “hit single” is “I’m On Da Top” and that’s not saying a lot, but since the beat is only bass and a car rushing by there’s not much here to mess up. She might be a well-liked opening act in her own turf, but to say Mo Wiley is “Major League Ballin'” would be a gross exaggeration. She’s more like a AA player who got called up late in the season, struck out a few times, and got sent back to the minors.