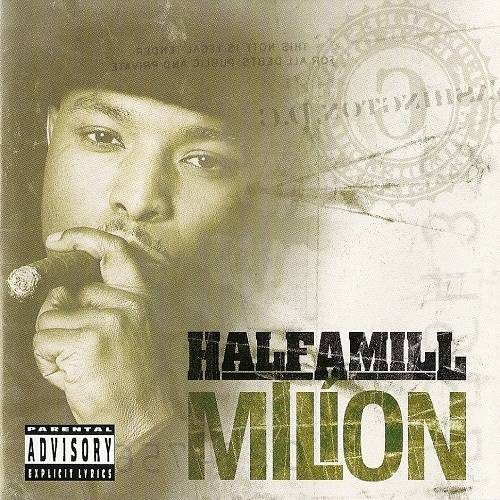 The Firm was a short-lived rap supergroup that failed to live up to expectations with “The Album.” While most people, including some of the involved, quickly tried to forget about it, the idea of The Firm continued to occupy the minds of a few others. Cormega for instance was reluctant to forgive and forget the fact that he was replaced by Nature after being scheduled to be the Firm freshman. Member AZ pursued the Firm aesthetic in style and spirit on “Pieces of a Man,” explicitly representing the company on at least four of the album’s tracks. And then there was Half-A-Mill, who had been featured on “The Album”‘s closing track, “Throw Your Guns.”

Earlier in the ’90s, Half-A-Mill (original spelling Half-A-Mil) would be one of the many fighting for airtime late at night on NY radio. His first break came when Mister Cee introduced him to Big Daddy Kane in 1993, who wanted him on his label (Black Caesar Records) that never quite got off the ground. Reportedly he also recorded a demo with DJ Scratch before self-releasing his debut single in 1994. He was signed to Penalty Recordings for a moment, which was bought and then discontinued by Tommy Boy. His Firm internship eventually led to a deal with Warlock Records, where he released two albums. While working on a third one, he was shot dead in his home in Brooklyn’s Albany projects October 24th 2003.

Born in 1969, Jasun Wardlaw made his full-length debut at 31, an age when most rap careers begin to draw to a close. He was a rap artist who lived and died in the projects. Rap was his means to envision a better world – mostly for himself, but also for those around him: “I got one goal, to put gold on the streets where the projects is.” Like most rapping hustlers, however, Half-A-Mill also makes the point that ‘the streets’ are already paved with gold, you just have to know how to dig for it. He doesn’t detail how, instead he does what is known as flossing and flaunting.

The come-up is ever-present on “MilÃ­on”: “We from the housing bricks pushin’ year 2000 whips / We went from ounces to bricks, house on the cliff, thousands on the wrist.” “We used to (…) play stick ball – now we stick y’all / Out to get it all, been through it and did it all / With it all, plan to top-of-the-world and split it all / Been rich, been poor / spendin’ ends in the Benz store.” “See us flossin’, you swear to God we robbed Tito’s / Car paid for, smack the shit outta the repo / Every verse is like kilos in the streets, yo.” Et cetera.

While a skilled rhymer, Half-A-Mill in these instances has a hard time putting himself apart from those people that immediately come to mind upon hearing his crime-ridden flow – Nas, Noreaga, Tragedy, Cormega, Noyd, Nature. A Brooklyn cat with a QB slant similar to AZ, in 2000 Mill Gates was still a Firm representative, even after the associates had filed for bancruptcy. On the rowdy party track “Thug Onez,” a Neptunes-produced afterthought to “NORE” that made a bit of noise for the upcoming album, he’s simply along for the ride with Noreaga, Musalini and Kool G Rap. On “Bounce” him and West Coast veteran Spice 1 meet halfway with stuttering Midwestern flows for the album’s most awkward track. Things don’t quite work out on “Don’t Go Away” either, with Charisse of Changing Faces doing an innocent Minnie Ripperton rendition while Half proclaims his sexual prowess with tongue-in-cheek profanity. He gives a similarly solid performance on the really well written “Ghetto Girl,” but Sha Self’s (AKA Sha Money XL) ho-hum bubblegum beat and the crowded chorus work against his good intentions. “Gimme Ya Luv” is a cross between both, mixing the mental and physical aspects of love over a classy, Curtis Mayfield-sampling track. This is a fine example of Half-A-Mill putting his sense of imagery to good use:

“I’m royal, so let my seed soak in your soil
Let me open this for you, got the coconut oil
Divine-I-C-King got you spoiled
3/4’s of water that covers your surface boils
I got preservance in them coils
My lion from Zion, sexy tiger from Niger
Sayin’, ‘Half, I wanna ride ya,’ full-length up inside ya
Multiply like Elijah, got you drippin’ saliva
40 Thieves between your knees, get hit with the Baba
Get all you can get tonight cause you’ll be splittin’ tomorrow
Way down on Greyhound, with a hidden revolver
Your body consist of matter, girl, and I’m the resolver
The rising sun got you on your knees, sayin’, ‘Please Father'”

Another highlight is “Some Niggaz,” previously released on the “Belly” OST. For a rapper that often only seems concerned with stringing self-indicting sentences together, Half does a good job sticking to a song concept – and in the middle verse to a storyline:

“Streets is too real, thugs nowadays is too ill
Fuck a hundred thou, I need a few mill
even if it leaves you killed
You restin’ in peace, I rest with blue steel
I’m even wettin’ police and Navy blue Seals
How crazy you feel?
Militant clique, 10 in the whip
I know bohemians with plenty of chips
Pull this off and we’ll be rich, filthiest, Top Billin’, Milk-iest
In the Hamptons, I know the mansions where they live
They on some Ram shit, Hindu niggas, readin’ Sanskrit
I want a man by every exit, so they can’t split
Rush the crib, all we see is candles lit
Yo, they got gold cows, gold owls, on some chantin’ shit
Tie them up, red-dot them up, fuck the ransom shit
Hit the safe, chips in the case, back to the whip
Dun, we laced, back to BK
Albany, relax in the PJ’s
Splittin’ mathematics on a weekday
Salmon P. Chases stuffed inside of briefcases
Quiet Money, keep our mouth shut like Freemasons”

“Thug Luv” is interesting in that it isn’t your standard ‘I miss my homies’ song because he thinks optimistically of those mysteriously missing: “Y’all probably pushin’ gold Porsches / Cribs with gold faucets / Pimpin’ hoes who pose for portraits.” The song also showcases Half’s mystic side when he talks about “cats in CIA jails, men in black prisons / who got caught with cabbage from Egyptians / Semarians contacted by aliens / black Elohiem trapped in the beast / kidnapped from the east / now in the western hemisphere trapped in the streets.” Paranoid speculations such as “We was tricked from birth / enslaved, whipped from birth / stripped from birth / probably microchipped from birth” you’re more likely to hear from a Killah Priest or an Ill Bill than from your average thug rapper.

“Tuff Guy,” on the other hand, is completely immersed in rap’s mob era (of which “The Album” was supposed to be a highlight of), with Half and Ali Vegas engaged in Goodfellas-style dialogue, which is entertaining but not exactly groundbreaking. Other tracks are more substantial. The Trackmasters-produced, AZ-featuring “Quiet Money” would have become “Pieces of a Man,” where it first appeared as an interlude. Again Mill manages to drop a few gems on ’em:

“The money made even the hardest get stuck
The smartest get fucked – Honest for what?
This world is Sodom and Gomorrah
Niggas ain’t promised tomorrow
Only thing you promised is projects
false prophets, 50¢ beers, SSI checks”

Another fruit of the Trackmasters connection is “What U Ridin,” a classical-tinged composition by Gowdy with Nature and Half politickin’ on hood topics. Rounding out the production hot list is Just Blaze, who, while doing his best LES impression on “Thug Luv,” brings the heat on “Fires in Hell” (also on the “Black Mask” OST). Proving that big production names are not mandatory, DJ Ali and Mill competently lace “Thuggest Enemy #1” and “Where BK At.” Especially the latter was a well chosen single with its “Just an Illusion”-inspired bassline and live Biggie audio. Mill brings honor to his hood with lyrics referencing BK rappers (and Rakim):

“Brooklyn, Brooklyn, funky-funky fresh
I be the Greatest Entertainer like Doug E. Fresh
Bring the pain like my man Kane
Gucci frames like Dana Dane
It ain’t a game, but things change
Still spit flames, lyrical flame
lyrical reign, my slang bang’ll injure your brain
With minimal game rap individuals’ll get slain
Go get your crew, whoever you bring is gonna lose
Officialist dude, who want a lyricists feud?
I’ll make lyricist food out of you gimmickal fools
Give him some weed, give him some dust, give him some booze
He ain’t ballin’, he fallin’, I floor him, give him some room
Hit him up, split him up, let his bodyguards get him up
We party hard in Brooklyn and we don’t give a fuck
Of course, money, I floss money like Sauce Money
pop Cris’ and pour bubbly till we all ugly
I’m a mack, chicks all love me
Whether on the train or Porsche buggy I get brain lovely
4.6 Range, keep your change money
Jigga, Bleek, and Dame is doin’ they thing, money
M.O.P.’s a friend of me, Buckshot’s the energy
Cocoa Brovaz a kin to me, O.G.C.’s the entity
I’m a real MC, somethin’ most pretend to be
But ‘you’ll get fried in the end when you pretend to be’
from them streets where them crooks is at
What you lookin’ at? Where Brooklyn at?”

Why isn’t Half-A-Mill held in the same regard as other rappers who met an untimely death? Part of the reason is the fact that he came late to the party and didn’t wear a particularly original outfit. But was there really another route for Jasun Wardlaw? It all seems tragically predestined when you consider his first two published songs were called “Any Day Can Be Ya Last” and “Another Homicide Scene.” The truth of the matter, however, is that rap was this man’s attempt to fulfill another destiny, the one he conjured up himself. You can hear about it in these very raps.