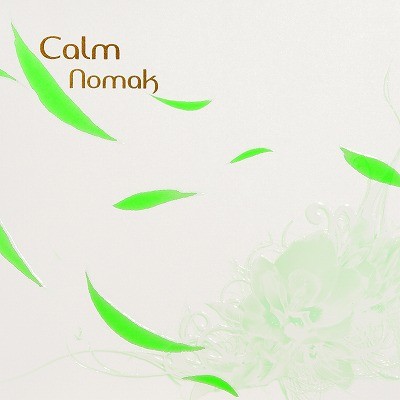 Occasionally I’ll get a fan e-mail at RapReviews.com that goes more or less along this line: “I think it’s really great that you reviewed +X+, but what about +Y+ and +Z+? They’re on the same vibe/from the same place/doing the same shit.” Well I got just such an e-mail about Nomak, noting that in the past I had covered fellow Japanese hip-hop artists like Shing02 and DJ Krush. There are some unfortunate barriers to covering Japanese hip-hop though – a lack of websites with an “english please” option (some even block visitors outside Japan), the heavy cost of importing albums and a lack of support for downloadable alternatives from Amazon or iTunes. Nomak’s “Calm” falls behind all of these barriers, but as it turns out the fan who requested I cover the album was willing to provide me some alternative (*cough bootleg cough cough*) means of acquiring “Calm,” feeling that my review would be doing the public service as well as offering the Japanese scene much needed exposure.

Let it be said that Nomak’s “Calm” was a fine choice to represent for the Japanese hip-hop sound. Unfortunately I can’t give you much in the way of biographical info about this producer – he’s got a MySpace page with no bio and a personal website with a bio painted in kanji that I can’t even cut and paste to translate. My apologies to the artist and/or his fans. So instead of telling you what I can’t, here’s what I can say about Nomak – “Calm” is a very fitting name for this beautiful album. If you can picture yourself at a hanami (cherry blossom) festival, enjoying the tranquil beauty of nature and taking in the mono no aware of it all (the ephemeral and transcendent nature of life) all while listening to shakuhachi set to a smooth hip-hop beat, then you’ve got the very essence of Nomak down before even listening to “Calm.” While Nomak’s bio may not easily translate into english, there’s no question that the language of music is universal, which is why you can hear Abstract Rude rapping on “Hi, Mom! ~A Prayer For World Peace~.”

“Uhh, c’mon young world, we gotta grow up
There’s more to life than havin yo’ fun and gettin to’ up
Your uncle tried to tell you be smart, stop bein stupid
Cause uh sooner or later we all face the music
You’re gonna mind somebody, whether the police
or the code of the streets because the beef won’t sleep
Until a youngster lie dead to give his family grief
And then the church people rally for some peace in the streets
The family that prays together, stays together
That’s through the rough days, toughest weather
This prayer I say for my mother, I couldn’t be like Cain killin his brother
Cause y’alls my kinfolks forever”

Even though the vibe of “Calm” is deeply peaceful, one shouldn’t mistake that peaceful tranquility for weakness. The songs Nomak composes are strong and powerful, evoking deeply felt emotions while offering strong hip-hop beats that many guest artists can rip to – artists like Pismo on “One Fist” and the cocky cockney female rapper TOR on “Time of Reflect.” Even though it can be hard to understand such accents at times from an American hip-hop background, the choice of piano loops in the backdrop play off her tone perfectly and make her far easier to follow than Lady Sovereign. Even when there’s no rapper to bounce off of though, Nomak always make the right choice. “Force For Truth” starts out with a drum track so crispy you almost expect to hear B-Real’s nasal delivery “How I Could Just Kill a Man” style, only to find that two bars in there are soft echoing keys, lightly used sped-up vocal samples, and unexpected audible reversals that bring your attention back to the cymbals, drums and smooth melody.

At times like these I regret using a cliched phrase like “these words won’t do the artist justice” but for Nomak it’s entirely true. Let me put it this way though – if you weren’t in a chemically enhanced mood to begin with, you’d feel like it just by listening to “Calm”; if you WERE in such a mood this album would be one hell of an enhancement to it. Nothing can seem wrong when listening to an album this right, giving tracks named “Ultimate Eternity” a depth even their composer may not have intended. As the heavenly choir sings you find yourself taken to the higher level KRS-One, Inspectah Deck and Guru have been looking for all along – hip-hop that truly floats above the clouds.