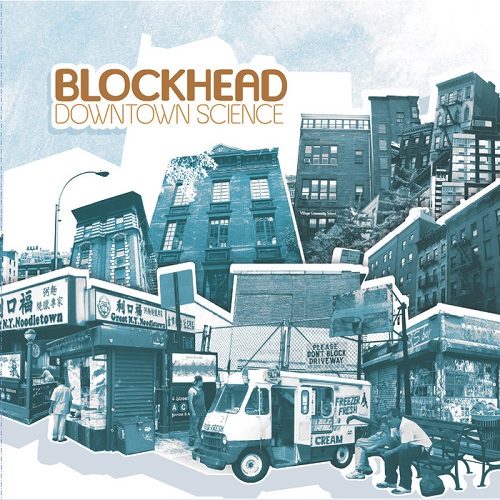 For the past quarter of a century, rappers have explained the Bronx, Brooklyn, Queens, Staten Island, Long Island, and even Rikers Island to us. Manhattan Island has, with the evident exception of Harlem, never been a particularly prominent setting in New York rap. Manhattan is where the music is professionally recorded, performed, promoted and subsequentally sold to the world, but it’s not a place that is shouted out on every other classic song, and repped by countless rap celebrities. While Uptown has produced a number of hip-hop legends, from Doug E. Fresh to Big L, Downtown may be workplace for many hip-hop musicians, but not birthplace. Few may remember the song from which I’m about to quote, but when Kool Moe Dee said in “Wild Wild West,” “I used to live downtown – 129th Street,” he was merely pointing to a lower part of upper Manhattan, but still within Harlem. So if it wasn’t for this here record, yours truly probably wouldn’t have remembered Downtown Science, the duo signed to Def Jam at the turn of the ’90s, who, while not having had an immediate influence on “Downtown Science,” may have been evidence to a young Blockhead that hip-hop can indeed originate from lower Manhattan.

The catch is that Blockhead is not a rapper, he’s a beatmaker. It is hip-hop’s handicap that we’ve come to rely on rappers to give us an impression of what it’s like to be “in the mix of action” (as Prodigy once put it). Sometimes we concentrate on the spoken word so hard that we barely notice how essential the music is in conveying emotions and moods. When in fact we wouldn’t be nearly as fascinated with rapper X’s verbal imagery if it wasn’t for producer Y’s beat serving him as a canvas. Substitute X with Aesop Rock and Y with Blockhead in this equation, and you are bound to discover why a different, demanding vocalist such as Aesop was able to establish himself as one of hip-hop’s most unique voices since making himself heard above the avantgarde underground with “Float” and solidifying his rep with “Labor Days,” both of whom banked heavily on Blockhead’s input. That was at the top of the new millennium, and by early 2004, Blockhead was ready to let his music speak for itself, debuting on the prestigious Ninja Tune label with the critically acclaimed “Music By Cavelight.” Having just contributed beats to Cage’s sophomore effort “Hell’s Winter,” in late 2005 Blockhead is back with “Downtown Science.” The vinyl edition comes as a two-piece, while the bonus DVD accompanying the compact disc features visual interpretations of “Music By Cavelight” as submitted by film makers for a competition held by Ninja Tune.

Thus inviting comparisons, the CD edition of “Downtown Science” reminds us that “Music By Cavelight” was well-rounded, calculated surprises sprinkled atop a mostly serene soundscape. Critics described it as melancholic, but more often it was melodramatic, placing itself firmly in hip-hop territory, rather than the expected trip hop vicinity. In terms of instrumentation, the follow-up is less jazzy, but actually more playful, the daytime bustle and hustle replacing the nocturnal atmosphere. As if to enforce the different notions people have of Downtown NY (contrasting with Up- or Midtown), Blockhead, himself a native Downtown New Yorker, marks the beginning or the ending of several songs with (sometimes sped up) samples from sentimental Broadway musicals from yesteryear. “Roll Out the Red Carpet” for instance is introduced by a couple setting up a date – “Yes, but where? / Washington Square / 11 o’clock / I’ll be there” – before cinematic horns segue into a swingin’ bass/drums combo that soon becomes enveloped in generous layers of horns, pianos, strings and singing. Not to mistake “Downtown Science” for a retro trip back to a time before anyone of us was even born, but some of the samples Blockhead wrestled from the hands of time are rather dusty. In what seems like a clash of cultures and eras, Blockhead uses “Stop Motion Traffic” as a melting pot for stuttering drums, bleepy keyboard basslines, Asian harmonies, abrasive guitars, sounds manipulated into animal noises (bird chirps, pig squeaks) and another cheerful couple marvelling at “the Village in summer,” where “all the people look so happy” as “everybody seems to bring their nicest dreams to the Village for all to see.”

Having read a number of reviews of “Downtown Science,” most song descriptions fellow critics came up with struck me as wrong. That’s the trouble with instrumental music. It’s hard to make clear statements, especially when normally rappers tell you all you need to know about themselves and their music. It would be an illusion to assume that my own observations about “Downtown Science” would be any more objective. As a RapReviewer I’m thankful for every bit of monologue or dialogue, like the mournful “It’s not unusual – probably hundreds of wonderful love affairs go bad in this town every week” that introduces the opening “Expiration Date” and provides the song with a definite theme. The soundtrack to this expired love affair for once deserves the tag melancholic, as heavy drums move along in a sluggish tempo, the dominant rhythmic backing only occasionally illuminated by a lone trumpet and outer-worldly voices.

While Blockhead fuses the most disparate components in his compositions, often taking instruments out of their original context to the point that it becomes hard to identify them, one notable ingredient are the voices. Almost every track features wordless vocals. Electric guitars are another prominent feature. Their incorporation is not always as smooth as in “Dough Nation,” where a screeching guitar blends seamlessly into a majestic horn section. The short guitar solo on “First Snowfall” fails to fall into place, try as it may. Sometimes, an arbitrary mash-up makes more sense than an arranged marriage, as evidenced by the vibrating strings opposite what sounds like a didgeridoo in “Dough Nation.”

With the exception of the almost epic “Quiet Storm,” the songs on “Downtown Science” aren’t meant to develop. They are subject to a constant, slow morphing process. The downside of that is that even the tracks that are the most ambitious in terms of the range of emotions they are supposed to emit (“Good Block, Bad Block”), lack a purpose. Once they’re over, you’re left shrugging your shoulders instead of feeling like you have just been exposed to something that was meant to exist. Even more stringent songs like the cut-n-paste throwback “The Art of Walking” can’t make this album more cohesive, on the contrary, they help scattering the contents all over the place. The closing “Long Walk Home” with its lonesome cowboy vibe is Blockhead’s attempt at bringing a story to an end that he didn’t really bother telling. But even though the tracks on “Downtown Science” sort of come and go, they are always animated enough to demand your attention. Compared to its predecessor, “Downtown Science” is decidedly less organic, at least in a musical sense. But just like daylight it brings about new colors, shapes and scales, which might actually make it more filled with life.