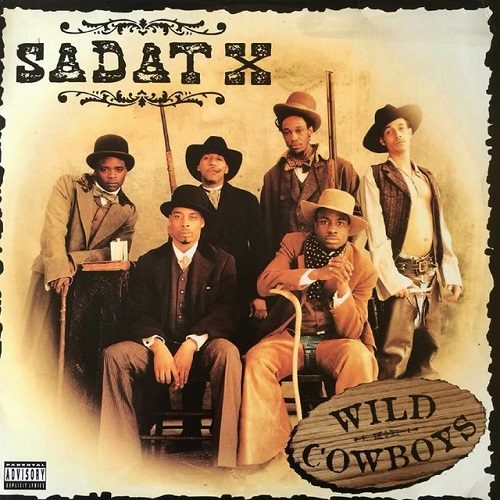 Looking at American history, one would expect US rappers of African descent to relate to the lot of the continent’s native people. Such sentiments were indeed expressed throughout rap history. Let’s hear it from some trusted voices. Kool G Rap: “I’m no villian, so why would I be killin’ Indians?” (“Erase Racism”). Nas: “The Indians saved the pilgrim / and in return the pilgrim killed ’em” (“What Goes Around”). Scarface: “They try to do us like the Indians, killin’ us like wild beast” (“Smartz”). Ice-T: “Won’t speak on the Indians, shit’s insane / Fuck John Wayne” (“Race War”). Ras Kass: “Stealin’ land from the indigenous natives / gave them alcohol to keep the red man intoxicated” (“Nature of the Threat”). Guru: “We got 17 million of us, plus 2 million Indians / that makes 19 mill’, lighting shit up like Wild Bill” (“Make ‘Em Pay”). WC: “The same bitch that jacked my forefathers and the Indians took my motherfucking religion” (“My Skin Is My Sin”). Shock-G: “This land once owned by Indians, who then would learn to burn / A tragedy, because from them there was so much to learn” (“Wussup Wit’ the Love”). J. Sands: “Just like they gave smallpox to the Indians they gave us crack cocaine” (“X-Tinction”). K-Rino: “I traveled through millenniums / I saw the pilgrims spread disease, murdering the Indians” (“Time Traveler”). Prodigy: “Fuck Christopher Columbus, the Indians was here first” (“My World Is Empty Without You”). Kilo: “Now you wanna kill me with your AIDS and your crack / I’ll help the Indians take the motherfucker back” (“White Horse”).

With the exception of early ’90s Tommy Boy recording artist Apache, however, black rappers didn’t identify with Native Americans to the point where they would have made certain characteristics part of their image. There’s Cesar Comanche, but his identification pretty much ends with the name. I’d wager that as an icon, the cowboy left a bigger mark on traditional rap music than the red man, Redman the rapper notwithstanding. Maybe that’s a reflection of cowboys being more present in the country’s collective consciousness, maybe it’s because rappers like to carry guns, too. And let’s not forget Mario van Peebles’ ‘The Posse,’ which pretty much legitimized the idea of black cowboys, translated to rap by Tragedy’s theme song for the film, “The Posse (Shoot ‘Em Up).”

Sadat X seemingly went all the way on his debut album “Wild Cowboys” with vintage-style artwork and lyrical references. Curiously enough, he should also be included in the above list with the couplet “This ain’t even his land, the Indians was here first / The savagery displayed made the red man disperse” from the 1990 Brand Nubian song “Drop the Bomb” (another, not so coincidentally political song). Considering the historically documented Black Indians, it seems strange then that this Brand Nubian wanted to be a Wild Cowboy and not a Black Indian.

But it quickly becomes apparent that the wild west theme is only a loose concept here. He opens up the title track admitting that this “wild cowboy never lived on no range / the only prairie I’ve seen is in the library / and the last Indian I’ve seen was headin’ towards Cleveland.” It’s an icebreaker of sorts because the listener now knows that the rapper doesn’t take everything so serious. You get that a lot from Sadat X actually, and shouldn’t expect any different from someone who begins an album with the line “People often see me at jams and be thinkin’ I’m high / No, that just be my lazy eye…”

That is vintage Sadat X, to sprinkle a bit of sarcasm in all directions. As witnessed on that same opener, “The Lump Lump,” where neither of the two sexes is spared. So yes, X is quite the character. His patterns of thought, flow and rhyme make him one of the more unique MC’s. The strident voice would be peculiar enough, and when you add the habit of giving each bar a particular intonation, there’s no denying that “no one in the world got this style of rhymin’.” But because his tone is so conversational and also melodic, it’s pretty easy to get into Sadat. Lyrically, it can be hard to follow him, but that too can be construed as being part of his charm.

To stick out can also be a disadvantage when it comes to creating a traditional, listenable album. Beats go a long way in making a rapper palatable, and in the case of “Wild Cowboys” the producers do their best to provide Sadat X with tailor-made, thumping, atmospheric beats that match his originality and thus take off some of its edges. Highlights include Alamo’s lush premium production for the Grand Puba duet “Open Bar,” Minnesota’s engaging underground rumble for the freaky “Do it Again,” Ant Greene & Father Time’s late night conspiracy meeting “Game’s Sober” with the Money Boss Players, DJ OGee’s delicate piano/drums miniature “Sauce For Birdheads,” Pete Rock’s customary quality beat for “Escape From New York” (featuring his buddy Deda), and Showbiz’ “Stages and Lights,” one of Show’s funkiest productions, done justice by an utterly comfortable Dat X. But the crown is taken by Ali Malek, who makes the best imaginable use of Ennio Morricone on “Hang ‘Em High.” Any other western reference would invariably fail after this ingenious incorporation of “The Good, the Bad and the Ugly.” DV Alias Khrist provides a haunting hook, while X transfers today’s “New York terrority” to the Old West.

As far as rap tracks in a western setting go, “Hang ‘Em High” (accompagnied by a top-notch video) is only rivaled by Kool Moe Dee’s classic “Wild Wild West.” With “Wild Cowboys” Sadat X proved he could hold down not just one but a variety of songs on his own. Lyrically, the genius of this MC doesn’t reveal itself in long quotes, he coasts on his theatrical delivery and surprising disclosures. Like when he quotes himself and then wonders, “Now should I clear myself for samples?” Or when he quips, “I’ve seen groups lip-syncing and fuck THAT up / They live show looks better on the video…” Other rappers get tied up over the topic, Sadat X nails it with a few words: “Freewheeling causes a lot of deaths, wack rappers waste a lot of breaths.”

Unlike most rappers who blindly embark on a solo mission, Sadat X was aware of the task at hand: “My reputation is at stake / this where the men are made.” Money was admittedly a motive, but so was getting ahead in a more general sense. He goes as far as calling “this solo thing […] the most serious thing in my life […] up to this point.” “Move On” is the album’s most ‘conscious’ song, giving a good indication of where Sadat’s head is really at:

“Way back in the beginning
when I was rhymin’ in backyards
while people was playin’ cards
and eatin’ barbecue, I’m one of the only few
that said, ‘Take that pork off ya motherfuckin’ fork!’
Then they would front and turn off the mic
and I’d be out on my bike
[…]
I free them Haitians off them boats and give ’em the finest ocean liners
I hate brothers that’s walkin’ but mentally they in recliners
Hey, who’s that behind us with the plastic and the scanners?
In the year 2000, will you be on your manners?
In the concentration camp, where the floors are cold
and population control keeps your welfare comin’
No more big fams, Uncle Sam jams
and his MC Big Brother want the platinum at yo expense
Niggas is locked and ain’t been heard from since
I walk light and carry the big stick
Give out my views to blacks and Jews and whoever choose to get hit
[…]
My rent is due and the phone bill too
Long distance is dead, got to see Con Ed
All of these bills is risin’ in my head
But wait, I got the child support
got the car note as the afterthought
got the school loan for the college that was blown
Did I forget, with my car a lot of tickets I own
Now dig this hey, my youth, man she constantly grows
always need clothes, hey, that’s how it goes
Word – and my wife, I gotta keep my home life intact
Some of her friends be tryin’ to end me
they call, I answer – they be friendly
That’s that bullshit, yo now that’s that bullshit
Now my crew want money and I’m tellin’ ’em to hang on
while I’m tryin’ to hang but sometimes that don’t be workin’
Niggas talkin’ ’bout gettin’ a package and goin’ down south and murkin’
the Carolinas or the VAs with the stash spot
tryin’ to hit the jackpot, tryin’ to hit the jackpot”

For X, “Wild Cowboys” was a return to the Bronx of sorts. The cowboys on his side (Shawn Black, Cool Chuck, Tec, all featured on the closing “The Hashout”) were from there, as were the Money Boss Players and producers Diamond D, Minnesota, Showbiz, and Buckwild. Without Grand Puba’s artistic and Lord Jamar’s spiritual influence, Sadat X’s creativity and originality ran free, but with the help of Loud’s Matt Life and Schott Free, a certain Mark Da Spark (who I’m still unsure about if he’s identical with producer Mark Sparks) and longtime collaborator Dante Ross X was able to channel his eccentric personality into a strong album.