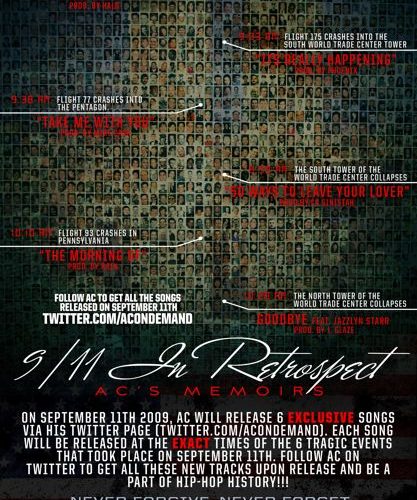 AC’s “New Soul Remix” came my way due to the recommendation of a good friend, and his reinterpretation of the Yael Naim song made famous by an Apple commercial struck me as witty and hip. AC even parodied various Apple promo materials in a Steven Tapia video based on the song. When I got back to my advice giving friend he recommended another AC download for me to check out: “9/11 In Retrospect – AC’s Memoirs.” Even though I went ahead and grabbed the zip file right away (why not the shit was free) I had a hard time with actually unzipping it to listen. To me it swung the pendulum too far in the other direction – I had just gravitated towards AC as a lighthearted, humorous rapper and here he was rapping about one of the most somber and shocking events of my lifetime. Even though after eight years I thought I was over it, the truth is, I’ll never be over it. I stood right in front of the Twin Towers back in 1999, looking up in awe at the brash and bold statement they made not only for New York City but capitalism worldwide. Never did I imagine they’d pancake into a smoldering pile two years later with thousands of innocent people buried underneath. It will haunt me my entire life.

Ultimately that’s the reason after sitting on the zip file for months, I finally decided to unpack “9/11 In Retrospect – AC’s Memoirs.” My feelings can’t even begin to compare to those of the people who lived in or around New York City. I saw the Towers in person once. People there saw them every single day, either from afar in the skyline or up close in person. There’s no question that Staten Island native AC knew those buildings personally like you would know the back of your hand. When the buildings fell I considered whether anybody I knew in NYC would have been in the vicinity. When AC saw them fall he probably though about people he knew personally who worked there, wondering whether or not they got out. I had my own reservations listening to this EP – imagine what AC felt actually writing and recording it. Out of respect for ability to put pen to paper and write out his thoughts, AC deserves that I listen to these six songs, each titled for a specific time on the clock that morning that part of that morning’s tragedy unfolded, starting with “846. Wake Me Up.”

“That day I strolled into class crackin jokes
Smellin like weed, didn’t even have my notes
Most days I just sat up in the back and wrote raps
Not today, I got a call that made me have a stroke
My dude told me that the Trades got hit
by some planes and his wifey was in ’em, but they haven’t spoke
My dad works in Manhattan…

Father finally called, buggin in fact
He seen the first Tower get hit, the other collapsed
To us it was the end of the world
It was so early, we ain’t know none of the facts”

While the song’s sample of “Wake Me Up When September Ends” by Green Day may seem painfully obvious, lead singer Billie Joe Armstrong has always maintained the song was a tribute to his father – who died in September when Armstrong was only ten years old. Since the song was released four years after 9/11 occurred though the coincidence is hard to ignore and certainly wasn’t lost on AC or producer Halo. The next song “903. It’s Really Happening” is the longest of all six songs and the beat is provided by Phoenix. I received a phone call from my friend Ed just minutes after the second plane crashed into the South tower, so this song hits me the hardest.

Through this one song AC connects deeply as he ponders why eight years later it still doesn’t make sense, how four planes were able to be hijacked and aimed at American targets, how it was ever allowed to happen in the first place. The pianos reverberate in the background while AC questions our government with words like “how you knew about the bomb and didn’t defuse it.” When I’ve had conversations with my dad about Pearl Harbor, he says almost exactly the same thing – he thinks someone knew what was going to happen because of which Navy ships were NOT in port at the time of the attack. He may be right, he may be wrong, I’m no conspiracy expert – but when I think about the Twin Towers I realize that it will always be my generation’s Pearl Harbor: a stunning attack on America that came without warning and killed thousands. From there AC moves on to the Mike Cash produced “938. Take Me With You.”

“Yeah – love me when I’m here, love me when I’m gone
Don’t you have no fears, no tears, girl just move on
We’ve been fightin through the storm, I know that through the years
I never made it right like two wrongs, two wrongs
Girl you was my muse, when writin my new songs
I ain’t bother askin you, how you likin that new job
or took notice of your hair, when you lightened it to blonde
Make it right before I’m gone, I’m gone, I’m gone”

And where is AC going? Judging by the militaristic drumroll, he’s either headed to war or headed to the after life – perhaps both. Fitting either way as flight 77 crashed into the Pentagon, so he could be a casualty at the war department that day or a soldier saying goodbye to his lover before deploying to seek revenge. The next song features Paul Simon samples and C4 production and is titled “959. 50 Ways to Leave Your Lover.” That’s when the South tower collapsed. There was only one way to die when that hour and minute struck on the clock, but the ironies of life are still bittersweet in the same way they were when Alanis Morissette first sang about them (and the hook even seems to hint as much). This is followed by AC’s shorted track of the project: “1010. The Morning Of.”

“Shit, this is fuckin great this is nice
I’m already runnin late to the gate
I can’t make and I hate early flights
It’s 8:30 right? I’m not mistaken
Baby check the ticket I’m shavin
Can you make sure I’m right?”

This time around AC is playing the role of a harried traveler getting into a fight with his woman over a phone number stored on his cell. You can guess what flight he’s trying to make it to JFK to catch when it comes in – Flight 93. The closing track is “1028. Goodbye” featuring Jazzlyn Starr – and that’s when the North Tower came crumbling down and the already unimaginable became twice as horrifying.

From a conventional review standpoint, this AC album is technically right in all aspects – well produced beats, well crafted lyrics, compelling stories delivered in a way that paints a portrait in your mind like you’re right there experiencing it all – and maybe that’s why the blood is pounding in my ears right now like a jackhammer. It still runs deep. I think Billie Joe is right – wake me up when September ends, because in many respects it seems like it never did. It gets a little more distant with each passing year, but it will never fade completely. AC’s album is a poignant and painful album, recorded and given away for free with no intent of profit on his part, merely to commemorate the event and show solidarity with those who died during and after the attack. This short and solid EP is a fitting tribute and shows me that AC can indeed be both lighthearted and deadly serious, giving him a greater range as an artist that makes me anticipate future works based on the potential already shown. Holla at AC on Twitter to find out what’s next – that’s where he gave away all six of these songs on 9/11/2009.