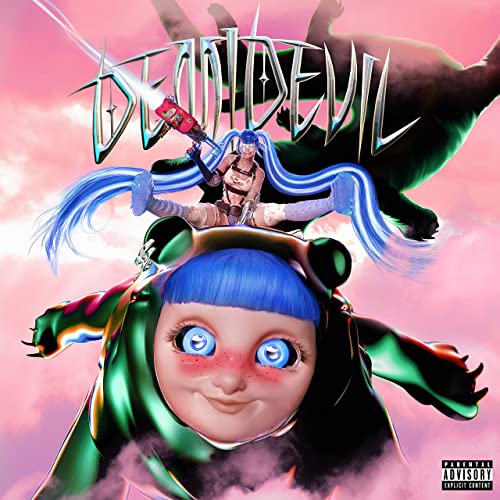 “I’m not shy, I’ll say it/I’ve been picturing you naked”

The CallMeTheKidd producer “Slumber Party” featuring Princess Nokia may explain Ashnikko as well as any track on “DEMIDEVIL.” Four years ago Ashton Nicole Casey began her rise to popularity through free tracks she shared on Soundcloud. Her raunchy AutoTuned raps quickly made her a favorite on TikTok, as the juxtaposition of her frank sexuality and innocent appearance spoke perfectly to a demographic caught between youth and adulthood. “Slumber Party” flexes both Ashnikko’s youth and fluid partner preferences as the same time, vowing to both “play dress up” with someone else’s girlfriend, then go down on her orally. I’m sure somewhere there’s a Christian conservative who finds the whole thing horrifying.

“BITCH!! ARE YOU TRYING TO MAKE ME CRY?” screams the chorus of the obviously titled “Cry” featuring Grimes. Even though Ashnikko is classified as hip-hop and punk, she’s also equally regarded to be bubblegum pop and indie rock, and the song definitely straddles all of those genres. The video itself looks like a cross between Nicki Minaj and Ghost in the Shell, with CGI computer animation and provocative imagery that carefully targets the disposable income of a rebellious teenager. Moments later my wife walked in and said “Why are you listening to Avril Lavigne?” I can see her point given that “L8r Boi” is an unapologetic cover of her smash hit “Sk8er Boi.”

Ashnikko is trying so hard to push buttons it’s comical. “Clitoris! The Musical” finds her explaining “It’s like an arcade game/your hand is the claw/the teddy bear is my orgasm that always falls.” There’s no issue with her taking male partners to task for not providing her pleasure, but it comes across as a calculated ploy to shock, and there’s nothing in her repertoire I didn’t hear from 2 Live Crew records 30 years ago. I suppose that makes it perfect that the majority of the people who enjoy Ashnikko weren’t alive when “Me So Horny” and “Pop That Pussy” were hits.

Before we go any further though I want to note that Ashton has been very vocal about her bisexuality, her LGBTQIA advocacy, and her disdain for the kind of police brutality that sparked massive protests in 2020. While she may wield her musical intentions with the subtlety of a sledgehammer, I can get behind her taking that same sledgehammer to racism and injustice with just as much bravado. I’m probably more of a fan of Ashnikko the person than I am of Ashnikko the artist, at least as far as her major label debut “DEMIDEVIL” goes. It feels like the audio version of Madonna releasing a coffee table art book of her sexual exploits, and I’m not in any way judging you if you get off on that, but it’s just not my thing.