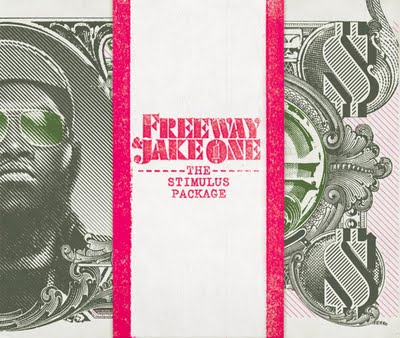 In 2003 Freeway dropped his Roc-A-Fella debut and cemented his position as an artistic powerhouse who fit in with his crew about as fluidly as MC chris at a Mobb Deep show. It wasn’t that Free wasn’t grimy enough, outside of Beanie Sigel the Roc didn’t have anyone grimier, but rather he was an artist who was never destined to make the radio say “play that shit again!” After years of battle rapping his voice and flow had a coarse grain that stripped away any sense of radio friendly melody that might sneak into the passionately terse speed that also came from a background in microphone warfare. It felt more natural to see him side by side with such backpack friendly rappers as Mos Def and Kanye West on “The College Dropout”s “Two Words” than he ever did the Mariah Carey, the all time go-to siren for giving gangster rappers a heart of gold, so it wasn’t really shocking to see how well Freeway faired after the Roc exploded. Dude had been on his own since joining and no Jay Z co-sign was going to change the fact that his grind got him further than his label affiliations ever did.

And so, unlike some of his peers (sup Peedi Peedi?), Free has spent his time since striking out with a steady stream of songs posted on his website, a street record, and signed up with Rhymesayers to release this record right here. Oh and before he’d even dropped this “Stimulus Package” he’d signed a deal with Cash Money to put out future releases. And he’s one of the few Muslim rappers who have made a point of informing his fans he’d made his Hajj to Mecca. These are just details, but they’re details that let you know who Freeway truly is, a deeply spiritual battle rapper who remembers his obligations while still finding time to talk shit about how much money he’s got or how dangerous he is. Or if you want the short hand, dude is fucking complicated.

Which brings us to “The Stimulus Package” – the hands down winner of Album Package of Year (I love that the case looks like a wallet and the liner notes giant ass dollar bills) as well as one of the most satisfying throwback rap releases in recent memory. Unlike so many other rappers who’ve entered their thirties and suddenly think it’s time to figure out what the kids like Free keeps this Package strictly for fans of steady flows that compliment and slide over production. Instead of just shouted choruses that sacrifice lyrical skill for easy cheap hooks. If you’ve ever found yourself muttering about how “these kids these days don’t know shit about real hip hop” this little flash of nostalgia will give you a smile like Christmas morning, even when the subject matter takes a darker turn.

Freeway has always been at his strongest when he’s mined his days of doing dirt, but “Stimulus” interestingly enough finds him looking at the world with the tired eyes of man who’s grown weary of life’s struggle but who refuses to stop fighting. “Money” finds him looking back on his life, from sweeping up hair at the barber shop as a child to drug dealing, and the object that drove him to both lines of work.

By the time his second verse starts he addresses his hustle as an artist and throws a head nod at folks who think a lack of radio hits somehow equals a lack of soul. There’s some sadness with his hunger when he raps “No I’m not Jay but I am on the way, and I’m not Kanye but I can produce heartbreak on 808’s” but it’s a sadness that seems prevalent all over the whole record. After all these years of work Freeway still finds himself talking to his kid on “Free People” about where their financial situation is. Some money, but not enough to protect them from the notions people might hold about a rapper with his history.

“‘Did we make it to the top dad?’
My bad Nah son, we made it to the middle
Getting paid a little
So you know what that means? You can play a little
But I still gotta work a lot, close the locks
They can see me in the two, think I’m worth a lot
But if they try to take you, I’m a merc the block”

On paper these lyrics might not seem like much, but 80% of Freeway’s charm is in the delivery, the way he raps eloquently simple truths and makes it sound like a gruff wordy cipher. “The Stimulus Package” is his least violent effort although from listening to his rhymes it has less to do with the label that’s releasing it than it does the tempering effect of creating a realistic record full of grown man shit. Let these kids talk about endless paper, Freeway’s rapping for the cats that feel the sting of the recession and look back at their younger days of getting money by any means necessary with equal parts envy and disgust. When paired with Jake One’s beats the street wisdom transcends perceptions and molds a kind of latter-day soul record, much the same way Ghostface Killah and Rza’s partnership has re-crafted Tony Starks as Clarence Carter with a Glock.

Jake knows Freeway’s strengths and plays to them with so much grace it’s almost unfair to rappers who’ve got to piece records together with a hodgepodge of producers who craft their tracks with no one in particular in mind. Even the most simplistic of beats, take for example “One Foot In,” blends blues and soul bones with steady pounding drums and flavorful turntable accents. “The Stimulus Package” is a very gangsta album. The production gives Freeway the swagger of Frank White even while he’s unloading his soul like he’s at confession. It’s gangsta for grown folks, at least until someone’s kid brother steals the package thinking it’s some kind of special edition Supreme wallet and the youngster figures out what he’s been missing while Souja Boy’s telling em. This is one time I don’t think people will mind the petty theft; these riches need to be shared.