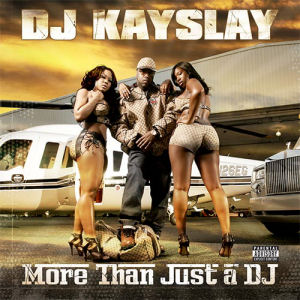 For most people, DJ KaySlay is one in a long line of New York based deejays known for breaking the newest records and screaming over the tracks. Think about it, there’s Fatman Scoop, Funkmaster Flex, and DJ Clue among many others. Each of these deejays have all had their own time in the limelight, but Kay wants to be known for more than just that. Although the graffiti legend and self-proclaimed mixtape king is the #1 DJ on New York’s premier hip-hop station, Hot 97, Slay also runs “Straight Stuntin Magazine”. After releasing a slew of Streetsweeper mixtapes, Slay’s first retail album, “The Streetsweeper Vol. 1” dropped in 2003. He followed with “Volume 2” in 2004 and is now back to show that he is in fact “More Than Just a DJ”.

Just like his prior releases, KaySlay shows how much clout he has in the industry by pairing the hottest artists in hip-hop with the dopest producers. This time around, the Drama King enlists the services of artists like Tony Yayo, Papoose, Lloyd Banks, Jim Jones, Yo Gotti, Bun-B, Twista, Cam’ron, Raekwon, Ghostface Killah, Joell Ortiz, Sheek Louch, Styles P, Rick Ross and many others. The production is handed by The Dream Team, The Alchemist, Ty Fyffe, Amadeus, Street Radio, Arab Music, Tie Stick, GQ Beats, Green Lantern, E-Dubb (not me, btw), and Money Always.

The album opens with a promising intro produced by Ty Fyffe and showcasing Busta Rhymes’ staccato flow that seems to go all around the world before eventually getting to the rhyme, but in a good way. “Men Of Respect” features Jim Jones, Tony Yayo, Lloyd Banks and long time KaySlay protege, Papoose. The verses are decent, but I just can’t get into the hook of the song, crooned by Rell. The first single is the Street Radio-produced “Blockstars”, and features Yo Gotti, Jim Jones, and Busta Rhymes, with Ray J on the hook. While it’s not quite the Dipset reunion that many people hoped for, Jim and Cam’ron are on the same album as Killa appears on the next song with his homie Vado, the Arab Music-produced, “Monster Music”. Some of the album’s slickest production comes on the GQ Beats-produced “Gangsta Shit”. It features Yo Gotti, Papoose, OJ Da Juiceman (Aye!). While the song is decent for what it is, the hook can be rather annoying, as it is basically comprised of OJ’s “Aye, aye, aye, okay” that he is known for. Trick Trick, M.O.P. and Trae The Truth ride together on “Let’s Ryde Together”. The hook here is provided by Tre Williams, who sounds a little bit (ok, a lot of bit) like Anthony Hamilton.

The second half of the album kicks off with the Luther Vandross-sampling “Thug Luv”, which features Maino, Papoose, Red Cafe and Ray J on the hook. Papa Wu goes off on a tangent about putting an end to drama in 2010 before the Green Lantern-produced “See The Light”, which places the legendary AZ on the same track with Raekwon and Ghostface. In fact, many of the songs on the second half of the disc are a bit darker production-wise and feature lower-profile artists like Saigon and Joell Ortiz on “God Forgive Me”, as Ortiz raps:

“(Are you) joking? Did someone pump you with laughing gas?
Every night I have a glass and celebrate bustin’ a rappers ass
(Are you) even listening to what these critics say? Or
(Are you) just fans of the same shit, different day? Or
(Are you) plain ol’ mad I rock with the nigga Slay
And the shit I say is so muthafuckin’ Brooklyn like Big and Jay
(Are you) niggas crazy or y’all just buggin’ out?
(Are you) still tryin’ to convince us you what a thug about?
(Are you) aware that the only thing you run is mouth
And who I run with, will run up in your mother’s house, unannounced”

On almost every other song, someone finds a way to work in the “Slay him with the K” line or some variation of it. Kanye West originated the line on his remix to “Can’t Tell Me Nothing” from his “Graduation” album. It’s only fitting that his voice was sampled for “Kay Slayed ‘Em” which features Uncle Murdah, Mistah FAB and Grafh. The remix of “You Heard Of Us” with Styles P and Sheek Louch has a medieval sound to it. If you’re old enough to remember the opening of Lord Tariq and Peter Gunz’s “Deja Vu (Uptown Baby)”, then you should have an idea of how the track goes. “Street Creditability” and the remix of “Blockstars” bring the album to a close. The former features San Quinn, Big Rich & Hood Stars paying tribute to the Bay area.

Clocking in at just under seventy minutes, there’s a lot of music to go around here, and should be enough to satisfy most fans of the artists and KaySlay. The production is varied but in most situation the right artists are on tracks that compliment their flows so it all works out. I wasn’t overwhelmed with many of the hooks though, and while it’s nice to know that Nicole Wray is still alive and kicking, I think she’s better suited to be on her own songs. Some of the album’s memorable appearances come from Busta Rhymes, M.O.P., Bun-B, and Papoose. I guess that being on 25% of the album’s tracks will make at least one or two of your appearances stand out. Pap is featured on five tracks.Overall, it’s a decent listen with nice bump factor, and while KaySlay may be more than just a DJ, he can still put together an exceptional long play from time to time.