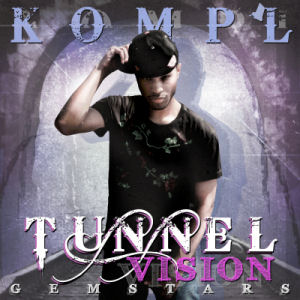 A sense of style and a sense of passion lives through a solid rapper. NY’s Divine “Komp’l Thomas has lived and breathed hip hop ever since he was young. Komp’l was fortunate enough to catch a break in a private show at the ever-so-popular Apollo Theater and caught the attention of Melle Mel and Afrika Bambaataa. With the support of friends and family, Komp’l only grew in his career through the years while taking into consideration his love for individuality and fashion. With this in mind, Komp’l has been featured in a Japanese Magazine for his fashion sense and fresh new look.

Komp’l debuts with a fourteen track mixtape and features production from Gemstars producers Marv, Bobby, and Majestic. After long hours, countless re-recording of tracks, and cooperation from the whole team, “Tunnel Vision” attempts to defy the rules of hip hop and make an impression on the music industry. With his skills and production, Komp’l ensures his music “has the power to bump in the club as well as appeal to true hip hop fans because of the wordplay.”

Throughout “Tunnel Vision,” Komp’l remains introspective while constantly attempting to validate his existence as an artist in the hip hop realm. As with many artists getting their start in the rap game, Komp’l spends a majority of his album displaying his skills and challenging his competition. With its funk beat, “So Cold” calls out to the opposition as Komp’l shows that his skills are not to be taken for granted. Chilling chimes and sythns flourish through “We Focus” as Komp’l shows his intent of working hard regardless if haters try to distract him. A hard bass hits in “Dat Boom Clap” as Komp’l shows how his team is unmatched and disregards all haters. Although the beat and rhymes are skillful, I can’t help but focus on Komp’l’s attempt to make sound effects with “boom” and “clap” on the hook as it was slightly distracting and amateur.

However, Komp’l definitely has his mind set in the right direction in terms of his career and music. He remains positive and hopeful through his experience as he reflects on his career as an artist. In “I Jog,” Komp’l sends out a clear message about taking his time to reach the top while others race to gain fame and shows his true dedication for the music. Here, Komp’l speeds up his rhymes, but at times seems difficult to comprehend. Also, Komp’l makes reference to different cartoon characters throughout the track with seems unmethodical.

“Objective” and “More Than Jus a Dream” unveils how Komp’l strives to rise up as an artist as well as helping his family in the process. Komp’l reminds us that his dream is attainable with hard work and dedication as he says:

In the last track Komp’l blows us away with the “Thinkin’ Process” as it provides insight on what goes on inside his mind during this whole process of building his name. As the most introspective track on “Tunnel Vision,” Komp’l shows his vulnerability and openness to grow as an artist. He displays his appreciation for the art and willingness to work hard to achieve greatness.

The dedication and hope is definitely apparent within Komp’l as displayed in “Tunnel Vision.” Although he spends a good amount of time redeeming himself to his competition, untested artists tend to follow this trend of living up to everyone’s expectations. However, Komp’l provides some insight into his character, style, and potential as his rhymes remain creative. With some fine-tuning, the potential for excellence is endless. It’s evident that the passion within Komp’l and the yearning for success is the make of a true hip hop artist who will definitely reach great heights.