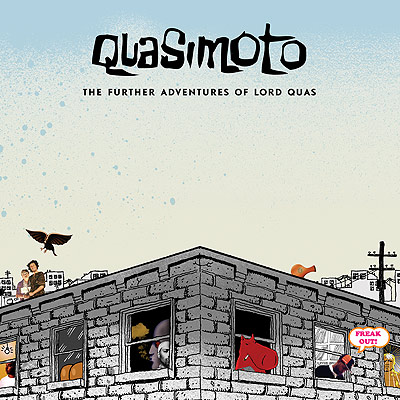 Madlib is fucked up. Depending on your point of view that’s either a diss or a compliment. Known as something of an eccentric hip-hop jack of all trades, his beats can be compared in both dopeness and weirdness to Prince Paul and KutMasta Kurt; while lyrically he ranges all over the map from Kool Keith to MF Doom to Aceyalone. Born Otis Jackson in Oxnard, California, Madlib grew up in the unlikeliest of places to become a legendary hip-hop producer – a beachcombers paradise. Then again if any of that Humboldt County sticky green made it’s way to Oxnard along with the beach bums and “party dudes,” maybe the biggest influences of Madlib careers were more highs than Napa Valley.

Whatever made Madlib definitely made him madder than the Mad Hatter, a musical mad genius both in front of and behind the boards. From his early work with Lootpack to the success of “Angles Without Edges” to the critical acclaim of rap heads and music snobs alike on his MF Doom collaboration “Madvillainy,” Madlib has certainly seen and done it all. And yet for someone as creative and energetic as Madlib, enough is never enough. Like the aforementioned Kool Keith, Madlib finds himself unable to get out all of his musical output without creating some alter egoes and personas along the way. As Dr. Octagon is to Kool Keith, Quasimoto is to Madlib. Under the Quasimoto guise, Madlib gives the maddest and most eccentric parts of his creativity free reign, all while rapping in a sped-up voice that makes the artist sound like he’s getting his buzz by sucking the nozzle of a helium tank.

After releasing “The Unseen” in 2000 and a three-song vinyl-only “Astronaut” EP in 2002, many may have mistakenly believed that Quasimoto was a side project the increasingly busy Madlib had altogether abandoned. 2005’s “The Further Adventures of Lord Quas” proves that to not be the case, as the acclaimed eccentric gets even more spaced out on this 26 track release. There aren’t many guests to speak of throughout the album, which means most of the madness is Madlib’s own, although his Madvillain cohort MF Doom shows up on “Closer” and Medaphaor guests on “The Exclusive.” Other than that though you’re on your own trying to figure out what exactly Quasimoto is getting at with songs like “Civilization Day”:

“Today you have to stay on your toes
When you’re walkin the streets and stalkin the sheets stay on the low
Go to the wrong territory and get blown, blown
Some brotha’s ain’t even knowin, knowin
Revelations are is on it’s way like ya next spliff
So get your mental uplift while we shootin the gift
Black magic chants
[…]
Look around take a glance, we must be born to die
We must be born to die”

That may seem straightforward enough at first glance, but the song is punctuated with samples that could be from news broadcasts, radio plays, sci-fi TV shows or government propoganda films. “Classified, ultra-secret, Air Force to generals only. At ease men! Take your seats. At ease men, this is General Gohart. If you are viewing this, then we are under extra-terrestrial attack.” Huh? What? None of it has absolutely anything to do with anything else, and probably only makes some sort of twisted sense in the mind of Madlib. The more bugged out and type nice the beats are on tracks like “Bartender Say” and “The Clown” the weirder the content in the songs gets. It’s only on the rare moments Madlib reveals his true unenhanced vocals, on songs like “Raw Addict Pt. 2,” that you get a true insight into his mindstate:

“You know how it goes
Really, really y’all know how it goes
Music takin over your body
Beat takin over your soul
I be passin up parties, quit parties
But never passin a bowl
Pass me that weed
Psychedelic record covers
Jazz standards
Funk soul, that’s a choir
Eletronic patterns
It’s the raw addict
My A is tape comfort over ill record static
Oh, oh, oh addict
Y’all better scram like I’m Broadway Sam”

Depending on how well equipped you are to deal with Madlib’s self-indulgent musical mental acid trip, “The Further Adventures of Lord Quas” will either be a success or a failure. Musically the adventure is pleasant because no matter how bugged out things get the choice combinations of loops, samples, electronics and drums prove Madlib continues to be a maestro in his chosen field. The raps of his alter ego Quasimoto though can be hard to deal with. While they often make more sense than the overly scatalogical Kool Keith alter egoes, they are actually less tolerable due to the chosen gimmick of the sped-up, high pitched voice. If Madlib did this same record entirely as himself, it could be hailed on the same level as some of his previous projects. In the end this is only recommended for his die-hard fans, or those who had already heard and liked the Quas persona. Even if the raps are dope, the way they’re presented is not. Newcomers will enjoy the beats but otherwise be left bewildered.