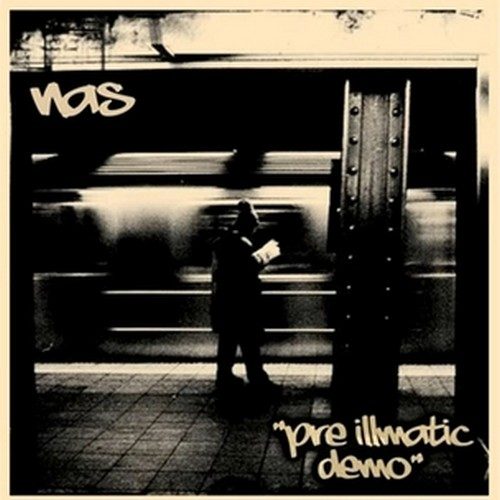 The Nas “Pre-Illmatic Mixtape” â€“ well, that’s what people have dubbed it, anyway… Others call it “The Demo” or “The Radio Rips.” I just call it one of the most fascinating things I’ve ever heard. It “fell into my lap” about five or six years ago, now. I can’t even remember how, to be honest, as it certainly wasn’t recommended to me (I guess it was written â€“ sorry). The premise: the collection of songs that Nas recorded BEFORE “Illmatic” was released. However, this has since evolved into “The Demo” that Nas sent around in order to get a deal (technically, this can’t quite be true of every song, as we’ll find out later). There are ten songs, mostly sounding as if ripped from cassette, with various quirks, kinks and cuts â€“ so if you’re expecting some sort of glistening modern day product, think again. This is RAW. Crucially, the content is much more relevant than the package and anyone that loves “Illmatic” but hasn’t heard this, well your world is about to be rocked.

It kicks off with “Just Another Day in the Projects” â€“ a stunning organic breakbeat invites you in, a primary piano roll combines with the bass, and then: “I had a dream I was a gangster, drinking Moets, holding tecs/Making sure the cash is correct…” WTF? I thought this was the PRE-Illmatic shit. How come “N.Y. State of Mind” is on some unfamiliar beat? Well, as you will discover throughout the course of the ten songs, Nas cut and pasted some of his best lines from the original demo track, eventually morphing them into the finished “Illmatic” sessions. So even though after three minutes, you realise that “Just Another Day” is truly dope but kind of old school compared to what we know, it clearly gives birth to the superior “N.Y. State of Mind.” This gives further credence to the reports that “Illmatic” was very carefully “pieced together” by an eclectic (but genial) team, whether that was musically or, in this case, helping Nas to step up a few levels lyrically. As many rappers out there know, sometimes you revisit an idea that was clever a few years ago, but at the time you didn’t necessarily have the skill or experience to exploit the potential of it fully. Here we witness the origin, the source of songs or ideas that have since evolved into legend.

We then head into a more familiar stretch, consisting of “Live at the BBQ” and “Back to the Grill” â€“ two songs that helped launch Nas into the regional and national consciousness, or at the very least get hip hop heads excited about the new kid on the block that “went to Hell for snuffin’ Jesus.” They are also songs by other more established artists that simply feature Nas as a guest, but amazing to hear that a seventeen year old studio Nas sounds so similar to the present day version, which isn’t always the case. “Everything is Real” is a more fully formed offering, and the shit is banging.

“I’m a Villain” is another standout for a couple of reasons. It starts off with another “N.Y. State of Mind” precursor: “I’m the nigga walking with his finger on the trigger/Make enough figures until my pockets get bigger…” The instrumental is locked on at a much quicker tempo, though. If “N.Y.” is at 84bpm, then this is more like 101bpm (more of this later). So his lyrics are generally simpler, but contain nuggets of descriptive genius that were to be slowed down and expanded upon at a later date. Genius lies in the smallest of details, after all. The other nice touch is that this seems to have been recorded using a handheld mic alongside a DJ, who then cuts and blends in (a bit sloppily) the “Can’t You See” instrumental for a few bars. It makes you realise that, just as we all do or did, Nas was a young MC that could spit fire as his mate spun vinyl. Believe me, I’ve been there and it is just the purest of joys. “I’m A Villain” also contains lyrics that ended up being used in “Represent” including “When I dress, it’s never nothing less than Guess… I love committing sins and my friends sell crack.” He already sounds hungry and focussed, but the improvement from rapper to half-man, half-amazing is what many will find jaw-dropping.

That is particularly evident on “Nas Will Prevail” â€“ the original incarnation of “It Ain’t Hard to Tell.” “Prevail” is brilliant as a standalone song, and uses the “Human Nature” loop subtly and intelligently. Nas spits many of the same lyrics, but it is his drastic improvement in how he ARRANGES those same words that makes the difference. Before, on “Prevail,” he sounds like an impressive young pro that is kicking a familiar rap, just better than his peers. On “It Ain’t Hard to Tell” you suddenly realise that he actually INVENTED that brand new â€“ and unbelievable â€“ flow. That’s why he will always be revered as a pioneer of hip hop, he stepped up his flow within himself â€“ like fossils, these songs provide as much evidence as our interpretations allow.

There is the disappointing inclusion of “Number One with a Bullet” alongside Kool G. Rap â€“ the Massive Attack-style beat is fantastic but the flows are too languid. But “Understanding,” featuring a solid appearance from AZ, sounds somewhat like the latter stages of “It Was Written,” with Nas sounding supremely confident. This is even more apparent on the superb “Life Is Like A Dice Game” – which is inexplicably cut short after a sing-song chorus and one outstanding verse. The instrumental is lush, and there are a couple of joints here that potentially could have slotted into “Illmatic” itself (particularly the last song on this collection). But actually, “Dice Game” was almost certainly recorded AFTER “Illmatic” was released… He references Destiny, his daughter, already having been born â€“ if she was born in 1994, and “Illmatic” had already finished recording sessions in 1993, we can call it “Post-Illmatic”. Interestingly enough â€“ and this is a more technical point for all you producers, DJ’s and rappers out there â€“ the first half of this collection ranges from 101-106bpm every time, whereas the second half from 88-95bpm. Aside from the Kool G Rap collabo, the slower tempo songs invariably suit Nas better, with him sounding much more comfortable and locked on to the beat/flow. It also allows him to express himself more densely, and, with the exception of the particularly laid back “One Time 4 Your Mind,” all of the other tracks on “Illmatic” range from 84-93bpm, an extremely narrow range that clearly makes the most of his abilities.

Many have continually wondered just how “Illmatic” could have been so good, let alone a debut, essentially recorded by a teenager. This collection of songs genuinely goes along way to providing, if not definitive answers, then at least vital clues and assists. Listening to “Just Another Day in the Projects” and “I’m A Villain” helps to give ideas about how Nas made the quantum leap from “Live at the BBQ” to “N.Y. State of Mind.” The scarily good closer “DÃ©jÃ  Vu” didn’t even make the album, yet contains a verse that ended up a couple of years later on Raekwon’s “Only Built 4 Cuban Linx” album, as the opening salvo of “Verbal Intercourse” â€“ and is what many consider to be the greatest sixteen bars in the history of hip hop. Last week, I re-read Paolo Coelho’s “The Alchemist” for the umpteenth time, after an imperceptible gap of over three years. What Nas does between recording these “demo” songs and laying down the final version of “Illmatic” is alchemy, in a sense. He concentrates and focuses on one thing, and one thing only, until he is able to improve and master it. He constantly refines it and, through giving it his full attention, is able to turn it into pure gold. Just like Santiago, just like the Alchemist himself, Nas didn’t MAKE “Illmatic” â€“ he BECAME “Illmatic.” It’s a heady mix of talent, dedication, hard work and luck, not to mention pure love for what he was doing. Probably a million other things too… That’s why albums like that are such rare occurrences. And that’s why this “Pre-Illmatic” collection is so endlessly fascinating.