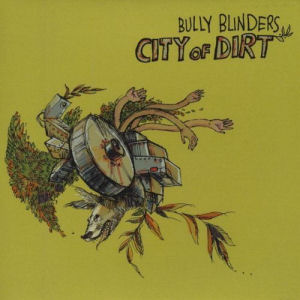 Bully Blinders consider themselves an “American alternative hip-hop group.” Consisting of William Talls on the mic and Chad Tuthill on bass, the duo represents San Diego, California through their unique brand of hip-hop. Though they boast having an “unpolished and raw sound,” the production on “City of Dirt” is conventional hip-hop production. The live instrumentation mixed into the beats give the album a more organic feel, but the beats are nothing otherworldly. Talls handles the emceeing exclusively and provides us with standard flows. The “alternative” element of the group comes into play when one listens to their music and realizes their unconventional topic matter.

From the jump, Blinders hit you with songs dedicated to concepts one would never expect on a hip-hop album. “The Spirit of John Dewey” starts things off and finds the emcee spilling his social and psychological views through stream of consciousness flows:

“I’m wearing the expression of a stranded traveler
Watching the last quest through the station, then it occurred
That every oil company has gone out of business
You’re taking this much better than I imagined or expected
TV journalists read scripts, halfway down the page
The kindness crusaders, inventors of electric age
Set the stage aside for the future parades
While the grown ups rig croquet games and serve lemonade
Prehistoric human traffic, two hundred sixty two bones
Tissues, ligaments, and a slight touch of magic
Hydraulic lifts, moving vans, buses, semi rigs
Ready for the pick up and dump into the lost abyss
Talons, tusks, claws, scales, feathers, fins, fur, flesh
H2O evaporates until we have none left
The spirit of John Dewey, somewhere in the void, yes
Learn by doing late, missed my appointment
Intellect, department store mannequins never rest
But do they? When the lights go out with no vision
Aristotle sorts and organizes with the 1.7 million species
of plants, animals, and microorganisms
Brown, Grizzly, Kodiak, American Black bear
Adapted to a range of habitats that’s out there
Flexible trunks, weighing up to seven tons
Handsome trunks, the largest land mammal, only hunted by us”

Your guess is as good as mine as to the overarching philosophical and social theories espoused by Blinders. Outside of an obvious disdain for the hunting of elephants, or elephant/bear mutants, much of Talls’ rap verses consist of abstract and esoteric phrases that are hard to decipher. “Aim Low Kid” presents a much clearer vision from the emcee as he expresses his displeasure with the current school system and parents. His perceived belief is that the current system leads to underachievement and lack of motivation in kids. “Continental Breakfast” is even more direct in its message as it is literally an ode to cereals and breakfast. While anthems dedicated to the ordinary have been successful before, Del’s “If You Must” comes to mind, “Continental Breakfast” takes the concept to the extreme. “Truck Stop Food” finds more success as the Blinders give us a look into the lives of artists and all the trials and tribulations they face. “30 Feet Above Dirt” finds the Blinders’ creative groove as they present the concept of escaping from everyday life through the idea of having a tree house as an adult.

Musically “City of Dirt” maintains a solid vibe throughout. The Kneehighs (Talls other group) handles bass and beats and help on the production as well. The album is held down by simple, but effective, drum patterns that maintain a consistent mellow tempo from track to track. The duo avoids boring and repetitious beats through their use of catchy samples. “The Spirit of John Dewey” finds the group pairing a joyful organ with a funky bass line for a very catchy beat. “The Charlie Sheen Theme” finds a celebratory horn section holding down the song. “You Only Want to Hear What You Want to Hear” finds the duo sampling some bluesy pianos for one of their more subdued musical numbers on the album. Though the formula is simple, the samples tend to give the album the energy it needs.

Overall “City of Dirt” is a mixed bag. The production is above average, but not without it’s limitations. Talls’ emceeing will make or break this project for you. On the one hand, when the man is on his game he makes for some unique and enjoyable songs. At other times, the emcee sounds lost and rather average. The subject matter is also extremely hit or miss. Were Talls particularly gifted as an emcee, his charisma alone might infuse life into some rather ordinary themes, but given his rather plain emceeing most of the songs will not connect with a larger audience. Bully Blinders shows promise as a group, but their sound needs refinement before it gains universal appeal.