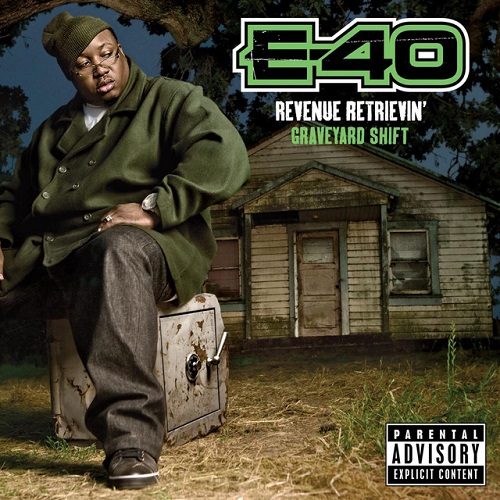 The “Revenue Retrievin” series of 2010 and 2011 are sure to get a special mention in future career write-ups of E-40, noted as a testament to the artist’s legendary ‘grit and grind’ even in an era of declining sales. But even when one is inclined to agree that if one rapper is entitled to put out that much product within a year’s span it is E-40 with his level of excellence, there’s no way around a critical assessment of such a hustle turned bustle. Was it worth it? Did it amount to more than four interchangeable discs filled with the type of songs the artist already recorded many times over?

Comparing the albums among themselves, it may seem like the only difference between last year’s “Day” and “Night Shift” and this year’s “Overtime” and “Graveyard Shift” is that the latter each comprise one song more. Overlooking all 78 tracks (no intros, no skits), “Night” probably has the most duds, while “Graveyard” is the one most true to its title, with major parts of the album engulfed in a dark ambiance.

Opener “Barbarian” puts any rapper likening himself to a gorilla to shame, 40 declaring, “The Bay made me a beast” over an old-time Hollywood gumshoe groove updated with nuff knock. On the title track (the only one in the series) dominant drums and strategically placed keys create a stark atmosphere. The mood turns even darker on “My Lil Grimey Nigga,” a chilling description of the younger generation that has taken over the streets where producer Droop-E lets a hollow bassline hover above the track and Stresmatic delivers a suitably sinister chorus.

Bosko lays down an ominous score for “Spooky,” while 40 provides the personel (“Hard drugs, young knuckleheads and thugs / fake identification, gettin’ kicked out of clubs”), painting an “eerie and grim” picture of the Bay Area. “Takin ‘Em Back” is that old school sound Too $hort might want to visit again some time. Although sneaking up stealthily, “43” is a suprisingly harmonious experience, not just by way of its jazzy bassline and horn flares, but also because E-40 and B-Legit stand as one of rap music’s most outstanding complementary tag teams.

Other mortuary tunes include “Back & Forth” with its menacing mechanical bassline, the live-wired, slow-paced Jelly Roll production “Fried,” the appropriately abrasive “The Streets Don’t Love Nobody,” and last but not least the epic DJ Toure-produced “Don’t Try This at Home” that really seems to add additional fuel to 40’s fire. Even the more melodic offerings tend to carry a somber mood, such as the touching jail theme “Trapped,” or “Serious,” produced by and featuring (an untuned) T-Pain, which chronicles the journey from born loser to self-made man, undoubtely inspired by E-40’s own biography. But he doesn’t content himself with rehashing his success story. Earl Stevens applies an everyman approach throughout “Revenue Retrievin’,” and specifically “Graveyard Shift.” In tune with the overall sound, there is also a cautionary tone to a lot of the songs here. Still not all hope is lost when you have an O.G. like E-40 giving up game on tracks like “Concrete.”

A lot of rappers demand respect. Not quite as many command it. E-40 is one of those who command respect, with his originality, talent, longevity, etc. All four volumes of “Revenue Retrievin'” once again make that abundantly clear. He’s bound by his genre and he’s not one to experiment, but within those constraints he’s a classic MC who covers plenty of bases from bragging and boasting to introspection, storytelling to acute snapshots like “At 4 AM in the morning anything goes / the poor smoke crack, the rich powder they nose.”

The biggest feat 40 achieves with the “Revenue Retrievin'” tetralogy is that he still supplies his discography with songs equal to his best material. While most rappers of his generation eventually are over the hill, the compilation of ‘The Best of E-40’ is not a closed case yet. Like the other volumes, “Graveyard Shift” suffers from inferior rap cameos (exceptions: Tech N9ne on “Fried” and Slim Thug and Bun B on “That Candy Paint”), repetitive hooks (one of the worst plagues to befall rap music) and too much trap talk. But like “Day Shift,” “Night Shift” and “Overtime Shift,” it contains a good number of great rap tracks.