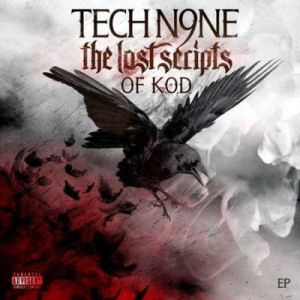 Given the usual creative process that goes into making the average rap album, a project like “The Lost Scripts of K.O.D.” is quite rare. The average rapper records a TON of songs for any given album and chooses the ones he feels will sell best. That usually leaves them at least an album’s worth of material to spread across numerous promotional mixtapes, iTunes bonus tracks, and the occasional bonus CD, soundtrack, or compilation. In fact, many times the best material is found in places other than the actual album. Tech N9ne is not your average rapper, especially not creatively. While the man does produce a large amount of music, most recently dropping a double album with “Killer,” his creative process is much more focused than most rappers. Outside of one or two bonus tracks given to his pre-order fans, Tech rarely has an overabundance of left over material from any album. His music has purpose and his creative process reflects that. “The Lost Scripts of K.O.D.” represents a concept that Tech N9ne felt wasn’t quite complete and decided to address with a follow up E.P. to his “K.O.D.” album. The E.P., exclusively available online at his store, contains 5 songs that capture the same vibe of his “K.O.D.” album.

The album kicks off with “Like I Died (Remix),” which remixes a song originally found on the 2009 Strange Music Sampler. The song captures the dark vibe of K.O.D. as Tech N9ne declares:

“Play the music like I died, to the DJ
Like the Nina ain’t alive, hit the replay
Like I took a long ride, to my d-day
Everybody love my music and the whole world cry”

The beat is a pounding, club worthy, number that is appropriate for the dark, but celebratory anthem. “Stress Relief” follows and takes the darkness to another level:

“Who you talking to?
What you wanna do?
What the hell you thinking?
Who the fuck are you?
Where the fucking money?
I’ma beat your ass
What’s so fucking funny?
Nigga, I’ma need more cash
Why you trying to play me?
I’m stomp you until you delirious
You niggas must be crazy, are you fucking serious?
Fuck this god damn job, you know what? I quit!
I’m ready to go in on, you lying son of a bitch
You don’t know shit, gon’ get your dome split
Stop moving slow trick! Go Bitch!
I don’t give a damn, I don’t want to hear it, which one of them did it, nigga?
Why you shake and shiver? Pull the fucking trigger!”

The song is far from Tech N9ne’s most lyrical affair, but it definitely captures the angry, fight music vibe he was going for. The overly aggressive chorus might be a bit much for some, but overall the song is a success. The following track might be the one track that does not fit the album. “00N9NA” is a two and a half minute track that sounds a incomplete. The concept is dope, Tech N9ne compares his rap star lifestyle to that of a covert agent, but the vibe is a little too light for the EP and the song ends too quickly. “Pain Killer” picks up where “Stress Relief” left off with Tech N9ne presenting a dark and depressing look into addiction and the emotions that can lead to it. The album ends strongly with “Last Sad Song,” where Tech best explains why he felt the need to release this E.P.:

“Y’all know my mother’s sickness
Y’all know I’m breaking down
Y’all know in my circle the devil steady making rounds
Y’all know I’m missing my children because I’m shaking towns
And y’all love my music and how sad I can make it sound
I’m the darkness so low, I’m under the carpet
Whoever wants me to bark at you motherfuckers is heartless
You want me stuck with hardships, want an unhappy artist
But I’ma break apart from this K.O.D. shit regardless
Of who’s mad, a lot of my shit is too sad
Like the death of Michael Jackson, motherfucker who’s bad?
Should jump right up out of myself, this shit so bad for my health
The darkness is selling, but I really want to put y’all some light on the shelf
Will you still be? Able to feel me?
Even if I’m not talking about trying to kill me?
The King of Darkness can no longer conceal me
This could be my last sad song, hoping it will be”

As an extension of K.O.D., this EP maintains the dark vibe of the LP, save for one out of place track. “Pain Killer” and “Last Sad Song” are the highlights of the EP and definitely should have found a place on the original K.O.D. “Like I Died (Remix)” and “Stress Relief” are solid tracks, but not anything that feels essential. Overall, it’s a solid EP with some songs any Tech N9ne fan should check out. It’s nowhere near as solid as the album, but it does a great job of letting Tech N9ne get the darkness out of system and giving his fans something to hold them over until his next project.