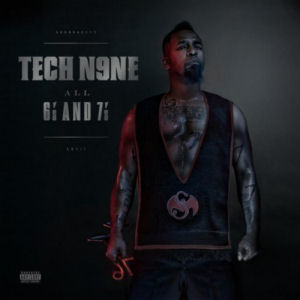 Tech N9ne believes in making high quality hip-hop, but he also believes in shrouding it in an air of mystery and confusion. Sometime even the obvious explanations from the auteur himself are subterfuge to disguise the hidden layers of meaning to his music. Even the album titles that N9ne uses can be interpreted multiple ways, such as his latest missive “All 6’s and 7’s.” At its most basic level the title seems to poke fun at his numerological nom de plume. On a more subtle level it suggests a reframing of the world through rose colored tints – there are certainly more 6’s and 7’s in the world than 9’s and 10’s. And still there’s yet another layer to the story, as Tech N9ne himself suggests the meaning to be “a state of confusion or disarray.” Now you can take it as any of the above, or you can take it as ALL of the above, but no matter how you take it he’ll take you on a strange journey to a “Strangeland.”

“Am I in the Twilight Zone? Cause my mic’s on
But I never thought the world would buy my songs
Cause in my lane I am the highlight inside my dome
but now it’s my height, they try bite, cause my life long
In this hip-hop, everybody’s lip drops
When I spit the gift that quickly shifted cause I get props
It’s terrific; they recognizin me on every level if you missed it
If you look you findin me on the very rebel, this is listed
‘Tech N9ne, a insane man’
His own lane had the strain and pain, and that became fans
When all the dames glance, he’s doin the rain dance
Because the whole world is ’bout to be a Strangeland”

The mellow J.U.S.T.I.C.E. League instrumental allows the always versatile N9ne to get personal, bringing us quite literally into his world where doubt and fear were overcome by his artistic success. That has long been part and parcel of N9ne’s appeal – there’s very little of himself hidden from his audience. In joy you share his endorphins, and in pain you share his tears, but you always connect with N9ne on an emotional level – that is if you’re not too busy moshing to the music. Even the high energy head bop is a response though, which is reflected in the official lead single produced by Seven titled “He’s a Mental Giant.” Tech shows off a tongue that at times is quicker than Twista while letting the pounding backdrop bop your head so hard that it might snap off your neck:

“Hey! I’m lookin down on you niggaz
Even though I’m five-eight and 195 pound on you niggaz
So tall I can’t even hear any of the sound you deliver
Me and my partners never see any of the hateful frownin you give us
Cause we smile at the bitty braggin whack rappers
You happen to be the best at the gat master
But down to the simple fact here’s a strap past to
blast at ya, that’s after
the yappin put him in the casket in my last chapter
That’s laughter”

The Tecca-Nina’s flow is so strong he really doesn’t need any guest stars to rock with him, even on an album that’s well over an hour long with 20+ songs. Nevertheless there are a few that can be found on “All 6’s and 7’s,” including the over-the-top posse cut “Worldwide Choppers” featuring everyone from Busta Rhymes to Twista to Yelawolf. If you never thought N9ne would be down with the Auto-Tune sound, “Fuck Food” is out to prove you wrong as Krizz Kaliko, Lil Wayne and T-Pain join in the “ladies are edible treats” theme. Yes – that’s another part of N9ne he shamelessly shares with his fans – his urges for sexual gratification. It’s a part of adult life so why pretend it doesn’t exist? “I’m a nasty motherfucker/yeah, I eat that pussy like the Last Supper” quips Weezy, and provided you’re part of the adult audience N9ne’s albums are meant for it’s both raunchy and funny. The same can be said of “Pornographic,” which also features Krizz but swaps in E-40 and Snoop Dogg for a more Californication feel.

There’s not a whole lot to get down about on “All 6’s and 7’s,” one of Tech’s best efforts in an already long and storied hip-hop career, but six Ben Cybulsky produced skits do seem like unnecessary filler even if combined they take up under 4 minutes total. And let’s be fair, it’s hard enough to produce an album full of classics when you only have 10 tracks to shine on, and even if you count 18 by subtracting skits that’s still a lot of shit with a few chances to not hit. “Cult Leader” is N9ne showing off his darker side, and it’s not terrible by any means, but Seven’s beat here doesn’t do much for him. “The Boogieman” fares better thanks to a J.U.S.T.I.C.E. League beat, but First Degree does little for me as a guest emcee and having someone from Mint Condition sing the hook just seems a little corny.

Ultimately these are minor quibbles compared to stomping hard rap songs such as “You Owe Like Pookie” featuring Jay Rock and Kutt Kalhoun or the tortured guitar rock-hop “So Lonely” with Blind Fury and Mackenzie O’Guin. Part of the reason Tech stays lonely is that haters continue to perceive him as a Midwestern rapper from Kansas City with a limited regional appear, which only proves they’ve never actually listened to his music. Tech has done everything in his power to reach out to the broadest fan base on “All 6’s and 7’s” by keeping it real and giving you something you can feel at the same time.