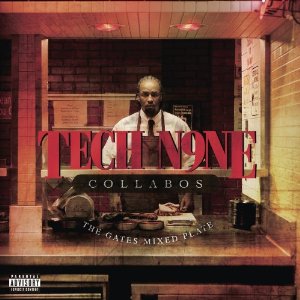 Tech N9ne is back with his third “Collabos” release. The concept is simple, Tech N9ne drops an album that is very heavy on features to keep fans happy. The over abundance of guests saves the man from wearing himself thin or becoming redundant and gives him a chance to showcase some of his Strange Music roster. It’s also a convenient way to release songs that might not have necessarily fit on a particular album. The “Collabos” albums don’t really have a unifying theme and “The Gates Mixed Plate” is no different. Overall, the album has a party and street vibe and is a sharp departure from the darkness on “K.O.D.” This change comes as no surprise as Tech N9ne made it clear he was heading in a new direction after “K.O.D.” The album works quite well and assures fans Tech N9ne remains dope no matter what topics he tackles.

The album kicks off with “O.G.,” a track that is meant to be a play on words, but whose meaning will likely be lost to those not familiar with Kansas City barbeque. The obvious meaning is “original gangsta,” but Tech is also paying homage to Ollie Gates, the founder of Gates Bar-B-Q, a world famous KC BBQ joint. Over a slinky, g-funk beat, Tech does a great job creating a feel good KC-MO anthem. Kansas City is a prominent theme on the album. Tech gives us a recipe for a new drink on “KC Tea,” possibly replacing Caribou Lou as the favorite drink for Tech fans. Unfortunately, “KC Tea” is also one of the album’s worse songs. The stripped down beat and repetitive hook does little for the track and the constant chanting of “Hennessy” in the hook only reminds me of Nitro’s vastly superior song by that name. “KC Tea” is a rare misstep as Tech manages to deliver dopeness on the majority of the album’s 22 tracks. “FU Pay Me” certainly isn’t a new song concept, but Tech’s menacing take on the money making anthem works well. The album’s finest moment comes on “Harvey Dent,” where Tech N9ne compares himself to the conflicted villain:

“They want madness, angelic and sadness
Fans relish when gladness is damned, the devilish and ashes
But I like this cash, this massive magazine ad
Gets cracking, attractive chicks passing
This rapping activates them asses
They want the clown, the paint and the evil frown
The drink and the needle now
The tainted, no feeble sounds
But I need your pounds, your pesos, your people down
With this label, and I be so bound for this halo when I’m below ground
They want that black magic, that savage with bad habits
The grab at and stab rabbits, the maggot that has cabbage”

Unfortunately, the track clocks in at under 3 minutes, leaving you wishing he would have stretched it out a little longer. As a significant part of the project, the guests on “Gates Mixed Plate” hold their own weight. Fellow Strange Music labelmates Kutt Kalhoun and Krizz Kaliko make multiple appearances. Ruthless Records’ Stevie Stone lends his deep baritone to two tracks. Devin the Dude’s relaxed drawl dominates “Afterparty” while west coast newcomers Glasses Malone and Jay Rock add intensity to their respective tracks.

Overall “The Gates Mixed Plate” delivers a solid collection of party and street tracks that are sure to give everybody something they enjoy. Given the nature of the CD it won’t be competing for the title of Tech N9ne’s best album, but it certainly will satisfy fans until we get another proper solo. Tech N9ne’s party happy direction isn’t necessarily new as he’s always celebrated all aspects of his life as a rap star. The album isn’t overloaded with shallow party jams and Tech N9ne still manages to walk the fine line between his darker roots and his newfound direction. While we all love the brooding and depressed Tech N9ne, his skills translate to dope music regardless of his demeanor.