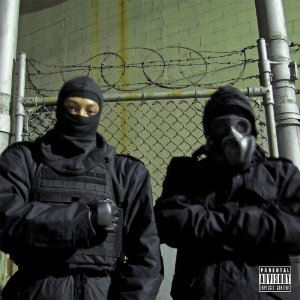 Albums about war, conflict and violence raise your adrenaline level. Nothing beats a good M.O.P. or Jedi Mind Tricks release in that regard. You feel the beats assault you, the lyrical ammunition spraying your ears, and it creates an uncontrollable headnodding response. The more passionate and angry the vocal delivery gets, the more you feel it. Sometimes the artist can even get away with a silly or nonsensical rhyme just off the emotional intensity and increased decibel level. The feeling leaves you wanting to go on a rampage like Reggie Noble in the “Time 4 Sum Aksion” video. Thankfully you don’t have to because the music is a vicarious trip through the light fantastic – you get the surge of energy from the high octane beats and rhymes and translate that rush any way you like. It’s a pure rap shot of cappuccino.

One would expect to experience a similar rush from Twin Perils on “Word Supremacy.” More often than not June Marx and Lone Ninja are pictures in militaristic outfits in their artwork – camouflage, gas masks, flak jackets, and so forth. Their song titles certainly imply a harrowing journey through a gritty hip-hop conflict, and once they parachute into the “Drop Zone” it only gets more deadly from there. Before long it’s a “Downward Spiral” into guerilla warfare, there’s a “Paradigm Shift” in who’s winning the battle, the rappers are forced to send out a “Distress Signal” before making “The Last Stand” they can. It’s all for naught though as the Twin Perils hear a “Bloody Roar” overhead and the bombs whistle through the air toward the ground. End result? A “Nuclear Winter” with only the silence of dead bodies strewn everywhere heard on the “Howling Wilderness.” You can write an entire story of apocalyptic hip-hop warfare solely based on their song titles.

Unfortunately that story would be more exciting than “Word Supremacy” itself. Rarely has an album with this much militaristic machismo inspired so many yawns. It’s not really the fault of the production – June Marx is a capable beat maestro, occasionally exceeding expectations to produce something special. The real killer here (no war pun intended) is Lone Ninja himself, who fellow writer Louis Cloutier charitably described as “monotonous” and possessed of “no kind of charisma” when reviewing “Burnt Sector.” To be fair it’s abundantly clear that Lone Ninja takes his craft seriously – perhaps too seriously – because as much as he loves hip-hop it doesn’t sound like he loves what he’s doing. Let me put it this way – imagine “The Shining” with Ben Stein in the lead role instead of Jack Nicholson. That’s Lone Ninja – he speaks about “terror and mayhem” with the enthusiasm of an overworked bank clerk doling out 10’s and 20’s to one patron after another. Marx tries to offset this with his raps but it’s an arduous task to wait for him to save the day with a rhyme while Ninja literally sucks the life out of you.

Having dealt with the people behind the Holographic Pagoda label on several occasions, I can offer nothing but praise for their time and patience waiting for their albums to be covered as albums has to be reassigned due to new jobs, college graduations, and other real life situations that interfered with getting a review done. Having reviewed “Word Supremacy” myself though I can also understand why staff members would put real life situations first and reviewing this album last. There are some tracks on this excessively long 22 song album that do shine. Lone Ninja comes as close to enthusiasm as possible over the piano riffs of “Marxman vs. Ninja” and with a little more bass this short track’s attack would succeed. “The Last Stand” can be compared favorably to a Non Phixion or Jedi Mind Tricks song musically. There’s something slightly appealing about Ninja’s flow on “Iron Clad Armor” as it goes beyond monotony into a realm of being “Dead Bent” like Daniel Dumile. Since such songs are the exception and not the rule I can’t give this album a ringing endorsement.

In summary June Marx needs to learn to pare out his weakest tracks and focus on the strongest – and when 82% of the songs are under 2:30 in length it’s clear he will run with any idea whether or not it really shows any promise. His partner in rhyme Lone Ninja desperately needs an injection of emotion. Being an underground rapper doesn’t mean delivering intelligent raps without any semblance of interest in having written them. There’s clearly room for Twin Perils to grow and become more, but it’s unclear if their ambition will ultimately exceed their talent – for the sake of future listeners let’s hope that’s not the case.