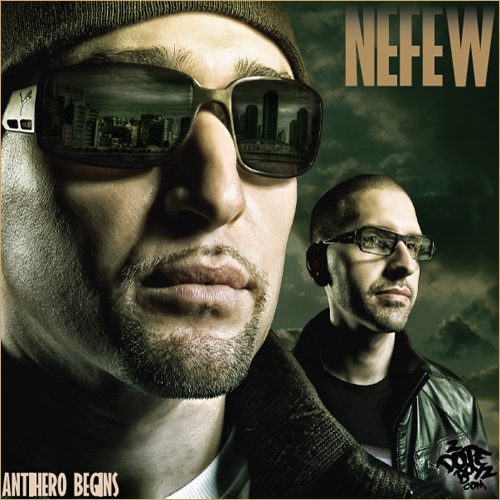 Polemikk and PA-Double make up the duo NEFEW, an acronym that stands for New Education From Every Word. The two exchange students from Switzerland met in kindergarten and have gone through life experiencing the traditional things that most kids are into. Eventually, they progressed into the world of hip-hop. Towards the end of last year NEFEW dropped an EP entitled “Homesick” which was rather well received and featured an appearance from Consequence. The two have even earned an endorsement from Puma International. The company backed them on their aforementioned EP and also their current release, “Antihero Begins”. This time around, the crew also has the support of 2DopeBoyz.com. The project is described as “prolific lyrics and odes to things that matter”. The album is divided into chapters which include “Insight”, “Courage”, “Ignorance”, “Truth” and “Pride”.

After a brief intro, “Antihero Begins” opens with the “Insight” chapter which contains two songs, “Alternatives” and “Less Music”. On the latter, Polemikk takes several shots (and a few stabs) at how the quality of some hip-hop has dropped in recent years. He also gives props to the people that can still decipher the bull from the real shit, as he raps:

“The say the sales is down, I say the bullshit is up
When they pull shit outta full pits of clones
Or should I say clowns, ’cause I chuckle at the sounds
Like what’s wrong with ’em now, every time they come around
Yeah, just in case you didn’t know
They all sound the same, but they say it ain’t so
Try to fit a format for more stacks of dough
But all we need is less music
Only the best music”

The second chapter, “Courage”, starts out with a skit that takes place in a bank. A corporate stiff that does music on the side gets a call about a possible fifteen show tour, followed by a call from his boss summoning him into the office. He nervously tells the boss about his extracurricular ambitions, but surprisingly the boss supports his decision and tells him to make a run at it. This leads into “Know Better” which is all about embracing the changes that come with breaking routines and stepping out of comfort zones. Case in point, quitting what most would deem as a “good job” to pursue a dream that might not pan out. “No Time To Kill” and “It’s Your Life” are the other two songs in this chapter. The latter falls right in line with the courage theme as it encourages the listener to “be who you wanna be and do what you wanna do.”

The third chapter, “Ignorance”, starts off with a skit that contains a barrage of various telephone rejections while trying to get A&R contact information. The songs in this chapter generally address the resistance to hip-hop that isn’t overly materialistic or pop-based. “Unless” undoubtedly reflects the sentiment of many emcees trying to make a name for themselves, as Polemikk raps:

“When the drape falls down and the music plays
It’s a huge dismay, when they boo you off the stage
Cause you lack a big chain and you rap too fast
And barely talk about money and cars, come on dog
No, I don’t pop champagne, neither do I get paid
I don’t rock that chain
Almighty God, what you have me do?
I wish these muthafuckas would acknowledge my magnitude
I guess it ain’t supposed to happen
Unless you stand opposed to rappin’
Let me put my tights on, more fashion…less rap
More singin’ and that’s that”

The introduction to the fourth chapter, “Truth”, suggests that if you can follow your talent and things you actually enjoy the process of, then you’ve found your bliss. These songs seem to touch on coming to grips with the consequences of the decisions that have been made, whether good or bad. “Face Defeat” comes off as a biographical recollection as Polemikk strikes back at the naysayers with “You point your fingers like I can’t prevail without a deal, then I got endorsed before I made my first dollar bill”. The final chapter, “Pride”, kicks off with a skit that takes place in an airport and our main character is about to board a flight to New York. He reeks of excitement and optimism, leading into the album’s closing title track. The song is the culmination of all the struggles, the second guessing and the triumphs that all come with trying to make it. Polemikk seems to know that it’s one of the album’s best cuts, as he raps:

“High up in the sky, flyin’ over bad weather
That’s when you know it’ll probably never get better
The soundtrack of an underdog that made it to a millionaire
The last round before you hold the belt in the air
[…]
This is music for great deeds that go down in the books
The haters on the side that give you strange looks
The type of shit that makes you put an ugly face on
The type of album that you end with a great song”

And thus concludes “Antihero Begins”. On a whole, I like the NEFEW brand of hip-hop. Polemikk and PA-Double both have a nice sound to their production and the aforementioned Polemikk also has a good handle on his lyrics and delivery. If I hadn’t read the press information, I’d have no idea that these guys were from Switzerland. I’m not sure if that speaks more to their talent or my ignorance, but I’m hoping it’s the former. In any case, it’s easy to see why Puma and 2DopeBoyz are down with NEFEW. I’m interested in seeing what they’ll come with as they continue to get more exposure, but it seems to be promising thus far.