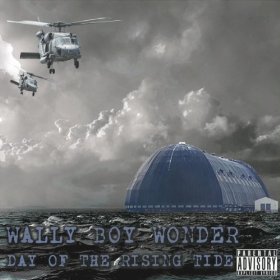 Just how bad is Wally Boy Wonder’s sophomore effort “Day of the Rising Tide”? Let me see. Bad enough that I want a full refund despite the fact that the album was sent to me as promotional material free of charge. Bad enough that if I knew more about the legal process I might consider filing suit against Wally and his label for wages forgone and psychological damage incurred in the two hours I spent listening to it. Bad enough that I would refuse to even use it as a coaster because I have too much respect for my beverages.

Let me back up a little. Wally Boy Wonder is a self-proclaimed renaissance man. The white guy from Akron, Ohio is a writer, director, and on at least two occasions, a rapper. Wally Boy Wonder is a name like Baby or Young Black Teenagers in that it is contradictory of his nature: his first name is not Wally, and he is neither a boy nor a wonder. “Day of the Rising Tide” is the heavily anticipated follow-up to his earlier opus “Where’s Wally?” By heavily anticipated I mean that it may have been briefly considered by a few friends or family members who might be nice enough to set their drinks upon it.

To get an idea of what “Day of the Rising Tide” sounds like, imagine a drunk person clapping his hands rapidly into a muffled microphone at fairly regular intervals. The beats are comparably complex and about as appealing. I refuse to refer to them as “music” because they’re just about the most unmusical arrangements fathomable. The album sounds like it was recorded on some sort of prehistoric eight-track, but whatever money Wally saved on modern recording and production equipment he invested in autotune technology. That’s right, he punctuates his IQ-endangering lyrics with top-of-the-line autotune choruses.

Speaking of lyrics, Wally’s might be most valuable for the purposes of scientific experimentation. Had I the good will or patience to listen to it again, I might be interested to run some sort of test to observe the level of brain atrophy that occurred following prolonged exposure to “Day of the Rising Tide.” I won’t bore readers with a track-by-track breakdown, but here’s a verse from “See Saw.” Imagine it rehearsed with minimal sense of rhythm over a composition created on a keyboard with one key:

“Eat pellets like Pac-Man, first count stacks man
Want some? I attack, man
Poppin’ out like a wax man, just the facts man
Drag that, ready set, really wet
From the dance, wet, calm down girl we just met
And the party just started
There’s mad girls out there don’t be retarded
I think it’s time we parted
To the kitchen where the shit is hot
On the island under the pans and pots
Girls lined up doin’ body shots body shots
This must be the hottest spot hottest spot
Snow lined up on the granite
In mass supply, they demand it
No cameras, not candid
We party undercover like bandits
Party’s jumpin’ jumpin’ up and down
Up top then back on down
See saw see saw see saw see saw”

“Day of the Rising Tide” is an aural assault, an intellectual insult, and just might be the worst rap album I’ve ever heard; so simplistic that I honestly believe a third-grader would be embarrassed. One can’t help but wonder about the intent behind a record like this: could those involved actually have believed that they were making a worthy contribution to the world, that it was a worthwhile use of their time, or that they might somehow profit from it? One of Wally’s self-proclaimed aliases is “The Son of the Silent One.” Why? Because his father is deaf. I’ll close this review by abstaining from a tasteless but probably accurate joke about his biggest fan.