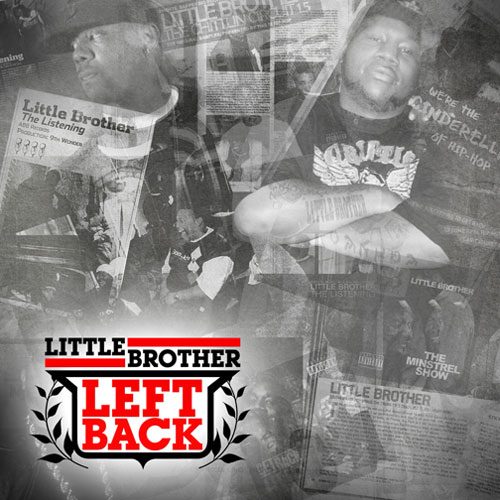 Little Brother is retiring? Say it ain’t so Pooh, say it ain’t so Tigallo. That’s not the news hip-hop needs in 2010 – or for that matter EVER. Little Brother is that rap group you could always turn to when the radio mix was too banal, the music videos were too materialistic and the internet shows couldn’t deliver you from the doldrums. From “The Listening” to “Getback,” no matter how many years went between albums, every Little Brother release was a hip-hop treasure for the consumers. Their style and sound bridged the gap from the Native Tongue era to the modern day Carter era (Lil Wayne and Jay-Z) as perfectly as the two members complimented each other lyrically. Phonte plays the laid back intellectual who likes to have fun but takes his rhymes seriously, while Rapper Big Pooh is the down to earth North Cakalak’ cat who quiet as kept drops gems and is underrated lyrically. If you needed a fix of funky, intelligent, provocative hip-hop LB could always oblige.

Unfortunately the end began over three years ago when their original musical architect 9th Wonder had the cliched “creative differences” with his LB fam and ultimately split from the crew. An increase in solo releases by Pooh and Phonte followed, and while no animus between them has ever appeared (or is implied) it was increasingly clear that the group felt more and more comfortable working solo. Statements from the members leading up to the release of “LeftBack” made it clear there was no chance of reuniting with 9th Wonder, and even less chance of them continuing as one cohesive unit beyond 2010. It happens in the music business just like it happens in real life – sometimes people come closer together over the years and sometimes they just drift apart.

Instead of fighting the inevitable, the LB chose to celebrate their musical legacy with one last album for their fans. “LeftBack” is the final statement. Much like when Tha Alkaholiks finished their career as a group on “Firewater” or Run-D.M.C. hung it up on “Crown Royal,” all one can hope for is that the statement made by the last album reflects the importance of the career of the collective up to that point. Unfortunately in each of those cases the last album didn’t live up to the past albums – Tha Liks didn’t have the passion any more and D.M.C. was so absent that “Run and Company” would have been a more fitting artist description. Thankfully LB isn’t going out like that. The Khrysis produced first single “Curtain Call” has the classically jazzy feel of previous releases, with none of the lyrical sharpness of ‘Te or Pooh dulled one bit:

Phonte: “Aiyyo, automatic, systematic, me and my nigga at it
Last go round for the pound, get your Instamatics
with all the pictures added, we put our stamp on it
Not being Cam’Ronish, I mean +Diplomatic+
I say what I feel till I ain’t gotta say no more
I dedicate this to the A&Rs
that said LB is the game but they ain’t playing ball
And all the turncoat niggas who forgot what we was playing for
So you can call this the day tomorrow
It’s the removal of a fixture, a complicated picture
and not even Clarissa could +explain it all+”

Big Pooh: “This is it, the last monologue
Last act in the play, you can say the epilogue
New hooks to begin dear friends
You can always press rewind and relive it again
Listening in ’03 made the people take notice
Shout to Beni B even though shit was bogus
Toured around the world, came home, new deal
Chittlin Circuit out, thank Koch for the meal
Minstrel Show here looking for mass appeal
Guess they wasn’t ready for the real on the reel”

As refreshing as the song is, one can’t miss the intent of the title or of the verses being dropped, nor the irony of a song called “Curtain Call” being the first single on their last album – not to mention the first track ON the album. Then again wry humor and an uncompromising ability to look at the music industry without rose colored glasses on have always gone hand in hand with Little Brother albums. “Table For Two” featuring Jozeemo and Yahzarah finds Phonte trying to be Mr. Suave at the restaurant while quietly asking the waiter if he can pay the bill for dinner on MULTIPLE credit cards – that is whichever ones he’s not already overdrawn on. That puts “starving artist” in a whole new light. “Revenge” featuring Median and Truck North finds the LB’s reclaiming turf lost to their contemporaries “Big Payback” style, while Pooh boldly stating “Told you I’M THE SHIT – I did not mean prunes!” There’s a emotional component here too as Bilal and Darien Brockington croon to help each rapper get “Second Chances” at their female relationships over a clave-heavy Denaun Porter beat. There’s even an angry side on the growling King Karnov laced “So Cold”:

Big Pooh: “Kicked down the door, ain’t no need to peek in
I’m a bold muh’fucker, got both of my feet in
People got a pension for seeding
Just make sure I’m slided at the top when the brackets is out
Cause Poobie make tears appear from the fear
I steer in my peers when they hear me shout
I’m a man, never see me pout
Eighty-eight never see my route, till I scored again
Most niggaz live life in a fantasy world
Deep rooted in reality, no time to pretend nigga!”

Phonte: “Yo, I promise you don’t want no part of this mayne
You a slave, still a part of the chain
and Phonte is a part of the change
And to my whores galore, I thank you for your support like ballers and chains
I go past the pulpit, and triple 5 past your bullshit
just to get to the heart of it and
I get deep in your cartilage, all y’all singing
My balls swinging like Christmas ornaments mayne”

Little Brother successfully run the gamut of styles, sounds, wit and emotion they’ve been so well known for over the last 8 years… and yet in some respects the album is a bit of a copout. A few of the best tracks are just remixes of songs from their previous album, including the “Who Shot J.R. Ewing Remix” of “After the Party” featuring Carlitta Durand and the “Purple Suit with the Matching Gators” remix of “Two Step Blues.” One would expect Little Brother’s final album to be entirely new material, or at the very least include such remixes strictly as bonus tracks, but they’re mixed right into the middle of the presentation as though they belonged or were entirely brand new. I’m not fooled and you shouldn’t be either – they’re enjoyable songs but ultimately they’re just filler. Still filler from the LB’s is better than the filler you’re going to get from anyone else so I can accept them fudging it a bit, especially when they close on the excellent “24” produced by Khrysis and featuring Torae. It sounds like the next evolution of the LB sound – that is if they were still going to be around.

Phonte: “Y’all got hip hop soundin like kids-bop
So I’m gonna murk these tracks like Berkowitz
The Son Of Samuel, watch me surface with
A new rhyme that make y’all wack niggas call time out
Let’s talk real shit
If you can’t feel this
You sniffin that Lohan or smokin that Winehouse”

While not every group in or out of hip-hop can finish their career on a high note, it’s fair to say “LeftBack” is a better comes closer to it than most ever will.