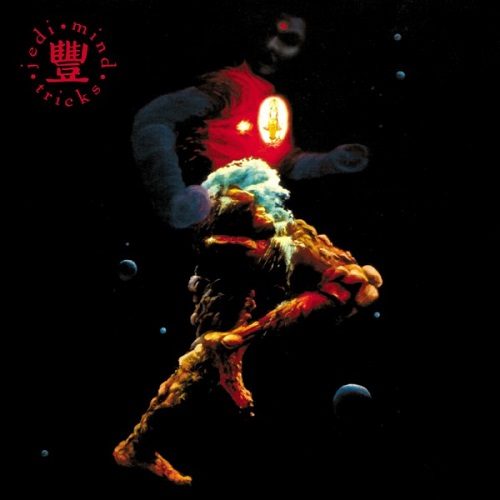 Whether reviewing music, movies, or books, the critic must be acutely aware of two different things: his own preferences, and those of his audience. With this said, while contemplating my review for the Jedi Mind Tricks album, I had to temper my own enthusiasm for the LP with the realization that this music is far from typical hip-hop. Sure, I could holler at whoever is willing to listen that they should buy this joint just to pad the artist’s pockets and perhaps get in good with the group’s label in hopes of getting some promo material in the future. But I feel obligated to point out the differences between this material and what is considered more “typical” hip-hop.

So, with the reader’s curiosity (hopefully) piqued, what are these differences? I imagine that if I had to align JMT with another hip-hop crew, the closest comparison might be with Sunz of Man and Killah Priest, but this isn’t entirely accurate. While they do have a few similarities in lyrical style, they really are two different animals and liking one won’t necessarily mean you’ll like the other. The similarities lie in the heavy use of religious references and imagery. The difference, however, is that the Sunz of Man interject a certain level of street-thug steelo into their rhymes, thus providing for the listener an anchor to more traditional hip-hop territory. JMT, on the other hand, leaves this anchor behind at the mothership and floats off into a Twilight Zone of sorts with sci-fi lyrics dealing with spaceships, Atlantis, and ancient prophecies.

JMT is composed of two members, Ikon the Verbal Hologram and Stoupe the Enemy of Mankind. Yes, those are their names so you know you’re not dealing with your average street thug/MC. Providing lyrical reinforcements are The Lost Children of Babylon, whose style is right in line with Ikon. Rather than go into greater detail describing their lyrics, I’ll simply let the lyrics speak for themselves at this point. Here are a few lines of typical JMT material for the reader to chew on:

“So where you gonna stand when the Ehlohim return, seven great sages throughout the ages say you burn/ it’s my turn to shine, I’ll redefine the crystalline-biological structures implanted in your mind”

“Speaking my name is blasphemy, so call me your majesty/ majestic phonetics begin affecting reality/ religiously I mystically chant and recite on mics at astronomical heights guided by the northern lights”

“The plot thickens, the psychological crucifixion, I part red seas and travel landsliding Christians/ My rhythms, escape the earth in certain crisis, I create raps for Christ and twelve righteous tribes”

As you can see, far from your everyday, run-of-the-mill material. Corny? Perhaps to some, but I love listening to this stuff. It’s fun, it’s different. While other heads are bragging about the size of their bank accounts for the umpteenth time, these cats are rhyming about attacking mastodons, transforming into tornadoes, and time travel; all very cool-sounding shit. So cool in fact, that my only complaint about the lyrics is when they bring things down to earth and kick the more routine pop reference or metaphor, something totally detrimental to the atmosphere that they are trying to create. But this complaint is a small one as these moments are uncommon. Overall, they keep things interesting and do their thing exceptionally well.

Production-wise, in terms of creating an appropriate soundscape for the lyrics, the production here is damn-near perfect. The theme throughout is dark and moody; no snappy disco samples here. My favorites include The Winds of War, with a gloomy violin and wind-effects providing a backdrop for Ikon; Omnicron, with a lead-off sample that I’m guessing is from a Heaven’s Gate cult member talking about spaceships and a simple acoustic guitar riff with enough production tweaking to give it an eerie sound; and As it was in the Beginning, with a nice piano loop and a spooky operatic scream reminiscent of 4th Disciples work on Sunz of Man’s Soldiers of Darkness. Now, I’m not a producer or a musician, so I’m not hyper-critical about production. But, some more discriminating listeners may have a few technical complaints about the production. The beats are a bit flat at times and if they dug in the crates for samples they didn’t dig very far (Wu’s Triumph was sampled as was a recent Organized Konfusion joint, but I aint gonna knock ’em for sampling Hellraiser). But these problems aside, I think Stoupe (who I’m guessing did the production work) did a great job. Rather than throw JMT’s unique lyrical style on top of generic hip-hop production, a slightly odd combination at best, a fitting soundtrack was created which complimented the lyrics of Ikon and crew. And for this, he gets a “job well done.”

My guess is that whether or not you like this album is gonna depend on what you think of the lyrics. To me, they’re cool, fun, and original. To others, they may be nothing more then silly mumbo-jumbo written by a bunch of Trekkies with a Bible and an 8-track. And that’s fine, I can understand that criticism; JMT is definitely not for everybody. But for those who might like their style, by all means, check ’em out. I doubt you’ll be disappointed. As for me, I consider this to be one of the best hip-hop albums of the past year or so.