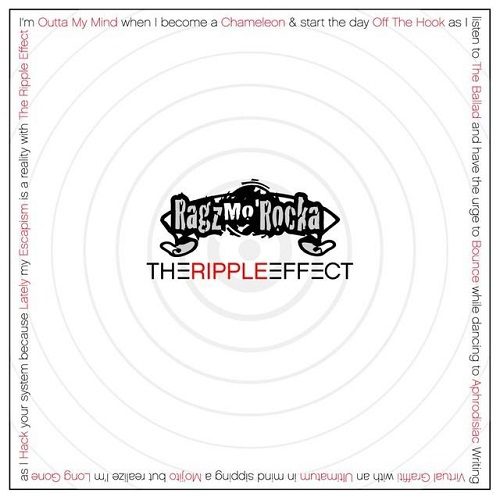 One word has the chance to bias you for or against Ragz Mo’ Rocka before you even hear a single word or note of this group’s debut album “The Ripple Effect.” Unfortunately it’s a word that I simply can’t avoid if I’m to honestly review this album for you the reader, because every single part of the press kit that came with it screams it at 100 decibels. From the bios for each individual artist, to the artwork that accompanies every page I flip through, to the fact their guest stars are better defined than they are, the obvious comparison just can’t be ignored no matter how hard one might try…

That’s right. Ragz Mo’ Rocka was first described to me by their publicist as an “animated trip-hop group” but given how many hundreds of e-mails I receive every week as the architect of this site that didn’t initially resonate. To me “animated” could simply have meant they were energetic performers and given they were billed as “trip-hop” I wasn’t even thinking cartoons – I was thinking rap songs made for the discotheque. Turns out “animated” was not a joke at all, and if you look to your left and your right you’ll see visuals of this Gorillaz 2.0 concept. “Sir Reel” is not only a bad pun, he’s a little bit disgusting to look at. Do you really want to hear the musical stylings of a fictional character with an anthropomorphic case of athlete’s foot? Or take “Topaz,” the group’s lone female contributor, looking like a hypersexualized hip-hop version of the creatures found in the movie “Antz.”

For better or worse the concept of Damon Albarn’s virtual band has always worked because the members of his “band” looked like hideous caricatures with hollow eyes, intentionally or otherwise playing up the fact there had to be real musicians behind the grotesque Gorillaz. Instead of going for exaggerated versions of real life musicians, Ragz Mo’ Rocka went the other direction and made characters so “animated” they might as well be part of the cast of “Chowder” or “Kim Possible.” Now some might question what this has to do with the production, lyrics or music of RMR, but the problem here is that the people involved in the project have made it exceedingly difficult to separate the two. Sadat X makes an enjoyable cameo on “Virtual Graffiti” but is still forced to refer to these real artists by their kayfabe cartoon identities. When you consider the lengths X took to make us aware that his real name is Derek Murphy

this seems all the more absurd.

The “trip” in this “trip-hop” of Ragz Mo’ Rocka is not the choice between the red or the blue pill they offer in “Mo’jito” – it’s the fact they genuinely want you to believe they are cartoons that walk around in real life. Albarn’s virtual band functions perfectly well in the virtual world, but at the end of the day you still know he’s the puppet master pulling their musical strings. On “The Ripple Effect” it’s much less clear who’s really in charge, as no one seems willing to pull back the curtain and show us the little man pretending to be the almighty Wizard. Despite that you do occasionally get the feeling the artists involved recognize the absurdity of their situation and attempt to break the fourth wall on songs like “Aphrodisiac,” where they blatantly describe their sound as “animated vibe doin’ animated things,” pointing out the fiction of their bios and drawings you’re probably supposed to otherwise ignore.

While I don’t really care for this poorly drawn class of Nickelodeon rejects and their wannabe virtual insanity, I do enjoy the reality behind some of their better songs. The short “Off the Hook” lives up to the description, a stomping heavy hip-hop anthem that you’d almost think was screwed and chopped. “Lately” is a sultry enough ballad that I’d like to meet the woman behind Topaz and not her insect alter ego. “Daymare” featuring Will Tell is a well produced appropriately menacing melody, and “Ultimatum” is some new era Soul II Soul that takes full control and (pun definitely intended) brings you back to life and back to reality. There is clearly talent hidden behind their masks, but this new attempt to cash in on the Gorillaz’ success seems so poorly conceived I wish they’d drop the facade altogether. There would be a real “Ripple Effect” if Ragz Mo’ Rocka would keep it true and not be so animated, but I doubt RMR will make much of a splash.