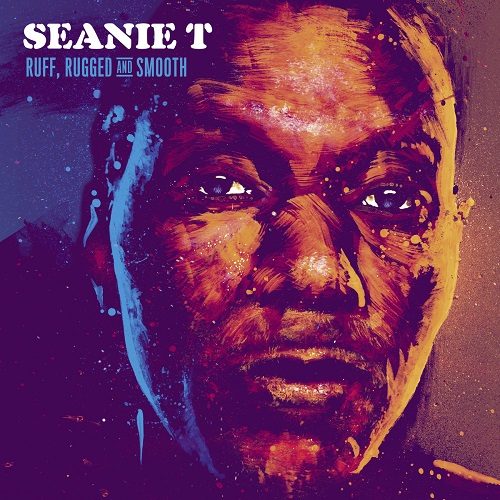 Nothing in this world, it seems, is harder to come by than a somewhat sustained career as an MC in the United Kingdom, across any genre, ragga, hip-hop, drum ‘n’ bass, garage, grime. Many come and go, some return, but very few seem to actually stay. By the same token, some artists have found ways to stay in rotation without that big moment of their own. Dig a little deeper and run into recurring names with extensive discographies. Numerous appearances scattered across the musical landscape amount to something resembling a steady career path.

Early on, Sean Theobalds was featured on two respective albums by Roots Manuva and Blak Twang, he was part of all-star cast The Blacknificent Seven and long-running band project Dub Pistols. And he cast his net across the sea to Germany, a connection he takes advantage of for his official 2019 solo debut. Indeed Seanie T has a long history of collaborating with Hamburg-based musicians, with Dynamite Deluxe in 2000, with DJ Dynamite (as Joni Rewind) in 2002, with the Sam Ragga Band between 2002 and 2006, with Phantom Black in 2011, with Pitch & Scratch in 2012 and with Brixtonboogie in 2013. Consequently, one half of neo-funkateers Pitch & Scratch, DJ Suro, scores “Ruff, Rugged and Smooth” in its entirety.

Together they come up with the proverbial x amount of styles. Opener “Get Hustlin” early on proclaims MC mastership with this subtle lesson about keeping your business private:

“Some guys, they work for MI5
Their hustle is to infiltrate and turn and testify
I’m hustlin’ on the low, under radars I must fly
So I’m never gonna advertise
my true hustlin’ enterprise
I struggle, then I get things right
Stay humble and I sacrifice
The roll of my dice most precise
in this world of men and mice
On the line I put my life
for my likkle piece of pie
Got a whole heap of mouths to feed so you dunno every day I
(Get hustlin’)”

It’s a back-to-the-roots moment for Sean, who switches smoothly between a more standard English and thicker patois, helming DJ Suro’s dubby and bubbly riddim without difficulty. Just as much agility is required for the b-boy-paced “Mad Dem”, a definite throwback with cutting and forcefully flung raps as if it was 1991 again: “The men and women, all a-dem cheerin’ my vision / the way I’m illin’ and chillin’ and willin’, I’m ready for sound-killin'”. Seanie T’s professional career may not go that far back, but his album goes to considerable length to cover all of his musical interests. They range from romantic roots reggae (“Dancefloor”) to soul-sampling hip-hop (“More of It”) to modern sound clash ammunition (“Blaze Fire Bun”).

“Roots Manuva choppin’ like a chop stick / Seanie T jumpin’ like a jump kick”, “Warning” celebrates the long-lasting partnership to smoldering headphone funk – sitting next to dance instruction “The Bird”, flapping its flamboyant wings so exuberantly you just have to step aside. Which then is followed by “More to This”, erupting with soulful explosions but also with pent-up anger as Seanie levels criticism at rappers who are so desperate for attention they end up telling fables (“Never did a coke deal, still / you’re promotin’ / all that gun totin’ / You’ll never be remembered, if that’s what you’re hopin'”) or reveal too much information (“You need a good lawyer for that confession on wax / You said times, dates, figures, facts”). “The worst part of it, they get the best review / while the righteous youts can’t get a preview”, he complains.

Every now and then such frustration may also come over the close to 20 ‘UK Allstars’ that Seanie gathers on “Veterans”, but they don’t let it show on this triumphant reunion. Award yourself a veteran badge if you can identify all the eminences from Breis to The Ragga Twins. More than an afterthought, the following “UK Warriors” honors his people’s contributions to UK culture in a sunny, entirely positive mood. It almost goes without saying that Seanie T ends his album on a righteous note with “Acceptable”. Like his collaborator, DJ Sero has a broad horizon, but while his creativity shines through on tracks like “Plush” (an ode to style-conscious, self-supporting women) with its teasing flute, overall he’s almost too perfect of a provider. Perhaps a more assertive role on his part would have resulted in a more cohesive package. Yet the undeniable advantage of “Ruff, Rugged and Smooth” is that it fully captures the UK warrior and veteran’s impressive versatility.