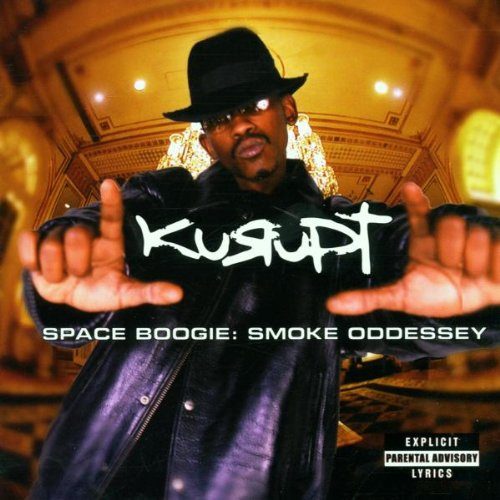 Kurupt is definitely smoked out on this session. While that may seem a somewhat obvious assertion given that he affectionately titled his newest release a “Smoke Oddessey” it actually goes much deeper than that. Kurupt is so high off his own funk now he isn’t about to give a fuck what anybody has to say about his music or his choices. Silly pop crossover? Thugged out hardcore? Duets with folk rock metal whiteboys? Yes, the “Smoke Oddessey” is all of that and more. Journey through a chronic’d out set of studio sessions where the only limitations were the demented mind of one of rap’s most perplexing anti-heroes.

You’re not going to find any solid ground to stand on, so get used to free floating through a haze of that other shit from the intergalactic “Intro” onward – a high so high that it causes a trip where they beam people up to the mothership, a place where no time even exists. Nate Dogg and Kurupt do their best to bring things back down to earth though; rapping over the strings of Fredwreck and the Velvet Orchestra on the funked out title song. When you get your bearings on this planet of G-Funk, they shatter your world like Titan A.E. and blast you off to planet Pimpology. If you thought Kurupt had laid it down on previous misogynistic “fuck a bitch, a bitch is just a bitch” raps, you ain’t seen nothing to how his partner in rhyme Soopafly ups the game to a whole NEW level over sparse off-key pianos:

“Aiyyo if rappin was a bitch you’d have, no pussy
Maybe tongue-kissin but still, no pussy
Lookin at me dumb I’ll slap you so dizzy
Soopa so busy, cockin the fo’-fizzy
Mad cause I’m too fly, and I pumped ya hoe
Crushed ya flow, you got +Jealous+, Club Nouveau”

Some people who are die-hard fans of Daz and Kurupt may be a little mad at the following track “On Da Grind” since it already appeared on Daz’s “R.A.W.” album; but actually they should be happy that such a laid-back funky track got pushed to a much broader exposure (many stores still do not stock Daz’s independently released CD’s). Once again though the album switches terra firma faster than a ship can cross the galaxy at warp nine with the downright silly “It’s Over” featuring Natina Reed – a track that could leave Kurupt’s most thugged out fans scratching their heads and saying “What the fuck?” Though a lot of people may be tempted to hate on it at first listen it’s actually quite refreshing in it’s near pointlessness – a track you can kick back, laugh at, and enjoy as you sip a 40 or dance at a party. Who said a rap song couldn’t kick back and get goofy now’n’then?

“Can’t Go Wrong” instantly sounds like a DJ Quik track, and if you thoughts so you were right – he funked up the slinky bassline and overlaying instrumentals as well as providing his traditional rap flow. Quik continues to be one of the five most underrated musiciansand rappers in hip-hop, so sleeping on this cut would be damn near criminal. You can’t really go wrong with Fredwreck’s pulsing “On, OnSite” either; and even though Kurupt’s performance is a little underwhelming it does feature the surprising and welcome return of a rapper Snoop put in the game you may remember as Lil 1/2 Dead, who now takes on the Nate Dogg role and sings a very workable hook.

The one track that may have even more crossover potential than “It’s Over” is his duet with Jon B, “Sunshine.” Kurupt’s charismatic attack meshes perfectly with Jon’s silky delivery in the chorus; a track he does double duty on by providing a thumping bassline as well. Before you get too comfortable with singing though; the ground crumbles and you’re launched through space to planet Chron, where only “The Hardest Mutha Fuckaz” can survive the oxygen deprived atmosphere. Fittingly the industry veteran MC Ren is the first to lace the track, a rapper who sounds well adapted to the harshness of rap worlds and used to surviving on lean times:

“Bring yo’ BITCH ass in, close the do’
Now you wanna run and fetch me a ho
Motherfucker tell yo’ momma tiptoe, when she pass my do’
Kurupt, got this bitch, bout to toss this ho
And when we make a nigga shit, always makin a killin
I be hearin you bitches – ‘There go The Villain’
Mad cause yo’ revenue stopped from drug dealin
Mad at me cause I’m makin shit them thugs feelin”

It’s hard for Xzibit or Kurupt to top that level of sheer bravado or animosity in their own verses, but they do hold it down nicely. It’s much more surprising to discover that Fred Durst actually comes off like a more pimped out version of Eminem on “Lay it On Back” – given that he seemed to whine and howl his way through most of his misguided prior rap appearances, the new style is MUCH appreciated. He actually sounds like he BELONGSon a track with Nate Dogg and Kurupt – and when you’re still getting over that shock peep out the crazed samples opening “Kuruption” right before Everlast reprises his “What It’s Like” choral styles and sorrowful singing style. Sandwiched between these cuts are two bombs – the stomping “Just Don’t Give a Fuck” by DJ Lethal and “At It Again” with it’s re-interpretation of Teddy Riley and Aaron Hall. Oooh-WEE!

Depending on where you purchased your CD, it may come either with no bonus track or one of two different limited release offerings. The version from Best Buy stores includes “The Life I Live”, a duet with an unknown artist named Krook which smoothly narrates Kurupt’s game of bang, slang, and rap thang over a funky beat. By the time you’ve reached the end; either clocking it at 66 or 71 minutes, it’s been one hell of a funked out journey. Not content to stick to tried and true G-funk asthetics, or simply release a CD that retreads his past solo works or Dogg Pound duets, this album actually is an “Oddessey” through the mind of a rapper fed up with doing the same ol’ same ol’ and ready for something new. Of course Kurupt is still Kurupt – he’s still gon’ smack bitches and offend feminists, but musically he’s taking more chances and the results pay off nicely. Roll up a fat one and journey with Kurupt to other rap worlds – it’s all about the trip, not the destination.