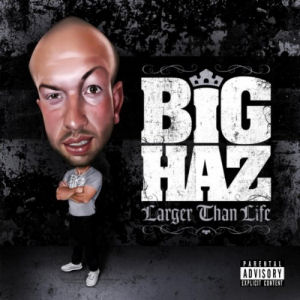 Critics strive to give every artist a fair shake, but sometimes the artist’s own misguided attempts at publicity preclude us from doing so. Take Big Haz, a Melbourne, Australia based rapper whose debut album features an impressive list of guest spots. Masta Ace, Elzhi, Chino XL, Triple Seis, King T, and Canibus are all featured on the album. That is a truly impressive line up for ANY rapper, let alone one who is 1000s of miles across the ocean. I was hyped already to check out the rapper/producer/label owner who had the resources/connects to put this album together. Unfortunately, Big Haz felt that wasn’t enough and dedicates an entire paragraph of his press material to one song. That song features Chino XL and Big Haz wants to make it clear Chino XL gets dissed on a song he’s featured on. In fact, if you look Big Haz up on youtube you’ll find the diss song pop up on the top of the list. In this case, a misguided diss overshadows a promising LP.

The track in question is called “30 Wishes” and is a pretty straightforward affair:

Chino XL: “I wish you had enough time to analyze every line that I had
Press rewind and realize and find that I spazzed
I wish listening to the radio wasn’t so sad
Causing me to throw up like the black hats of a college grad
You’re unsuccessful as the siege in Leningrad
Causing me to shoot Lady Gaga in the face while wearing a Madonna mask
I wish this whole new fad of this pop generation of rap I could stab
Many if any would die already
Disguised pennies trying to be dollars
Make me wanna holler like Marvin when signed to Motown
I wish I was born knowing just what I know now
Exceeding and speeding, I’m the heathen that never slows down
I wish Biggie never signed with Diddy
Bet he’d be running the city
Spitting silly, pushing many whips that’s gritty
Give me many wishes, give me a mic, I’m offending bitches
I’m deadly as Michael Jackson’s pill prescriptions
Underestimated like insurance companies when cars collide
I murder everything alive like time
I wish that I could find and discover the cure for cancer
Wish these euro jerk rappers woulda stayed dancers”

Big Haz: “Wish this jerk rapper woulda kept his word, instead of giving false answers
I wish I could take back the respect that I gave
reinspect every step that I made
Erase all the days that I played all your tapes
And say to your face you’re a major disgrace
How I made the mistake of placing my faith in a snake
That was fake and just making me wait
Everyday, you stop in the mirror
The clock tick tocks and you block me on twitter
And don’t take the word of a wordsmith
On verses when he’s got excel on his purses
I’m a dog, you a cat like Felix
Maybe next year I’ll let you rap on the remix
Lyrically, you can’t get near this
And you’ll know the truth homeboy when you hear this”

It’s a shame an otherwise solid track with a nice beat and good concept gets broken down to a perceived diss and reply. Chino’s verse by itself doesn’t scream diss to me. Big Haz’s reply isn’t the scathing, angry diss I expected. I can’t even infer what this is all about. All I know is an otherwise decent track is wasted and Elzhi’s guest verse gets lost in the mix. This kind of thing can’t help but put a bad taste in my mouth. With everything this album has going for it, the diss seems unnecessary and rather tame for all the hype. If I were Haz, I would have rather focused on the chipmunk soul sweetness that is “Ride The Sky” and the fire verse from Triple Seis that is harder than anything he ever spit with Terror Squad. Big Haz rips a vicious couple of verses on the track as well. I would have also focused on the King T feature on “Kingz.” Sure, the beat is nothing more than a very good Dre g-funk imitation, but I’d be lying if I didn’t admit it sounds better than anything on “Thy Kingdom Come.” Even the Canibus feature would be a better place to focus with its foreboding beat and subject matter.

“Larger Than Life” is a solid, but largely derivative album. Big Haz’s flow and style are clearly inspired by Big Pun and “Chain and the Saw” makes that painfully clear. I say painfully, just because Big Haz lacks the gritty, raw sound Big Pun pulled off and many times sounds like another Termanology. That doesn’t mean he’s bad lyrically or even flow wise, but his style lacks originality. Big Haz is more skilled in putting together beats, but the lack of originality once again detracts from his talent. “This Is Hip Hop” clearly takes its inspirations from Pete Rock’s pulsating horns. “Kingz” is a Dre imitation. Chipmunk soul sounds dope, but is far from original.

It’s hard to pin down Big Haz and rate his album. The production is dope throughout. Big Haz’s topic matter is varied and he’s a capable emcee despite his shortcomings. He drops some truly dope lines on this CD. You can’t help but give him props when he proclaims “you thought the devil was bad and raw, til you saw Big Haz do a chainsaw dance on your skull.” He certainly doesn’t sound out of place next to Masta Ace, King T, or any other established vet. If you favor straightforward, boom bap inspired rap you will likely enjoy this album thoroughly. If you seek a little originality in your music, Big Haz might come off too much like an imitator. Either way, Big Haz’s beef with Chino XL should be the last reason you peep or don’t peep this album. The sooner Big Haz realizes that, the sooner he’ll be able to focus on refining his style and carving out his own niche.