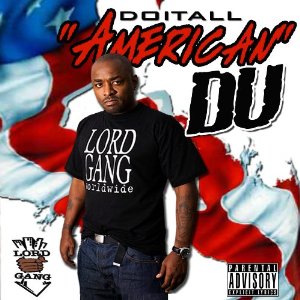 East Coast fans remember DoItAll as one third of the Newark outfit Lords of the Underground along with DJ Lord Jazz and Mr. Funke. The trio gained acclaim for their 1993 debut “Here Come the Lords,” which yielded the timeless singles “Funky Child” and “Chief Rocka,” and its 1994 follow-up “Keepers of the Funk,” both helmed by the magnificent production duo of Marley Marl and K-Def. After their initial success, the group only reunited for 1998’s “Resurrection” and 2007’s abysmal “House of Lords,” an album so bad that it appeared to be the final nail in the LOTUG coffin, leading fans to speculate that their early brilliance was solely the product of Marley Marl and K-Def’s genius. While the bright, horn-heavy production was certainly the main attraction of the early LOTUG records, DoItAll and Mr. Funke were no slouches on the mic, sporting upbeat flows and tireless energy that served a perfect match for the rich and funky music. Seventeen years after his group’s debut, Dupre “DoItAll” Kelly struck out on his own with his first solo album on Poppyseed Records.

A glance at “American Du”‘s tracklist should be enough to entice any ’90s East Coast fan, with a dream guest list including spots from Masta Ace, Grand Daddy IU, Mr. Cheeks, Treach, Shyheim, Craig G, Ed O.G., DJ Kool, and Michael Bivins with production by Pete Rock, Scott Storch, and Fokus. For such a low-profile release, these big names are all the more impressive, and they do their part to ensure that “American Du” is laced with strong posse cuts. Still, the hour-long running time means that Du saves plenty of spotlight for himself. He gets things started on the heavy, street-aimed “I Gets It In”:

“Jesus, this is my thesis
Warning to all y’all, y’all better heed this
I ain’t comin’, I’m here, spit darts, throw spears
Better not land near, boy I’m so clear
E make my vocal change, lower than the vocal range
I made a little bread, but y’all still owe me change
Hands up, blaow blaow, oops, I mean heads up
E bring my vocal back, whoo, I am so tough
Category? Naw, you can’t categorize my story
None to do it after me will ever be before me
Well maybe with the dough, and maybe with the cars
But never with the flow ’cause I’m so out on Mars
Helicopter propellers airlift the artist
I hover over crowds, then stagedive retarded
Never lethargic, I always hit the target
Don’t you fools get it? I’m a marxman’s marxman”

If the bling-bling raps and stale boasts aren’t enough to convince the longtime LOTUG fan, it’s understandable. The quality of DoItAll’s performance depends entirely on the listener’s expectations. If you haven’t checked Du since “Keepers of the Funk,” you’ll be dismayed to find that his trademark rapid flow has been replaced by a lethargic delivery, and for the most part, he’s lost the energy that was his greatest attribute. In addition, his lack of lyrical substance and concepts is blatantly apparent, especially when the music suffers. Tracks with such unimaginative titles as “We Can Do That,” “We Gets Down,” and “Yeah” are as insipid as their names indicate. However, listeners who check “American Du” after hearing the mess that was “House of Lords” will be pleasantly surprised to find a far superior performance. While the halfhearted patriotism concept proves too ambitious for such a conceptually limited MC, the album contains some definite bangers and worthwhile collaborations. First on the docket is “Surrender,” featuring an absolute menace of a Pete Rock beat:

“Give it up, gimme gimme, yes I want that
I bring the energy, PJ bring it back
Bring it on, bring it up, I could help your single out
Call me up, I’ll knock it out, home run, way out
This the way you do it when you do it how I do it
Make you run and get the fluid for the sweat that you losin’
Now pardon my demeanor, but, this what happens when I’m fiendin’
You thinkin’ different, let me know that you were dreamin’
You’ve now been surrounded, got a bounty on your bounce
And I done sold a couple records, but I ain’t really countin’
Okay a couple million, but the flow’s still resilient
Like wine and the crackers, it’s a blessing, communion
This is chicken soup, food for the soul food
Release it right now and never will you hold, dude
If you don’t watch, watch what you go through
I was taught never talk, so I had to show you, surrender”

Du’s verses here show remnants of the head-spinning LOTUG flowâ€”the only thing that doesn’t sit right is his obviously bogus claim at selling “a couple million” after claiming not to care (note to Du: sales figures can easily be checkedâ€”then again, he “ain’t really countin'”). Still, Pete’s thumping, horn-laced beat is one of his heaviest in memory, and when he clocks in with the hook, it’s a wrap.

Scott Storch’s contribution “We’re a Different Kind” isn’t nearly as laudable, and the album’s low point comes in the form of “Who You Loving?” featuring Fundisha, a musically hackneyed track where Du shamelessly raps about cheating on his partner and neglecting his child (note to Du: absolutely zero sympathy points there). The star power and energy of Masta Ace, Ed O.G., Craig G, and Du is inspiring on “Let’s Go,” but the tired “take-it-back” pleads of their rhymes are hardly so.

While the producers use tons of horns, the effect is unlike the LOTUG sound. Most songs fall into one of two categories: heavy, loud street cuts and nostalgic, soulful ones. “Flash Forward” features a breezy arrangement including a trombone and trumpet section, and the standout “Negrociations” features smooth, sweet sax instrumentation as Du, Treach, FAM, and Black Prince Akeem discuss the need for change in the black community. The second half features a strong procession of cuts beginning with the grimy “Hi Def State of Mind” with the Phenom Cartel and the block-ready bangers “Surgeon General” and “We Gets Down.” “Pray For Rain” is DoItAll at his most introspective, a well-orchestrated song detailing his personal and spiritual struggles. Highlights are also to be found in the fresh closers “Curtain Call” with Black Ice and “Smile” with Mr. Cheeks.

Make no bones about itâ€”the DoItAll of 2010 is either a shadow of the mid-90s LOTUG rapper, or Marley Marl and K-Def had such a Midas touch that they made an average rapper sound great for years. “American Du” misses about as often as it hits but marks a great stride in the right direction for Du following “House of Lords,” and with cosigns from bona fide legends, I wouldn’t be surprised if he managed to put out more good music in the future. Although frequently forgettable, “American Du” has some great moments and solid cuts that East Coast fans should keep in rotation.