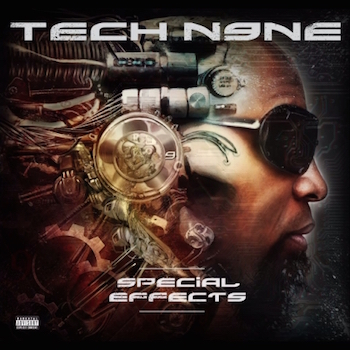 If a year goes by without a new album from Tech N9ne, sometimes two, something has gone seriously wrong. The last time he took a break was in the early 2000’s – but since “Everready (The Religion)” in 2006 he has taken no days off. Being consistent would mean nothing if it weren’t for his commitment to excellence though. Tech N9ne doesn’t churn out albums to feed his bank account – in fact he could probably lay back and let the rest of the Strange Musicroster record and release albums if that was all that he cared about. What drives Tech creatively is that he still has stories to tell and inner demons to exorcise.

Coincidentally or not one of those demons appears to be the passing of his mom as evidenced by the “Condolences (Skit)” on “Special Effects,” and I only say coincidence because Mother’s Day was this past weekend. It may be that the release date was planned out well in advance, but whether it was or not I join Wendy Day in offering Mr. Yates my condolences. I’m lucky enough to still have my mom and I’m grateful for her wit and wisdom every single day. I can hardly contemplate what I’ll do the day she finally passes, but I hope that day is a long time away.

Tech N9ne wouldn’t need personal tragedy to mine the depths of his pain though. He’s always been a rapper willing to walk the thin line between the secular and the spiritual, and “On the Bible” featuring T.I. and Zuse is the kind of song that pulls off both. In this case the holy tome of Christianity is being used as a promise, much like swearing to tell nothing but the truth under oath in a court of law. T.I.’s verse illustrates that it’s also a way to ward off evil, believing his faith protects him from lesser competitors who seek to do him harm:

“Face to the concrete, nose to the ground
Do him in the streets ‘fore his prayers hit the cloud
And the flash and a bang, it is rarely allowed
But a whole body down and a hole in the ground”

Of course no one ever asks the philosophical question of what happens when two people of faith pray to God for protection before an exchange of violence and one falls. Did the other simply not pray hard enough? Was he not sincere enough? This may seem like an abstract concept until you notice how many athletes thank God and Jesus after a victory and give them all the praise and glory. It almost implies their opponents were somehow not as humble before the Lord, even though there’s just as many men of faith (of all religions) on either side. A simplified version of this argument is the idea that God takes a personal interest in the outcome, like when you pray your team kicks the winning field goal, that somehow the omnipotent force of creation is going to cause the wind to blow the ball left or right after being kicked. The fans of your opponent may be invoking the same thing in prayer. Who does God side with then? Or does God side with no one at all and stay neutral? Or is there no such thing as God and everyone praying for a sports outcome they want wasting their time regardless?

Alright that’s enough of a segue on philosophy for now – let’s get back to the every day drama of Tech N9ne’s life. Being a well known rapper with a large following leads to situations like the one seen on the “More Psycho Messages” skit, where a disturbed female fan manages to get a rapper’s personal phone number and can’t leave well enough alone. It’s a familiar enough refrain in Tech’s career for him to have done two songs about crazy women before, but he brings in Hopsin for “Psycho B@%!h III” to give it a new twist. It’s far from the only cameo on Tech N9ne’s album though, and he’s a rapper who has traditionally spread the love by working with a lot of friends and familiar faces in hip-hop. That is evident on two of the singles already released, starting with the bass heavy N4 produced “Hood Go Crazy” with 2 Chainz and B.o.B.

The one that’s probably going to blow up even bigger though is “Speedom (WWC2),” co-produced by Eminem and Seven, and not surprisingly Eminem also raps on the track, but Krizz Kaliko turns in just as strong a performance as either of the others.

At over 78 minutes long (and that’s not even the deluxe version), Tech N9ne’s “Special Effects” is a dense tome with plenty of the Tech-nician’s technically proficient raps delivered in his trademark tongue flipping fashion. Save for Twista there are few commercially successful rappers who are as well known for the dexterity displayed while rapping fast, and not surprisingly Nina name checks him during the song. He’s just as interesting when he takes his time and deliberately drops bars at a measured pace though, such as over the heavy rocking guitar backdrop of “Give It All.”

The consistent sound of the album, and for the latter song in particular, is thanks to long-time collaborator Seven – the majority of the tracks on “Special Effects” are his. The spiritual soar and floating instrumentation of “Worldly Angel” are Seven’s, the minimalistic rewinding beats of “Bass Ackwards” with Big Scoob, Yo Gotti and Lil Wayne are his, and so on. In fact the conclusion I have to ultimately give for “Special Effects” is that as always Tech delivers an album that will keep his core constiuents happy. It may not grab converts out of the mainstream but Tech’s fanbase is so large at this point it doesn’t need to. He will continue to tour successfully and eat off of having cultivated a loyal base that extends far beyond the confines of Kansas City.